10 Most Insane Weapons In The World FAEs such as First-generation CBU-55 fuel-air weapons saw extensive use in the Vietnam War. A second generation of FAE weapons were based on those, and were used by the United States in Iraq during Operation Desert Storm. A total of 254 CBU-72s were dropped by the United States Marine Corps, mostly from A-6Es. They were targeted against mine fields and personnel in trenches, but were more useful as a psychological weapon. The US military also used thermobaric weapons in Afghanistan. On 3 March 2... 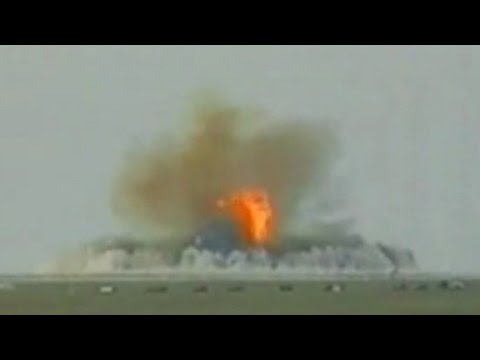 Kind of over dramatized. There’s nukes that’ll Wipe out whole cities. Maybe The Ancestors of all bombs will be better?

But, more likely to be used because not nuclear. Plus, you’re turned to jelly or have the oxygen sucked out of your lungs. Or both.

I mean I would take one if it was for free.

I bet Prepper10 and Detonics has at least one each of those.

Explosive device work by either flash,blast, fragmentation or a combination of all of the above. This regardless of of it being a Nuke or a fire cracker. Some are designed with a secondary reaction whose effect happens after the initial explosion.

Flash - travels at speed of light, intense heat that ignites any combustible in close proximity to the intial explosion.
Fragmentation - shrapnel traveling supersonic
Blast - travels at the speed of sound and is simply a over pressure of air

A fuel air bomb uses concussive force (blast) to project atomized particles of a volatile combustible liquid (fragmentation) and a secondary explosion (flash) to ignite.
The secondary effect of course is the ignition of the fuel/air mixture creating heat and consuming the available oxigen.
Nothing more than a large Molotov cocktail dropped from a plane.