My local USPSA club is having their first match of the year tomorrow. All 4 stages will be classifiers. I dunno… Do you think 360 rounds of ammo will hide the fact that I’ve barely been near a shooting range all winter? 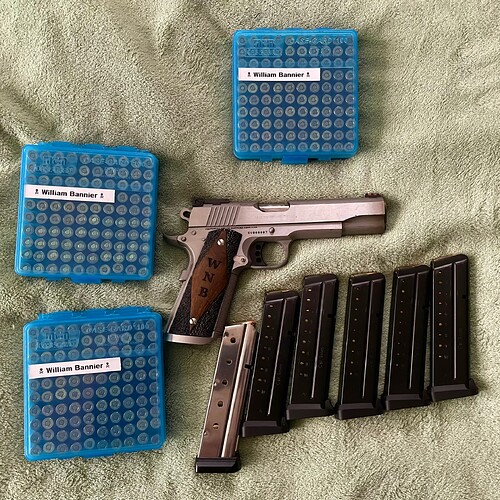 All 4 stages will be classifiers

Yikes, and they don’t even give you a few weeks into the season

All I see are dollar bills

All I see are dollar bills

That is the last of the ammo I bought prior to the mass shortages so not as many dollar bills as you think. I will probably use less than 100 rounds with the stages all being classifiers. I just have a bad habit of over preparing.

I’m glad my wife understands and sometimes enables my addiction.

You have a nice setup there.

Are those Wilson Combat mags? I found a sale on the a few weeks ago at Primary Arms and got them for about $28 each. They are definitely worth the extra money to be sure they feed.

Are those Wilson Combat mags?

Actually, they are Mec-Gars. I probably overpaid a bit at the time but I’ve never had an issue with them failing to feed.

$28 is a pretty good deal for Wilson combat. Nice score!

Actually, they are Mec-Gars. I probably overpaid a bit at the time but I’ve never had an issue with them failing to feed.

All of my CZs’ non-CZ mags are Mec-Gars and they have run flawlessly so far.

Good luck! And no you can’t shoot all of that ammo and make up for the time it takes to shoot it even with all A zone hits :-). But I always bring far more ammo than the match calls for. One can’t predict reshoots.

Our season starts on 4/11 and I registered for the match in my exuberance then remembered I have surgery before and won’t be in any shape for summer biathlon. I requested I get withdrawn. At the very least it would be a very bad idea to have someone on heavy pain killers (according to my Dr.) handling a PCC and that’s if there weren’t other issues, but there are. There’s a Steel Challenge match later in the month and I hope to make that.

Wow…. Not sure how that could have gone worse. First two stages were a big fat goose egg thanks to several mikes and a couple of no shoots. Did OK on the last two stages but not great. I guess we’ll see what the damage is when they upload the scores to PractiScore tonight. This is my 3rd year and I was really hoping for a decent classification by the end of it. Not gonna happen if I keep shooting like today.

On the plus side, it was a good thing we did classifiers today. The field was a mud pit with groundhog mounds. If we had been running around shooting regular stages instead of standing stationary, we would have all fallen on our asses and/or broke an ankle.

If anyone is interested, I’ll post my scores later tonight after they go up on PractiScore. It won’t be pretty though.

Wow…. Not sure how that could have gone worse.

The clubs I shoot at also do 100% classifiers as the first match. After months of no shooting it’s the pits. Maybe it’s a good thing that I have to sit that 1st match out at the one club.

My problem in the past was butterfly fart loads and the odd malfunction. As you know malfunctions kill the score. Maybe I should have disassembled those cartridges and remade them. But I’m pretty much done with them now and have switched to full power ammo in my PCC. Last match the gun ran fine. I just need to be able to get to a match in working order.

Copy and paste is not being my friend tonight so here’s a direct link to my scores on PractiScore. I ended up placing 35th out of 36 shooters today.

On the upside, the one guy I did beat was in my division and shooting major whereas I shoot minor.

It sux to zero out. But on a positive note the scores will get better!

I have to ask, despite all of that it was shooting with good people, fellow shooters, did you enjoy that?

I have to ask, despite all of that it was shooting with good people, fellow shooters, did you enjoy that?

My favorite saying is, “the worst day at the range still beats the best day at work.” While my competitive side wasn’t happy with the results, the rest of me was happy to be back out there again. I always enjoy a day with a gun in my hand and a target in my sights.

I still hear my Dad’s wise words. Words that I in particular heard often…

“Son everybody loves some ass, but nobody likes a smartass”

Guess what I am just saying is that I have known a long time I have a problem. They say that’s the first step. I just can’t seem to get past that first step… 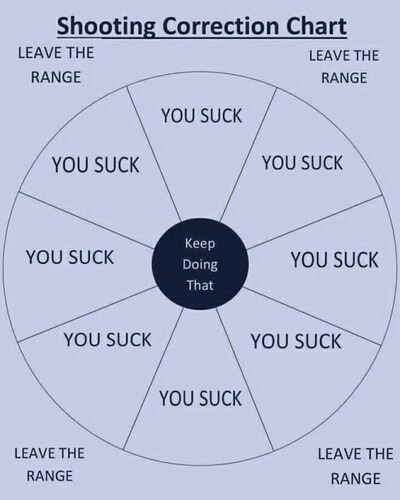 , “the worst day at the range still beats the best day at work.”

Exactly the way I feel about it!

Well, the scores are on the USPSA website now.

I am officially categorized as “D” based on my scores from Sunday and a couple other previous classifier stages.