223 vs 556: Understanding the Nuances of the Two Cartridges 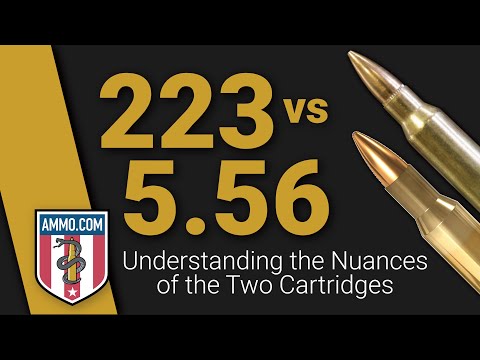 Many shooters will assert there is no difference between .223 Remington and 5.56x45mm NATO and that you can safely fire both from the same rifle. Others will contest that assertion, “The two ammo types are different!”

But which one is right? Who is correct?

Although the external dimensions of the cartridge case for .223 Rem and 5.56 NATO are identical, the chamber dimensions are different with the 5.56 NATO chamber having a 0.125” longer leade (the distance between the case mouth and the barrel rifling).

In addition to the leade difference, 5.56 NATO ammo is loaded for higher pressure based on the NATO cartridge specifications.

Therefore, 5.56mm NATO ammo should NOT be loaded into a .223 Remington chamber as it will cause higher chamber pressures during firing. This higher pressure can damage the shooter, rifle, or both.

However, shooting .223 Rem in a 5.56mm NATO chamber is perfectly safe, though some performance will be sacrificed due to the leade difference.

Most AR-15 owners will just opt for a 5.56 NATO chamber and shoot whatever they can get their hands on and forget about the difference, and this is ok. The 5.56 chamber can handle all the pressure a 223 or 556 round can throw at it.

However, some older AR-15 rifles will be chambered in 223 Remington, and this is where problems can arise. As 223 and 556 are dimensionally identical, it’s important to make sure you know what you’re shooting before you load up your mags.

I don’t believe we have a single 223 or 5.56 NATO chamber. We surprisingly, only have a half dozen or so of the .224 bores. They are either Wylde or Valkyrie. We will get more, but they will be more Valkyrie or some CLEs.

We have been talking a .204 bore or two to build a couple of highspeed pairie dog launchers, for more aerobatic red-mist fun. We might as well, as we actually do have a problem, and I am not a fan of poison.

204 Ruger unzips chucks like they’re made out of Jello. I love the 17 HMR too, but it does feel like even the slightest hint of wind can send its bullet into a different area code.

Yep the 17 is fun, and like the other rimfires its good training for wind. I see a CZ with all three barrels in our future.