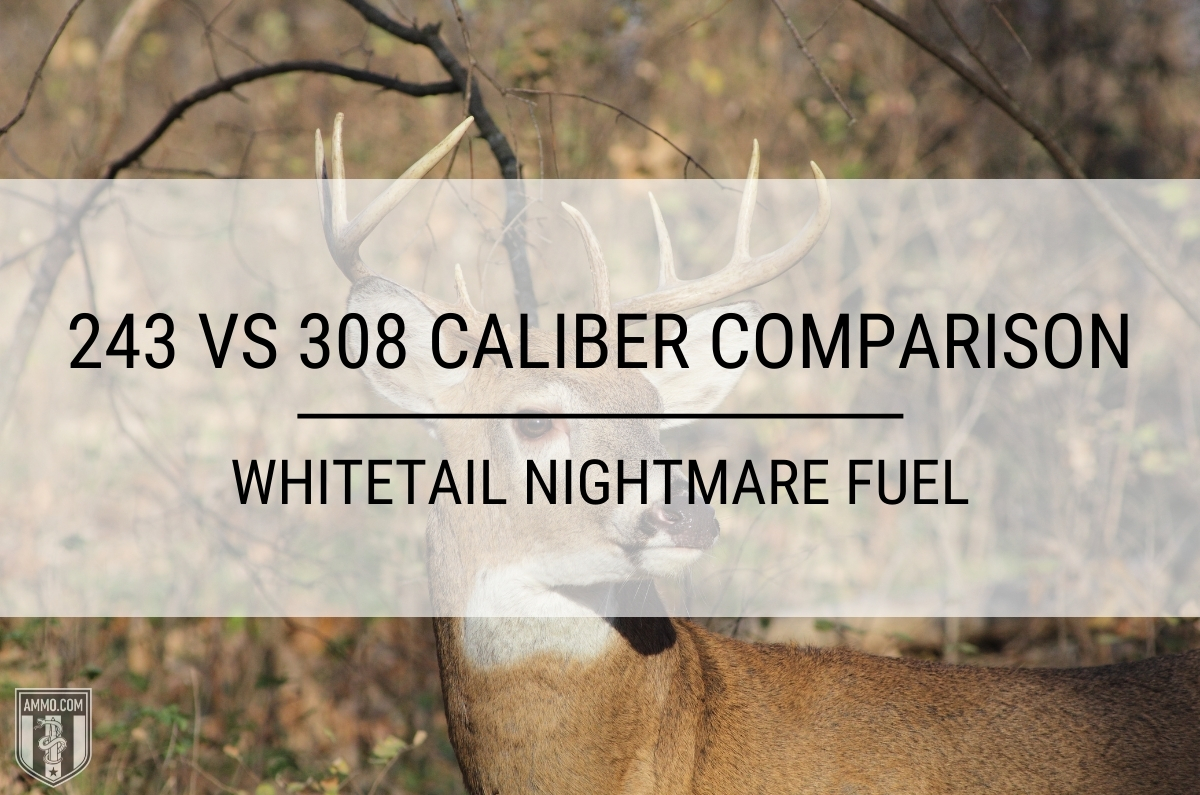 When it comes to medium to large game hunting, two rifle cartridges stand out from the rest, 308 Winchester and 243 Winchester.

These two rifle cartridges offer a wide variety of ammo to meet your needs for varmint hunting. From Pronghorn to prairie dogs to antelope to Whitetail deer, no varmint is safe from the 243 Winchester or the 308.

But which cartridge will suit your needs best for your next hunting rifle?

In this article, we will take a detailed look into the pros and cons of each rifle cartridge to help you pick the best cartridge for your needs.

Time to break out the camo ghillie suit, the scent eliminator spray, and tree stand because we are putting the 234 Win and the 308 to the test in the field!

If you’d like to poke the bear on any online hunting forum, all that’s needed is to proclaim that “243 Win is best!” Or conversely, “308 Win is best!” And then sit back and watch the fireworks.

There’s no denying that both cartridges are excellent at effectively and ethically harvesting medium to large game animals, but which one truly is better?

Both cartridges are effective at long range and have enough muzzle energy to take down a mule deer at 400 yards.

The 308 Win was introduced in 1952 by Winchester in its iconic Model 70 bolt action and Model 88 lever action rifles. The cartridge was originally developed by the US Military to replace the aging 30-06 Springfield that had served through two World Wars and Korea.

Though the 30-06 had served valiantly, the US Military wanted a more modern cartridge that would be suitable for use in a magazine fed, select-fire battle rifle that was compatible with a short action and was lighter than the aging 30-06 Springfield. The 7.62x51 mm NATO round was developed to meet these needs and the M14 was adopted as the United States’ new battle rifle. The M14 and 7.62 NATO served briefly in Vietnam before being replaced by the M16 and the newer 5.56x45 mm NATO (civilian designation: 223 Rem).

Winchester picked up the 7.62 NATO and quickly adapted it for civilian sale, rebranding in the 308 Winchester. Seeing the wide-spread success of Winchester’s new cartridge, other manufacturers were quick to add a 308 Win offering in their rifle lines (such as the Remington 700 and Weatherby Vanguard).

And the rest, as they say, is history!

Since its introduction, the 308 Win has become the quintessential hunting cartridge, with enough stopping power and range to harvest almost any large game animal in North America. With proper shot placement, a 308 can even take down the great bears (but I think I’ll take a 300 Win Mag or 338 Lapua Magnum if I’m going to the Kodiak Archipelago!)

Furthermore, the 308 Win has been the long range ammo of choice for military snipers and law enforcement sharp shooters for well over 60 years (until recently when the 300 Win Mag and the 6.5 Creedmoor started gaining popularity in these circles).

The 243 Winchester was introduced to the civilian market in 1955, just 3 years after the 308 came to market. The parent case for the 243 Win is actually the 308 Winchester that has been necked down to accept a .243” diameter bullet.

The 243 Winchester became extremely popular with varmint hunters who were looking for a cartridge with a flat trajectory and less felt recoil compared to their 308 hunting rifles. They also wanted enough stopping power to take down Whitetail deer, Pronghorn, Mule deer, and Antelope.

The 243 Win received massive commercial success in a rather short timeframe due to several factors.

The first was an expose done in Field and Stream by editor Warren Page, who gushed about his love affair with the 243 in his columns.

The second was actually a massive faux pas by Remington, who released their new cartridge, the .244 Rem, the same year. The 244 Remington was developed by necking down a .257 Roberts case (which itself was a necked down 7x57mm Mauser case) to accept a 243-caliber bullet.

The mistake that Remington made was not in the design of the 244 Rem cartridge but instead the choice of barrel twist rate.

Remington’s initial design called for a 1:12” rifling twist rate for the new 244 Rem cartridge. Unfortunately, the slower twist rate was unable to stabilize the longer and heavier 100-grain bullets (which are preferred for deer hunting).

A bullet that is not rotating fast enough before exiting the barrel can have a propensity to tumble in flight and cause “keyholing” (this is when the bullet enters the target sideways, and the resulting hole looks like a keyhole).

A destabilized bullet massively reduces accuracy and lethality, making the cartridge essentially unusable for hunters. Luckily for Winchester, their rifles chambered for 243 Win all had 1:9” twist rate barrels, which had zero issues stabilizing a 100-grain bullet. This made the 243 Winchester the superior choice over the Remington offering.

It’s time to start our comparison of these two iconic hunting cartridges. Let’s start by taking a look at the specs for each. 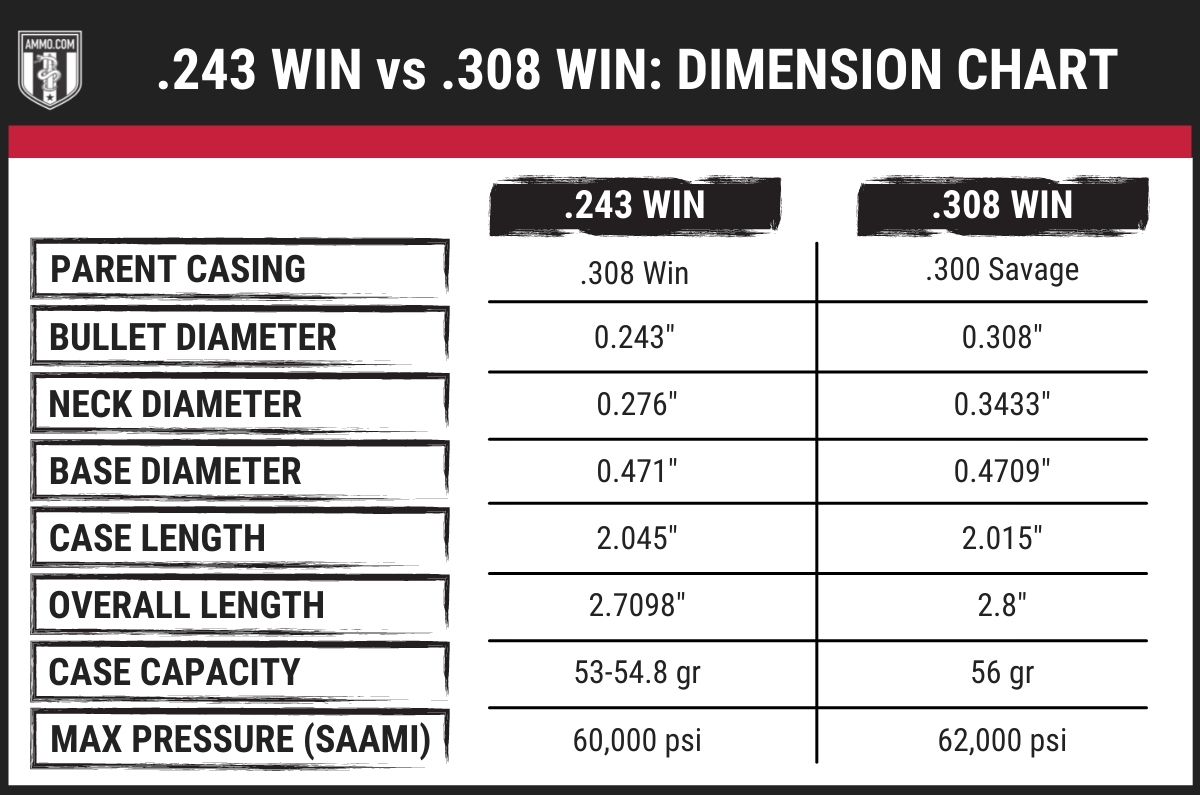 As we mention previously, the parent case for the 243 Winchester is the 308 Winchester. To create the 243 Win, the 308’s neck diameter was reduced to accept a 243-caliber bullet, and a little material was taken off the top of the cartridge. Otherwise, the cartridges have extremely similar dimensions.

The case capacity of each is almost identical (56 gr vs 54 gr H2O) which allows for lighter .243 bullets to be fired at an extremely high muzzle velocity. Furthermore, the case length is almost exactly identical within a few hundredths of an inch.

However, please note that the maximum allowable pressure for the 243 Win is a full 2,000 psi lower than the 308 Winchester. This won’t matter if you only shoot factory loads, but if you reload and like to push the envelope, make sure you’re watching for pressure signs (flattened primers, case head extrusion, etc.) if you plan to load your 243s hot.

One of the massive advantages that the 243 Winchester offers shooters is extremely low felt recoil. Shoulder fatigue and recoil anticipation are real problems when it comes to downrange accuracy.

Now I know that you might be thinking to yourself, “Oh come on Chris, the 308 recoil isn’t that bad!” And you’re mostly right.

The fact of the matter is that less recoil will promote enhanced accuracy with most shooters.

The biggest cause of pulled shots at the range is trigger jerk and this is most often caused by recoil anticipation. This happens when the shooter actively pulls the trigger because they are expecting the recoil, which dives the barrel of the rifle down. This pushes the shot low and can let that trophy Pronghorn bound away unscathed (and probably laughing at you in the process!)

Both the 243 Win and 308 Win are extremely accurate rifle cartridges. The 308 Winchester was the round of choice for sharpshooters in both military and law enforcement circles for well over 60 years (though some departments are switching to the 6.5 Creedmoor or the 300 Win Mag).

I will give a slight accuracy advantage to the 243 Win here only due to its flatter trajectory and lower recoil. Shooters will often report that they just “shoot their 243 better” and this is often the reason why.

However, all things being equal with proper shooting technique and trigger control, there should be no discernable difference in accuracy between the 243 and the 308.

Now we get to the fun part! Or the eye-rolling part if you think ballistics tables are akin to differential calculus.

Regardless of which camp you find yourself in, our team here at Ammo.com has put together some deer-slaying 243 and 308 ballistics charts for you to compare and contrast the numbers on these rifle cartridges.

Very interesting read, I have no .243 experience, seems by the comparison chart they are largely the same, so how is recoil so different?

The article would encourage me to look into it, but the abundance of .308 in relation to other calibers makes it unlikely I’d remove it from my collection.

243 has roughly half the recoil, with the caveat that everyone perceives recoil a little bit differently. It’s a great round if you want one gun for deer and varmints, but you’re right – the abundance of 308 ammo makes it pretty much one of the best regardless of its relative ballistic performance.

I’ve owned both, and I still own a .243
I think it is truly one of the most under-rated cartridges in the U.S.
And yes, the recoil difference is very significant!

So, given the above, yeah, the .243 would be significantly less than the .308, but neither would be particularly bad recoil.

Here is a chart giving some example recoil energy levels that addresses the named calibers:

Apples to Oranges. My first thought was .243 vs 6mm Rem would be more of a Orange vs Orange. All this recoil talk did get me thinking how recoil is different in various rifles. In our 308s there is a very marked difference in felt recoil using the same exact cartridge. So I looked around and found this from 3 yrs ago at Snipercountry. 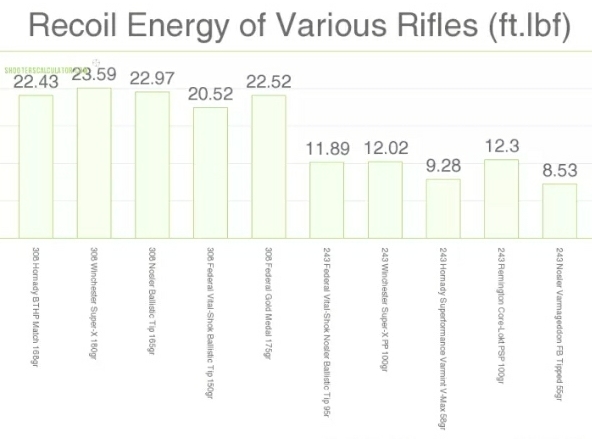 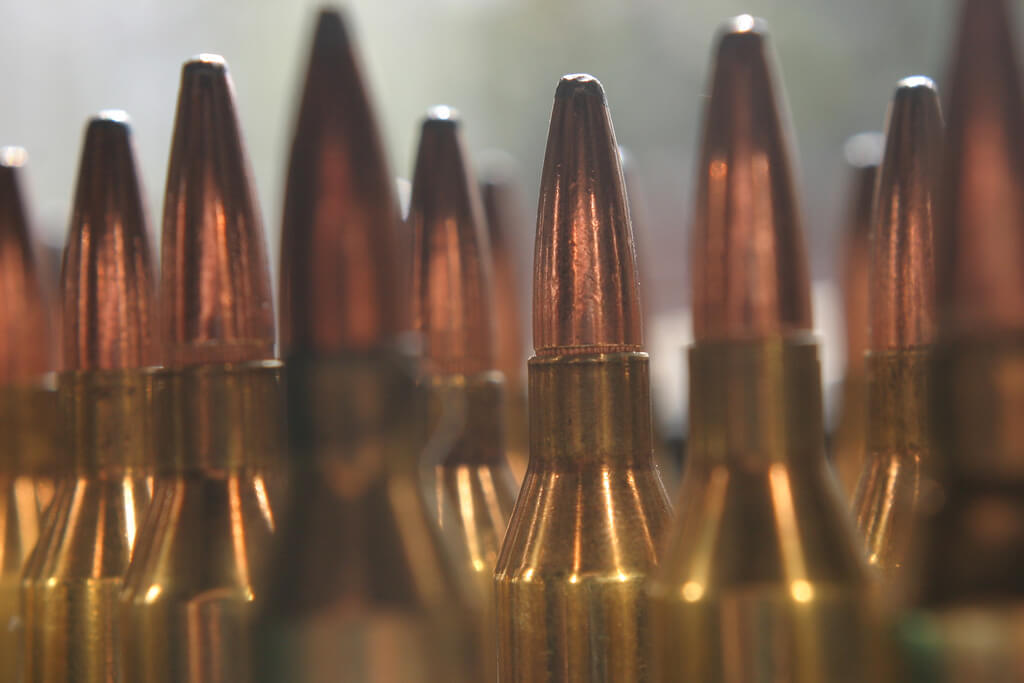 It’s always a fun and informative exercise to put two cartridges up against one another. In this case, it’s the .243 vs the .308.

Back in the day the 6mm was a bit of a Unicorn for the American Hunter. Because it was possible to have a rifle with half of the recoil of a 308 and still take a whitetail. Add to that it was accurate as all get out. Pretty cheap too. Two facts that still made it a good starter round for PRS 50 years later.

George Gardner used to shoot a .243 in competition. Now he shoots a 6mm GT last I heard. Like George, I like to shoot a lot. He’s Semi Pro and sure knows his way inside, out and around a rifle. I ain’t even good enough to be a poor wanna-be. But for me the strike against 6mm bores was the barrel life. The 1,500-3,000 rounds vs 5K-10K for the .308 matters to a working guy that likes to shoot.

Admitedly having a Savage, a Remage, or anything like them takes the Gunsmith out of the cost of ownersip, well at least for barrel swaps. Add to that a Savage is crazy cheap. Take offs for only $300.00, can’t beat the cost. Heck the ammo to wear it out costs 5 times that. Course you’ll probably need to fire lap it and clean it with the rod chucked up in the Dewalt.

Other than being gifted one, I’ll keep shooting the 308s. 110gr at 3300fps or a 180gr at 2700 or anything in between gets it done. I think the Hot Tip for mulitiple cartridges in the same rifle would be an ATN scope for the multiple zeros in different memory profiles. If I did buy a factory BA 6mm to shoot and feed, I definately lean more toward the 6mm Creedmoor for our Savage.

Really, Gunsmiths are more about the time than the money. Last time for us was 6 weeks, all of the good smiths are usually busy folks. The cost of a premium barrel and time matters to competitiors even more than us. For them accuracy is paramount, but so are good smiths, and that leads to time…

John Snow (of Outdoor Life) was writing a piece about developing his own cartridge. He built a couple of rifles with the help of George Gardner of G.A. Precision, then wrote his piece on his necked down wildcat from the 6.5 Creedmoor and rolled on.

(Behind the Bullet: 6.5 Creedmoor | An Official Journal Of The NRA)

George however was still shooting it in PRS couple years later where Snow’s 6mm Creedmoor proved to be a pretty good choice. The rest is history as they say.

Now 243 vs 6mm Creedmoor? Hmmm…
George had a more than a little something to do with that 243 usurper. Easier on barrels than the 243, and it will stretch out to a 1000 better. He knew both well and he made the switch. Of course he shoots the GT now, but factories aren’t making that.