Looking for recommendations on going 10 vs 16 inch 300 blackout. I reload and will probably stay within 110 grain and 124grain bullet weights. Suppression isnt my major focus.

I Saw mr. Guns and gear video on 300 blackout and it looks like the 16 inch barrel provides maximum ME in these loads.

I guess I wander if anyone has real would comparison on ME between the two barrel lengths and would it really make that much difference. 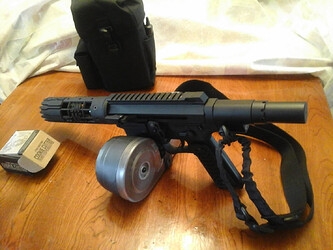 All mine are 16 inch, i’m happy with them. guess it would boil down to if you want a rifle or a pistol.

I haven’t gotten around to playing much with .300 BO, yet, but several years ago I was doing a fair amount of experimenting with .308 rifle projectiles in 7.62x25, and have 10" and 16" uppers in that caliber.

One thing I noticed, is that with the heavy, subsonic loads (150gr and up), the muzzle velocities tended to be lower with the 16" barrel, than with the 10" barrel, while the reverse tended to happen with the supersonic loads. The reason was likely due to the gas port on both barrels being at the location normally used for 7.5" 5.56mm barrels. With the subsonic bullets moving slower (spending more time in the barrel), and more barrel length between the gas port and the muzzle, the 16" barrel let the gas pressure drop off enough to slow down the bullet before it left the barrel.

If you are going to focus on the lighter, faster loads, it may be worth it to buy an adjustable gas block or adjustable gas tube, to tune the gas system to your loads. Most manufacturers are likely to size the gas port larger than needed for the supersonic loads, to make cycling more reliable with the subsonic loads.

Thanks guys. Originally inwasbthinking pistol but with the.ME gain from 16 inch barrel made me stop to think things over and so more research.

If I am going to shoot rounds 110, 124 grain the extra ME means more down range effectiveness.

I guess if I wanted some sub sonic I could play around with loads to get the best performance and suppression.

I have a pistol and rifle. Just got a cronograph . I will try both guns with the same ammo and give you some speeds soon. If you want muzzle energy from an AR platform get a 6.5 Grendel. I’m getting 2250fps w/130 gr bullets out of a 12in barrel.

That would be super. I would definitely appreciate it.

If you want muzzle energy from an AR platform get a 6.5 Grendel

^ This. I cannot wait to build one.

If you want muzzle energy from an AR platform get a 6.5 Grendel

^ This. I cannot wait to build one.

Don’t forget to invest in some quality hearing protection as

the 25/45 Sharps is a good round also, A friend bought an upper and it knocks Deer into cornfield heaven…

I’ve heard that as well. Hard to find ammo?

I just trying to get optimum muzzle energy from 300blk.

Why not get one already in a known caliber that isn’t priced like the niche that it is? You can get other calibers that are very known.

I am just trying to figure people out, nothing more.

Price, cost and value are all subject to the eye of the beholder

I don’t find the price for 300BO rounds a deterrent, but if I have the money and the desire then any round is game.

I’ve heard that as well. Hard to find ammo?

I reload so it wouldn’t be that bad. I like the idea of using same mags ,lower, bolt, etc of my ar and get another caliber to play with

yep I think for me the 16 inch barrel is the way to go.