I want to build a completely tricked out 300BlkOut SBR from a pistol base. My question to this forum is: which is the most important to have from the quality stand point, the upper or lower. I keep getting mixed responses.

I’m sure there’s someone that will disagree but I’m voting UPPER. That’s where all the action happens, from the gas system , the bolt movement and lock up(yes it technically locks into the barrel extension but the upper aligns those parts), the rail/optics mount down to barrel fitting. If you look at some of the home gunsmith forums you’ll see AR lowers built from sheetmetal/screws and even ones carved from wood. The lower is rather simple. As long as the magazine well/release is in spec to allow proper feeding, lowers are rather forgiving. Add in one piece drop in triggers and they get simpler. The only real concern is how well the two halves fit together.

That said, If you don’t have either yet, just buy a matched set from a reputable manufacturer.

Starting with a “pistol”(either marked as such on the 4473 or assembled into that configuration first) is a good choice. You can always convert a pistol to a full rifle and still go back to the “pistol” configuration. Not the other way around(a rifle is a rifle and never anything else). There is nothing that says you can’t “un-SBR” it by putting a longer barrel on it, nor convert it back to a pistol by removing the stock. If you were to SBR a rifle, you can only have it as a rifle or SBR.

Thank for the reply. I’ve got two rifles now. A Anderson AR-15m4 that I truly love and tricked. And a Aresonal SLR 107 that captured my heart through the tear down and rebuild that I did. So I am/was leaning towards a Anderson lower and and BCM upper for this complete build. The Anderson lower in completely naked. Meaning that I’m gonna have to put everything in it. The trigger, the safety, the whole 9. But I am surly gonna keep in mind what you’ve said to me.

I’m voting lower. Particularly, get a lower with some nice features. Having an ambi bolt release is much nicer than most people would expect - makes time reloads faster.

If you’re going for a SBR, don’t cut corners on the serialized part (the lower). You can always swap out the upper, you can’t swap out the lower.

I agree with @CzechsixTV though - get a matched set.

[quote=“brianpurkiss, post:4, topic:698”]You can always swap out the upper, you can’t swap out the lower.
[/quote]That is a great point I hadn’t thought of. Being stuck in a non-NFA state, I was thinking more about inherent accuracy of the firearm(which is mostly built into the upper) and forgetting about the serial number issue.

Barrel is more important for accuracy than the upper receiver.

And I’d upgrade the trigger before I upgrade the barrel as it’ll provide a greater return on user accuracy than a better barrel would provide on rifle accuracy.

I’m a huge fan of upgraded lower receivers though. The details of a good lower receiver are so easily under appreciated. Here’s mine: https://www.rainierarms.com/rainier-arms-ultramatch-billet-ambi-lower-receiver-mod-3-w-o-qd/

Ambi bolt release. Ambi mag release. Flared magwell. QD mount built into the receiver. Little lip by the trigger/mag-release which gives a positive place to rest your trigger finger when you’re transitioning. Uses a screw for the bolt catch instead of a pin. Enlarged trigger guard for gloved hands.

If you want any of those features in your SBR, you gotta get them at the beginning. You can upgrade everything else, but you can’t upgrade a registered part.

I have one lower receiver with my good trigger, preferred pistol grip, and then several uppers.

@brianpurkiss, thanks for your take. I will be taking everything into consideration.

[quote=“brianpurkiss, post:6, topic:698”]I’d upgrade the trigger before I upgrade the barrel as it’ll provide a greater return on user accuracy than a better barrel would provide on rifle accuracy.[/quote]I completely agree. I may have said it wrong, I was speaking of “mechanical” accuracy. If one thinks of the barrel/upper/bolt as similar to those of a bolt action, those are parts the shooters can not influence the accuracy of. In reality, any decent(modern production, we’re not talking about AK barrels forged in an Afghani cave with rocks) barrel is likely more accurate than the average shooters ability. BUT, a bad shooter behind a great barrel and using a great trigger is still a bad shooter.

As we both said, a matched pair(upper/lower) is the best bet(think glass bedding). If you have any quality upper/lower combo that locks up tight, all is generally good. The greatest trigger/barrel in the world wont make up for the upper shifting around on the lower or the optic mounts shifting. It would be no different than putting a match grade barreled action in a loose fitting stock. A decent barreled action, PROPERLY glass bedded in a decent stock will have an enormous “mechanical” accuracy advantage. The rest is shooter.

The “shooter” will always benefit from a better trigger, ergonomics, optics etc. That is subjective though. The biggest thing is “mechanical” consistency of those parts. An optic that tracks well through turret movements, triggers with consistent travel/weight/reset, stocks that aren’t effected(or affected…I always mix those up) by temp/humidity… Triggers, for instance, are not the same for every body. I know guys that RAVE about 2 stage triggers. I HATE THEM!!! There are those that prefer MilDot to MilRad, peep to post and V notch and others who prefer(and shoot better with) the dozens of other reticle/sight types available.

In the end, we live in a world with a plethora of quality AR(or general gun) parts at our finger tips. NO, literally…Just jump online and it’s there. When I started getting into firearms seriously(95-96), you were at the mercy of the guy earning commissions at the gun store. They pushed the highest profit, and not always the highest quality, stuff. Now, ONE bad review changes that. 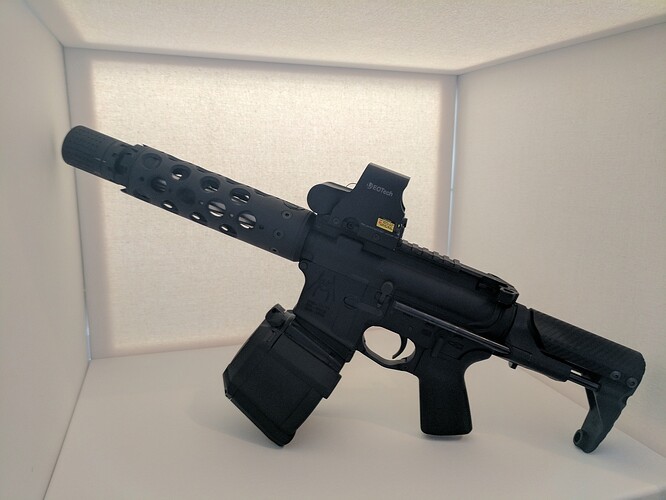 1154×866 203 KB
For inspiration: This is my 8" 300 AAC BLK PDW/SBR build.
My two cents after several SBRs is to get a matched upper/lower if possible. But the fact is you’ll end up swapping uppers quite a bit until and unless you register multiple lowers so that you have complete guns instead of always having to mix/match/swap.
Gca1971 (Geo) June 4, 2017, 5:56am #10

@brianpurkiss and @OptOutOfGunControl thanks for you guys info. I’m actually gonna go with a Anderson lower. Mainly because my last name is Anderson. And secondly I have a Anderson 223/556 and I like it. The upper is gonna be a 9" BCM and the rest will just custom to my liking.