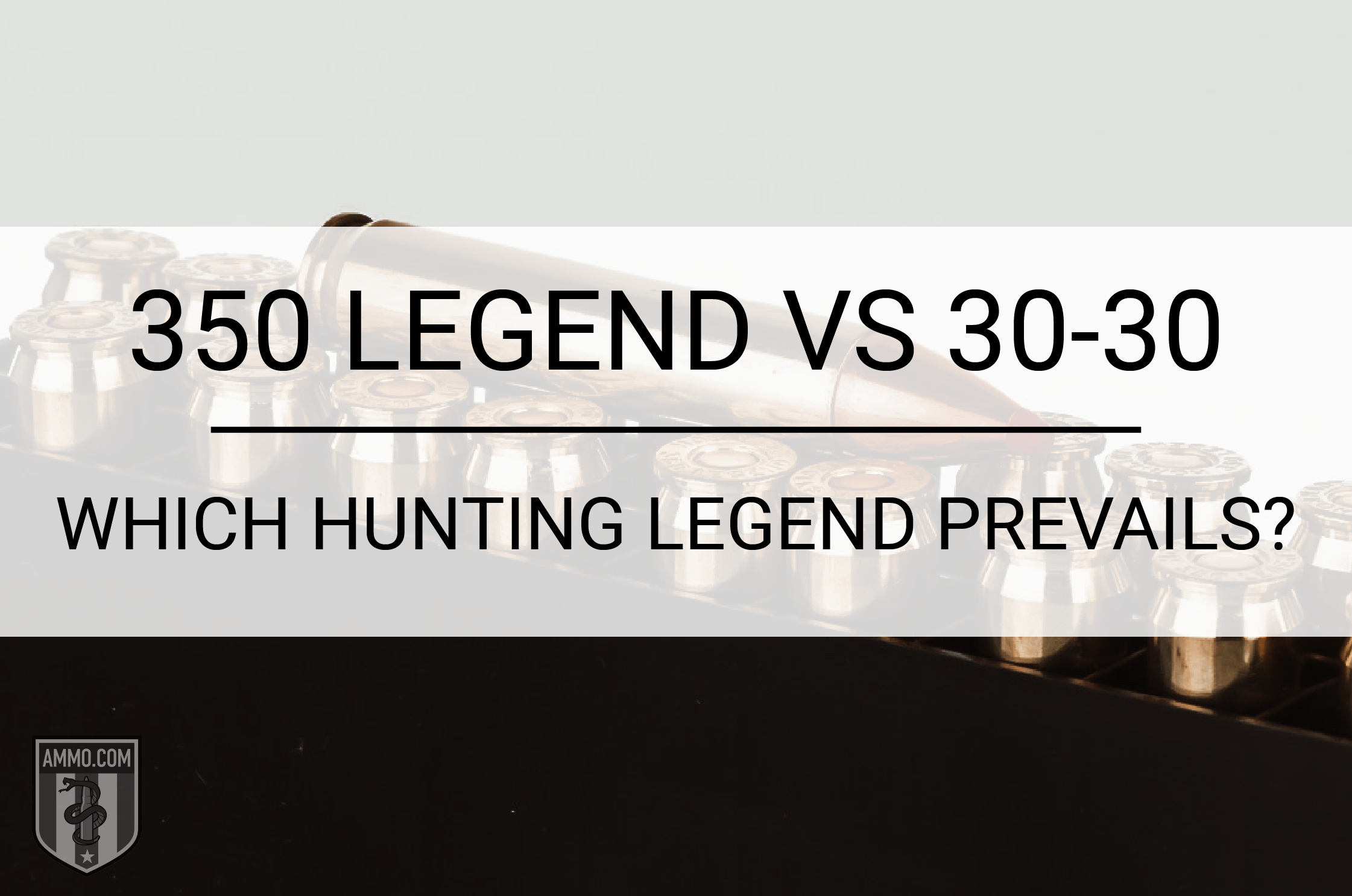 Many deer have been harvested using a 30-30. It was marketed as a sporting cartridge, and it’s held that reputation for over 100 years. A new cartridge on the market is ready to challenge the legendary 30-30. The 350 legend is eerily similar, with a few slight modifications to meet hunting regulations.

Which will win the 350 Legend vs. 30-30 legendary showdown? Keep reading to find out! Here’s a hint, a new legend is in the making.

The 350 Legend is a straight-walled cartridge designed to meet several states hunting regulations that ban bottleneck cartridges because they are more efficient due to the higher case capacity.

The 30-30 is a bottleneck cartridge similar to the 223 Remington. That’s the primary reason for the difference in bullet diameter and weight of these two calibers. 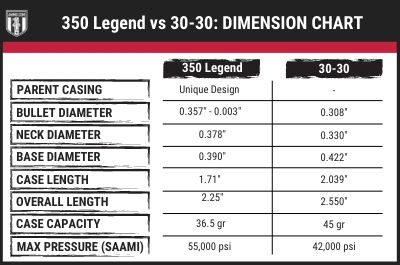 The 350 Legend will fire larger, heavier bullets than the 30-30 because of the bigger diameter. This gives the 350 Legend an advantage at close ranges, but it becomes a disadvantage at longer ranges.

How do the different size cartridges affect the felt recoil of each round?

Several factors go into felt recoil. The weight of the gun and the specific load you’re firing are two of the most important. Instead of listing every gun and load for each caliber, we will keep it simple and speak in generalities.

The 350 Legend recoil averages 8.5 foot-pounds. That’s very comfortable for the average hunter to shoot. You won’t have to worry about it bruising your shoulder while sighting it in for deer season.

The average recoil energy for the 30-30 Winchester is 14 ft-lbs. This is a lot more than the 350 Legend. However, there are plenty of rounds with much more! I used a 30-30 to shoot my first deer around age 12 when I weighed less than 100lbs, so 14 ft-lbs isn’t unbearable even for small shooters.

If you’re basing your decision on recoil alone, the 350 Legend has the least amount of recoil, but the 30-30 is still very manageable.

I think of trajectory as the path the bullet takes. It’s measured in inches of bullet drop.

Flatter trajectory bullets are best for longer ranges. However, in this case, these calibers have similar trajectories.

The 30-30 Win is a flatter shooting round with a drop of 2.6" at 200yds. It can effectively reach out to 300 yards, but it takes a skilled sharpshooter with a dialed-in rifle to consistently shoot 300 yards accurately, so it’s best to stay around 250yds or less.

The 350 Legend trajectory has a 7.6" drop at 200 yards, so it’s also not recommended to shoot over 250yds because as you increase the distance, the bullet begins to fall more quickly.

Neither of these rounds is intended for long-range shooting, so their trajectories are similar. 30-30 rounds have a slight advantage, though, so based on trajectory alone, the 30-30 wins this round.

The ballistic coefficient (BC) measures how well a bullet resists wind drift and air resistance. To say it another way, it’s how aerodynamic a bullet is in numerical form. The higher the BC, the better the bullet will shed the wind.

Heavier bullets will generally have a higher ballistic coefficient because it takes more force to move the flight path of a heavier bullet than a lighter one. The bullet design, weight, and other factors all determine the BC of a bullet. The Bc of these calibers will vary depending on the factory load you choose.

The 350 Legend has a BC that ranges between 0.186 to 0.264, which is not very impressive if you’re a long-range shooter but remember this caliber maxes out at 250yds and performs best below 200 yards.

Judging from the ballistic coefficient alone, the 30-30 has a slight advantage.

Stopping power is often spoken of in Sectional Density (SD). SD is how well a bullet penetrates a target. Bullet penetration is vitally important for hunting so that we make as ethical of a shot as possible.

Sectional density is calculated by comparing the bullet’s diameter and weight. The higher the SD, the more the bullet penetrates the target. This is a simplified explanation of penetration as other factors matter, such as bullet design, expansion, and velocity.

Winchester claims the 350 Legend penetrates 10% less than the 30-30 Win. This means we should give the slight advantage to the 30-30 once again.

When hunting within their effective range of 200 yards, these calibers shine. Both are favorites of whitetail deer hunters across the country. That’s often why the 30-30 vs. 350 Legend debate is heated amongst rifle hunters.

As I mentioned earlier, my first deer was harvested with my dad’s Marlin lever action 30-30 at 50 yards. We often hunt areas where 200 yards is a long shot, so a farther shooting caliber is unnecessary. I’ve also taken a feral hog, an animal known for its toughness, at 25yds with that same 30-30.

As a deer hunter who rarely shoots over 200 yds, the 30-30 is an excellent gun. While the 30-30 is a large enough caliber for elk hunting, I chose to go with a 270 Win that is flatter shooting and has a longer range.

The 350 Legend was explicitly designed for deer hunting. Had this caliber been around when I was younger, I would have preferred it over the 30-30 because of the recoil reduction. It can still ethically take down a deer out to 200yds, meeting some states’ strictest hunting regulations.

As much as it pains me to say this because I have so many great memories of using a 30-30, the 350 Legend for deer hunting takes this round because the recoil is less without giving up any range. This means you can get back on target quicker if you miss, and it’s better for introducing cautious shooters to hunting.

I don’t recommend either caliber for self or home defense. Using a rifle for self-defense asks for trouble because rifle rounds travel through walls and can strike family members or neighbors.

Though the lever-action 30-30 was used to help tame what remained of the Wild West in the 1900s, there are a plethora of better caliber choices for defending yourself and your loved ones. Like a 12 gauge shotgun or a 9mm pistol.

The 350 Legend has the same downsides as the 30-30 for self-defense which is why this round is a tie. Each caliber is best used for hunting, not for home defense.

When considering buying a new hunting rifle, you should look into the price and availability of each caliber. Remember that you will need to practice with the exact ammo you plan to hunt with; otherwise, your rifle won’t be accurate.

Because the 30-30 has been around for a long time, several manufacturers make 30-30 ammo, whereas only a few make 350 Legend ammo. This means 350 Legend ammo should be harder to find.

However, that’s not often the case because so many people own a 30-30 they’re always buying up the ammo as soon as it hits the shelf. Since fewer people own a 350 Legend, there is more of it available.

As far as 350 Legend vs. 3030 rifle options go, there are far more choices for the 3030. Most 3030 rifles will be lever-action with a couple of options for single-shot rifles.

Since the 350 Legend is still reasonably new, fewer gun manufacturers make a rifle for it. If you switch the barrel and magazines of a 223 AR platform, you can shoot 350 Legend from it. There are also a couple of bolt-action rifle options offered by Ruger and Savage.

An excellent way to save money and stock up on ammo is to reload. By reloading, you control all the controllable variables. You choose the exact rifle cartridge you want, the bullet weights, and the powder. It is more money up-front, but it’s much cheaper as you average it out to a cost per round.

Like ammo, reloading supplies are difficult to get sometimes, especially if they are popular among reloaders.

Since the 30-30 is such a popular lever gun, reloading is very common, which can be good and bad.

The great thing about handloading for 30-30 is that it allows you to stockpile 0.308" diameter bullets which are popular as a hunting round in 300 Win Mag, 308 Winchester, and 30-06 Springfield. So you’re not buying a bullet that only fits one round.

The Legend is a relatively new round, but it’s increasing in popularity amongst hunters in Indiana, Ohio, Michigan, and several other states, so reloading the Legend is also becoming more popular. However, the brass and 0.355" diameter rifle bullets are more expensive and harder to find than 30-30.

The bullet diameter is the same as a 9mm bullet, but rifle bullets and handgun bullets are not the same.

The 30-30 is easier to reload in the sense that the materials are easier to find and cheaper.

The 350 Legend is a rifle cartridge developed by Winchester Repeating Arms and accepted by SAAMI in 2019 for a deer hunting cartridge. These deer cartridges met the laws that previously required hunters to use a 450 Bushmaster or 444 Marlin in states with laws prohibiting bottleneck calibers for hunting.

The Legend resulted from Winchester ammunition wanting to produce a low recoil, heavy-hitting new cartridge that met the overall length and bullet diameter requirements of the hunting regulations for these several states.

In 1895 the 30-30 Winchester was the first small-bore cartridge that used smokeless powder. It is also known as .30 Winchester centerfire, 30 WCF, and 30 Winchester smokeless. A rival gun manufacturer, Marlin, adopted the 30 WCF for their model 336 lever action.

However, they didn’t want to credit their competitor, so they removed “Winchester” from the name and called it the “thirty thirty.”

The truth is I’m biased, as I grew up hunting with a 30-30 and loved it. However, had I been shooting the 350 Legend, the memories would have been just as great. The advantage goes to the 350 Legend because of the less recoil when everything else is very similar.

It pains me a little, but the new legend has overtaken the old legend of hunting cartridges in our 350 Legend vs. 30-30 article.

Continue reading 350 Legend vs. 30-30: Which Hunting Legend Prevails? on Ammo.com for ballistic data!

Only thing i know about the 350 legend is you can always find the ammo for one when nothing else is available.lol well that and the 224 Valkyrie.

find the ammo for one when nothing else is available

First time I ever seen it was at a hardware store sitting on the shelf all by itself a year or so back, hell I almost bought it just for that fact, I actually guessed it was a pistol round

A 5 inch greater drop at 200 is significant. It isn’t for me that’s for sure, but neither is the 30-30 really, and it’s probably killed more deer than any other cartridge in the USA.

As usual a good write up though.

What gave you that impression? Why, next you’ll be accusing me of offering discounts on ammo.