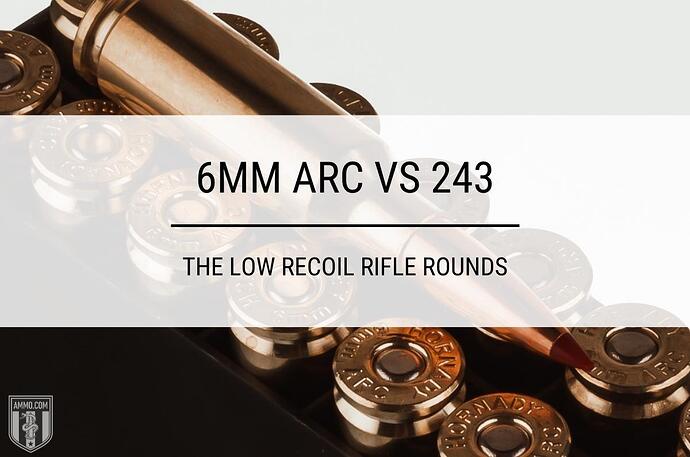 If you’re looking to introduce someone to shooting or hunting, it’s a great idea to begin your search by comparing the 6mm ARC vs 243 Winchester.

These rounds are eerily similar, which means some will argue it doesn’t matter which one you choose.

I beg to differ. It matters depending on your intended purpose. Each caliber outshines the other in certain situations, as we’ll see shortly.

We’re comparing each caliber in nine different categories. We’ll tally up the winner of each category and decide on a winner at the end of the article.

First, let’s begin with the cartridge similarities and differences.

The bullet diameter of each caliber is the same at .243". 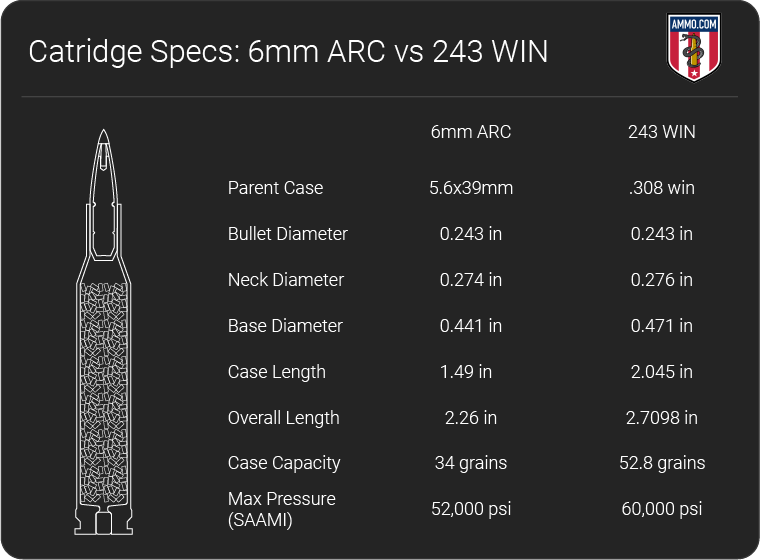 So how do these two cartridges perform when shooting the same bullet?

These calibers are often the first choice for introducing new shooters to the excitement of shooting and hunting because of the low recoil.

Less recoil makes it easier for inexperienced shooters to be more accurate because they will be less likely to flinch due to anticipating the kick of the gun when they squeeze the trigger.

Recoil is primarily determined by gun weight, bullet weight, and the amount of powder in the case.

Felt recoil will vary from shooter to shooter, depending on how well they shoulder the firearm.

While the average shooter won’t be able to tell much of a difference between the two, the 6mm ARC has slightly less recoil earning it the win in the category.

We call the flight path of the bullet the trajectory. It’s an arch due to the effects of gravity.

While the trajectory of most bullets begins flat, as it slows down, the bullet starts to drop faster and faster.

Most shooters prefer a flatter trajectory, and I say most because there’s always someone who just has to be different for the sake of being different.

Since these calibers shoot the same-sized bullets, the bullet velocity will be the primary determining factor for how flat each round will shoot.

The 243 Winchester has more case capacity, which means it holds more powder; therefore, it can propel the bullet faster, which translates to a flatter trajectory.

The bullet weight will vary your results, so these numbers are not exact; they are to give you an idea of how each caliber generally performs.

These calibers can be suitable for long-distance shooting, but they often lack the power to stay supersonic past 700 yards, which will negatively impact their trajectory past this distance.

The 243 Winchester is a flatter shooting round, which means it’s the winner of this section.

The accuracy of a round is difficult to calculate because so many factors go into it.

Felt recoil and bullet trajectory are two others we will use to determine a winner for the article’s sake.

Both rounds are considered very accurate and beloved by many shooters because of their ability to be precise reliably out to 400 yards.

However, the 6mm ARC has slightly less recoil, so shooters susceptible to felt recoil will find it easier to be more accurate with the 6mm ARC.

With that said, the 243 Winchester has a flatter trajectory, so shooters who need to maximize distance will prefer the 243.

This category is tied because each caliber is accurate and outshines the other in certain conditions.

The ballistic coefficient (BC) represents how well a bullet resists air/wind.

It’s a measure of bullet aerodynamics. A high BC is preferred and means the bullet will better resist the wind.

Calculating BC is rather complicated and irrelevant for this article; however, heavier projectiles typically have a higher ballistic coefficient than lighter bullets.

Since both calibers shoot the same bullets, the ballistics coefficient will be similar but not the same since they have differing velocities.

The winner of this section is the 6mm ARC with its high-BC bullets.

Stopping power is a relative term, and many argue it doesn’t matter if you have a well-placed shot.

This is why I believe stopping power still matters.

Stopping power can be measured in how big of a hole the bullet leaves and how well it penetrates the target.

This is incredibly important for big game hunting because you need a bullet to get through thick hide, bone, and sinew.

Sectional density is calculated by comparing the bullet weight and the bullet diameter.

The higher the number, the better it will penetrate the target.

However, there are other factors we must consider in terms of SD outside the shape of the bullet: velocity and bullet design.

Two bullets that weigh the same while traveling at different velocities will have different stopping power or penetration amounts.

The one with the higher velocity will penetrate deeper.

While expanding, bullets like the Hornady SST or Nosler Ballistic Tip expand on impact, causing a large wound channel but won’t penetrate as deep.

This is why there is often a compromise between penetration and bullet expansion when ammo manufacturers create hunting cartridges.

The stopping power of each caliber is very similar. That’s why many hunters use either caliber for deer hunting.

The 6mm ARC has a slight advantage in sectional density; however, the average deer hunter won’t notice a difference.

Hunting is where both rounds fulfill the same purpose. Neither round can ethically harvest big game like elk, caribou, moose, or bear.

However, they both excel when varmint hunting and deer hunting.

Since most shots will take place within 400 yards, each caliber has the power to bring down deer or antelope at that range.

Both calibers are accurate and easy enough on the shoulder to send round after round downrange while varmint hunting.

This section is a tie because both calibers can be used successfully for the same hunting purposes.

I’m not a big believer in using a rifle for home defense.

The primary reason is the increased likelihood of overpenetration. Instead, I’d rather use a shotgun chambered in 12ga or 20ga buckshot.

However, that doesn’t mean you can’t or shouldn’t use these calibers to protect your home if they’re all you have available.

If I had to choose a home defense gun chambered in only one of these two calibers, I would choose the 6mm ARC.

That’s because the 6mm ARC was designed for the AR-15 platform.

So, if it’s legal in your state, you can have a semi-automatic rifle with a 30-round magazine, which means less reloading and more opportunities to eliminate the threat.

Most guns chambered in 243 Winchester will be bolt-action rifles, which are not the ideal candidate for self-defense.

The 6mm ARC wins this category compared to the 243, but better home defense options exist.

The 243 has been around for many years, so numerous ammo manufacturers such as Federal, Hornady, Remington, Nosler, Barnes, Browning, and of course Winchester make 243 ammo.

This means you can find decent deals on it, but the good stuff is not cheap like all other ammo.

Federal hunting ammunition will cost you about $1.75 per round. At the same time, Hornady 95-grain SST will cost $2.75 for each trigger pull.

Since the 6mm ARC has only been around for a few years, there are not many ammunition manufacturers who make it.

Hornady is the company that developed the round and is the primary ammo manufacturer.

This means 6mm ARC ammo prices won’t be any cheaper than 243 ammo, but surprisingly they’re no more expensive.

The 243 Winchester has a slight advantage over the 6mm ARC in this section because of its availability.

Nearly every firearms manufacturer makes a rifle chambered in 243.

Some of the most popular are-

While the prices vary, you can still expect to pay $700 or more for the rifles above. If you’re looking for a budget option around $500, try the Savage Axis, Ruger American, and Mossberg Patriot.

The 6mm ARC isn’t chambered in nearly as many rifles, and the ones it is chambered in are generally more expensive than ones chambered for 243 Winchester.

The 243 Winchester wins this round because it’s available in more options and cheaper.

Reloading the 243 Winchester vs 6mm ARC

The best way to control the controllable variables and maximize your budget is by reloading ammo.

You can craft the ammo that cycles through your rifle the best because handloading allows you to dial in the details that factory loads don’t.

The 243 Winchester has been reloaded for decades and is still a popular caliber for reloaders.

This is good and bad. It’s good because many companies make the supplies you’ll need like primers, brass, powder, bullets, and dies. It’s bad because supplies will run low quickly in times of shortages.

The 6mm ARC is still a new caliber, but a few companies make the needed reloading supplies, and the information to properly reload this caliber is available.

However, the 243 wins this round because more information is available and supplies are much easier to find.

The 6mm Advanced Rifle Cartridge (ARC) is a new cartridge by Hornady in 2020.

The designers of the 6ARC wanted to create a round that would compete with the famous 223/5.56 in an AR platform, but it needed to shoot flatter at long-range.

That’s why they chose the 6mm bullet.

It’s based on the .220 Russian, like the 6.5 Grendel, which is why they’re very similar rounds when you compare the 6mm ARC vs 6.5 Grendel.

This caliber exploded in popularity among varmint and deer hunters because of its low recoil and adequate stopping power for hogs, whitetail deer, mule deer, pronghorn, and antelope.

It’s still one of the market’s most popular deer hunting calibers and will continue to be in the foreseeable future.

Even though these two calibers are used for similar purposes, there are apparent differences when we compare the 6mm ARC vs 243 Win side by side.

Neither round outperformed the other, winning 4/10 categories and tying in the other two sections.

The Hornady 6mm ARC has less recoil, a higher ballistic coefficient, more stopping power, and is chambered in a better home defense weapon.

The 243 Win has a flatter trajectory, has more guns and ammo available, and is easier to reload.

They’re both very accurate rounds and can be used to hunt varmints and mid-sized game such as deer.

I had a .243 Ithica gun. That was many years ago and it was a Finnish made weapon. That was a straight shooting rifle and it was accurate 1.5 inch groups at 200 yards all day long.

According to Hornady’s balastic program
my 6ARC is still supersonic past 1000 yds. That lets me stretch it out a long way. Still in a small frame gun. Never owned a 243.

They are pretty similar minus the AR-compatibility.