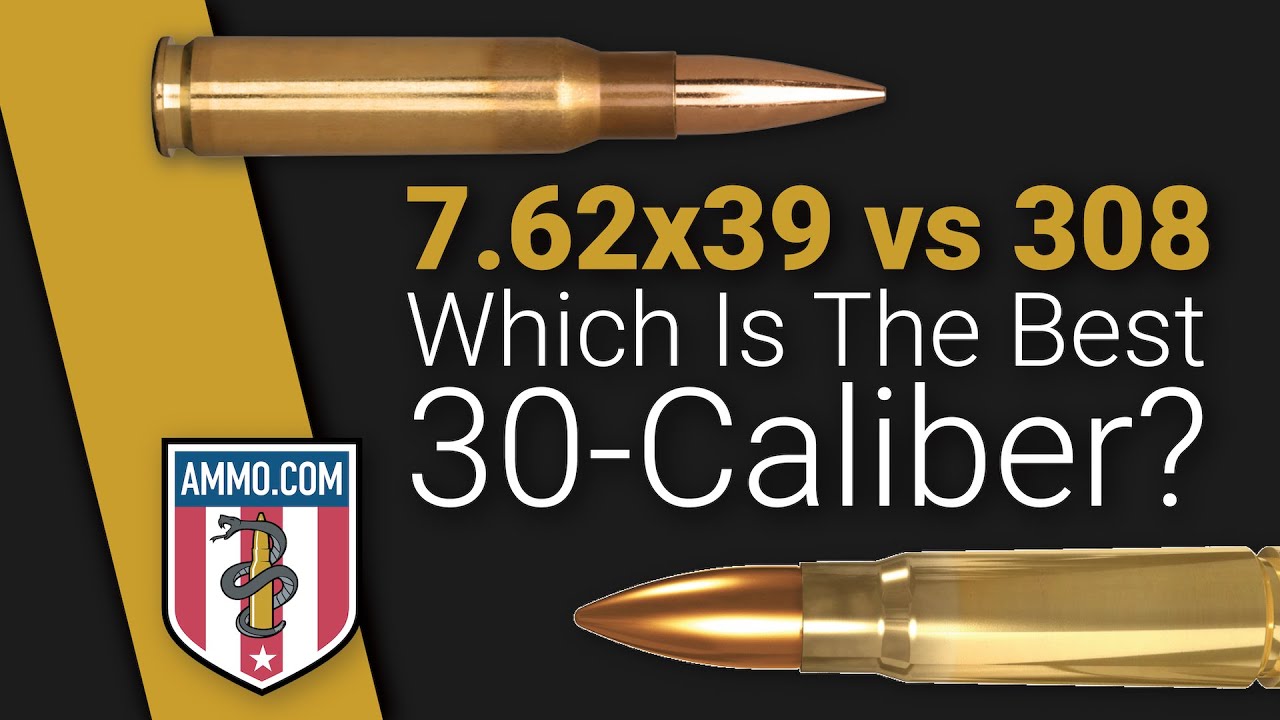 When it comes to the scholarly debate about the iconic rifle cartridges of the Cold War, the 7.62x51mm NATO (308 Winchester) and the 7.62x39 Soviet are always omnipresent in the discussion. One became a staple NATO round and the most prevalent big game hunting cartridge in North America, while the other became a symbol of pure, unadulterated ruggedness and dependability.

Both are excellent cartridges and will serve you faithfully, but which is the better choice will depend mostly on your intended purpose.

The 7.62x39 is a Russian designed cartridge that is most famously chambered in the AK-47. Having seen conflict on multiple continents, the 7.62x39 has cemented its legacy as one of the most innovative intermediate rifle cartridges of the 20th century. It is extremely popular today in the AK-47 and SKS platforms and has seen some integration into the AR-15 as well. Hunting with 7.62x39 has become more popular as well since the terminal ballistics of the round are similar to that of the 30-30.

The 308 Winchester is America’s 30-caliber cartridge. Developed after the Korean War, the 308 Win draws its lineage from the 30-06 Springfield that carried us through two World Wars and Korea. Although the 308 Winchester closely mimics the ballistics of the 30-06, it was quickly discovered that the 308 was too big for a frontline battle cartridge and was eventually replaced by the 223 Remington/5.56 NATO. However, the 308 still remains one of the quintessential long range cartridges and has won multiple shooting matches and is one of the most versatile hunting cartridges available on the market today.

The doctrine changed.
We went from a standing army to a fast attack army.
Thus everything got lighter and smaller.
The 308 is still used today in military ops. They had to bring it back because 5.56 was not doing the job.
Those that were soldiers knew the 308 was a better round all along.

308 is still used today in military ops. They had to bring it back because 5.56 was not doing the job.

Nah, it never left and is assigned to special roles. There is no one tool for every job.

There is no one tool for every job.

The 308 wasn’t the best of anything, except being so damn good at so many.

Hard to replace it, and they tried. We’ll see how the new kid does. If the 6.8 Western or the Sig Fury are indicators there will definitely be another .277 getting wet in Wyoming. You know, you just never know when a Walleye Lunker is going to capsize you…

It’s high time someone actually loses their gun in a boating accident for real anyway.

I never had one to lose.

The .308 (7.62x51) is a highly versatile round. Push come to shove…you can strip the rounds off of a medium machinegun belt and use them. Just separate the links in the belt.

It is still my ‘if I could only have one rifle’ cartridge, and likely will be for life.

As bullets get better, the 308 just gets better too.

Don’t know if you’ve heard of these yet. Interesting at least. 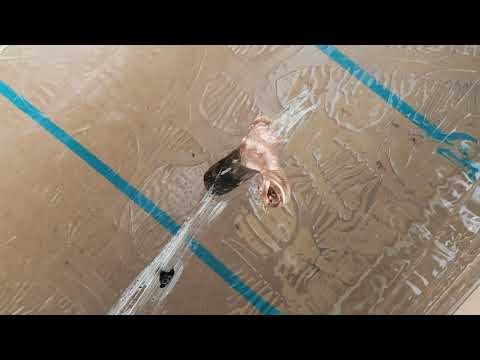 As bullets get better, the 308 just gets better too.

This is true. My son and I have talked about this many times. We both agree that the true advancement in hunting and combat arms isn’t some new magical, mystical cartridge. It’s in bullet design.

I remember how Barnes wasn’t allowed to sell their heavy solids anymore, normally used for heavy skin African animals because those solids would pass through any body armor.

My son and I did a test. He was fresh out of the marines and he talked about the ceramic plates they used. Effective against the 7.62x39.

So I got to thinking about some 168 grain TSX boat tails that I picked up for a steel some years back. Now these bullets do not have the soft ballistic tip. 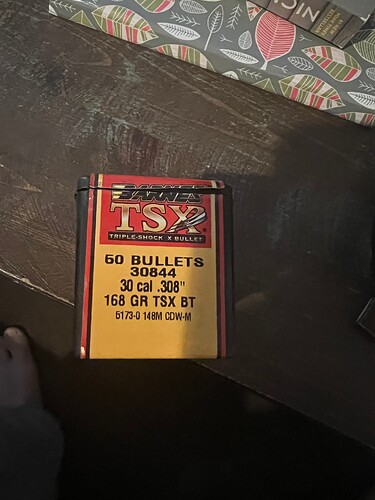 So I went to my gear and pulled out my back ballistic plate out of my carrier. It’s a level 3 AR plate. Can’t remember the manufacturer.

In the picture is one of the bullets with Molly on it. When I did the test, the bullet I used was not Molly coated. Just plain Jane copper. 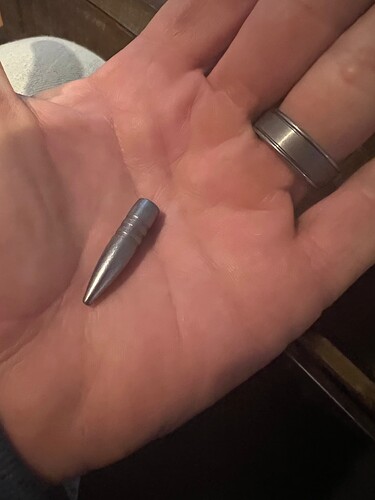 Now the eye opener. The tip on these bullets will most definitely open nicely on a soft target. But not a hard target.

The pass through was the Barnes 168 gr. Copper TSX bullet. Make your own conclusions about the effectiveness. 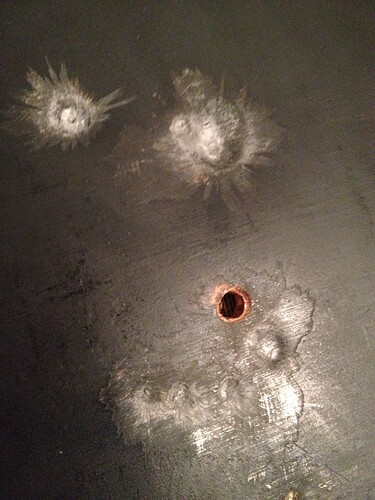 Very interesting. I am sure that at some distance they won’t do that, but clearly at social distance they would stop a AR plate wearing criminal. I wonder if the ceramic is better?

I wonder if the ceramic is better?

Just my thoughts on the military switching cartridges. The 6.8 has more mass, diameter surface and potential.
This would allow much more surface area, ballistically speaking, to do more with bullet design.
This is also significant in retrofitting millions of M4s and main battle rifles. Scraping mags is not as significant. The platform is here to stay.

So where can technology advance? There’s only one place. Bullet design.

I think it’s the one thing that they DONT talk about. Yeah bigger but in no way do I think it will penetrate that AR plate when my .308 won’t. There’s bullet design potentiality. That would allow it to penetrate a battle plate. That’s the real reason they are changing in my opinion.

If they could do it with the 5.56 there wouldn’t be a change. No need too. I remember when the 5.56 SOST bullet came out…

“ The cartridge was specially designed for the United States Marine Corps, under the name SOST (Special Operations Science and Technology) to provide penetration of objects with low structural strength and provide a considerable stopping power effect, even being able of piercing basic ballistic body protections.”

It obviously did not pan out. They still have the guideline of allowable bullets that international law still controls. In my opinion, there was not enough to a .22 caliber 5.56x45 to accomplish what they need to do. The enemy can take hits and still be in the fight.

The new DOD 6.8 Militarized Sig ‘Fury’ will do it beyond ‘social’ distances… 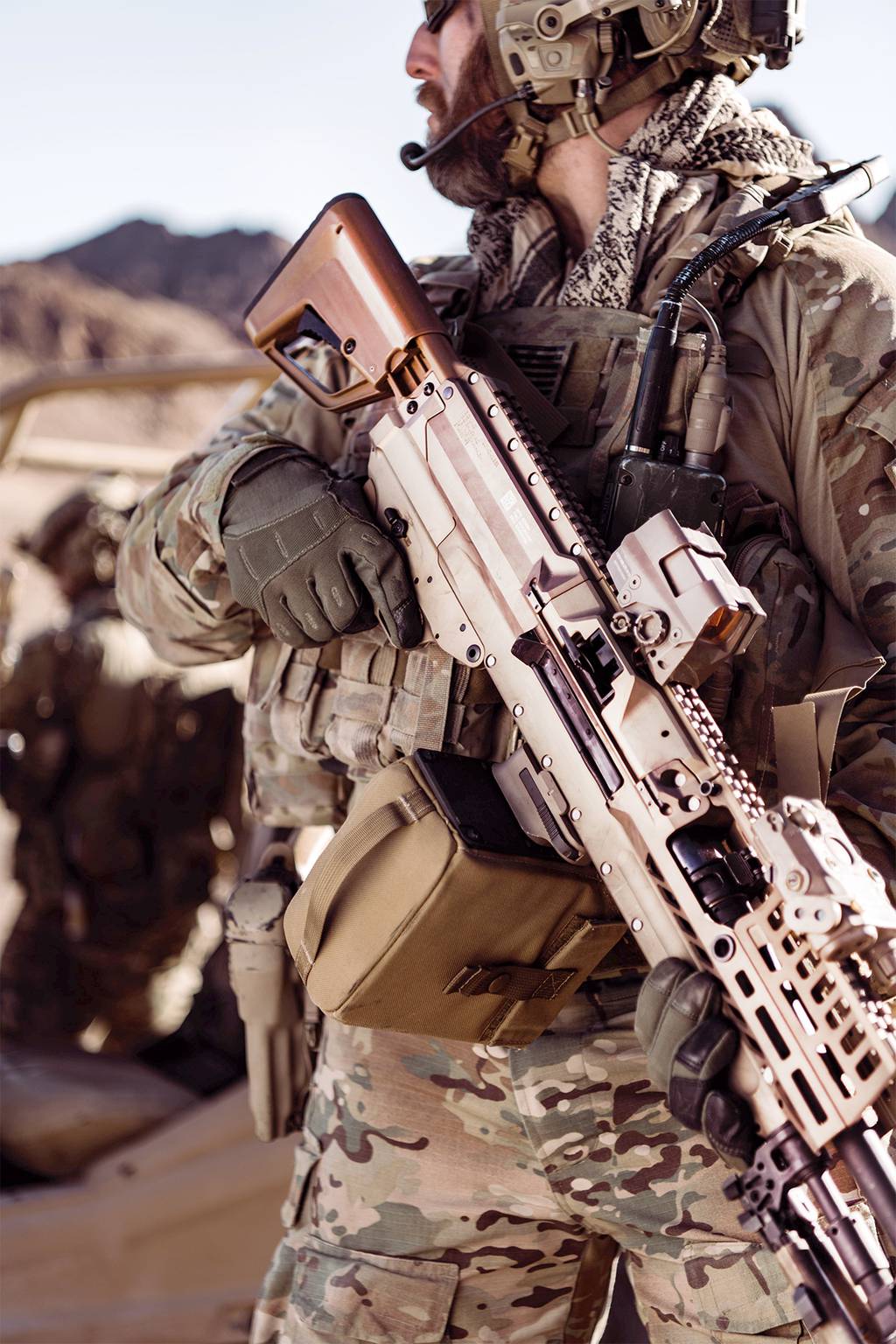 The weapons are going to infantry, scouts, combat engineers and special operations.

The new DOD 6.8 Militarized Sig ‘Fury’ will do it beyond ‘social’ distances…

Yeah I read it. I haven’t found a single article about the bullet. Obviously a steel or copper core. Something new. Tungsten would probably be too expensive. Don’t know.

Something to get past the physics of impact on a steel plate or laminated plate. I’m never sold on velocity being the impetus.

This will of course drive tech to better plates. Hahaha. The merry-go-round.

I want to shoot one of the new squad automatic weapons in 6.8. I haven’t seen a single video.

I did consider that. Wouldn’t that be the shyt. Expensive and very heavy. It’s possible. There would be advantages. Especially for long range snipers. Less wind drift. The heavy bullet would carry further. From anti-tanks rounds to small arms. Would go through body armor like butter.

I never shot either one, but i’ll have to say 308 is better