9mm vs 40 vs 45: The Great Handgun Caliber Debate Solved 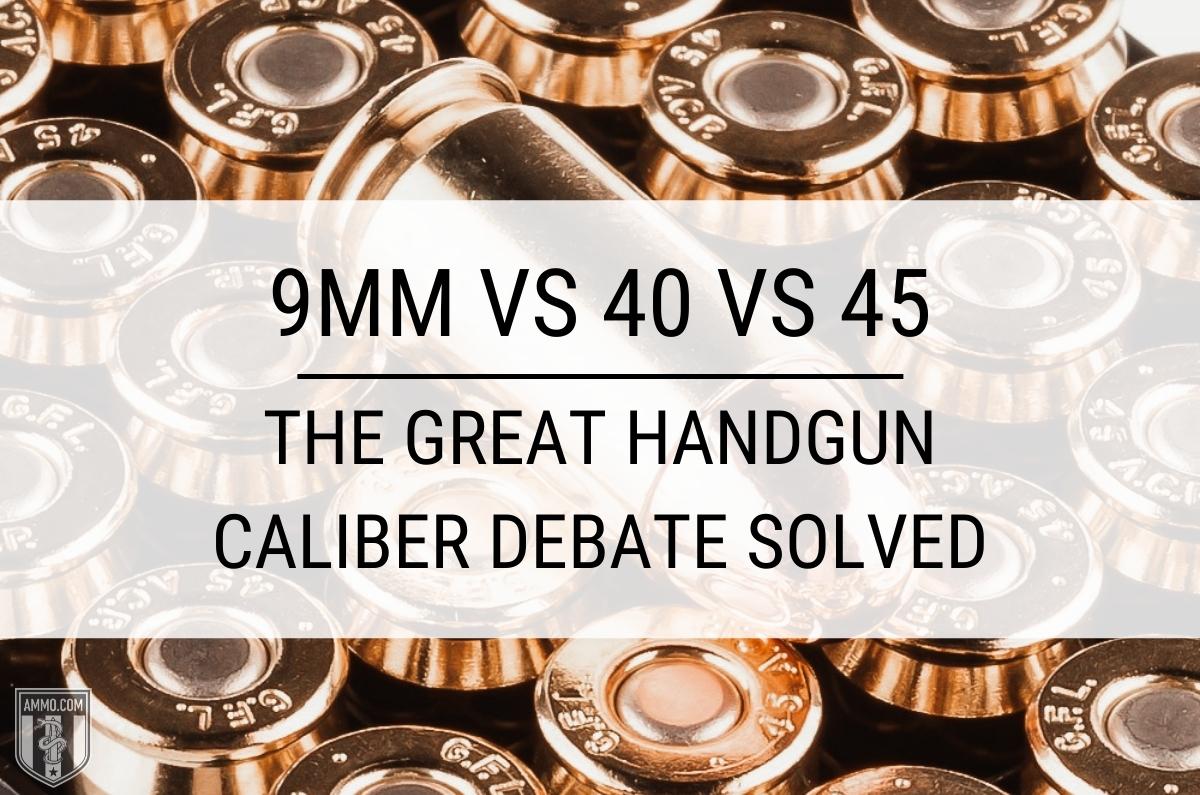 Deciding on the caliber of your self-defense or concealed carry handgun can be a challenging task if you haven’t done your research. Although there are many options on the market like 10mm Auto and 357 SIG, the three most popular pistol calibers are 9mm Luger, 40 S&W, and 45 ACP.

It’s not an insignificant choice, as anyone purchasing a handgun wants the best caliber for personal defense since this is what most pistols and revolvers are used for.

Sadly, there is a lot of misinformation about the effectiveness of handgun ammo that might sway a new gun owner into a caliber that they end up hating. This is where we come in!

Spoiler Alert: The ideal caliber is the one you shoot best. Therefore, when you are ready to drop your Benjamins on a new EDC handgun, whether it be a Glock 17, Springfield XD, Sig Sauer P226, or Colt 1911, you’ll be confident that you have the best self-defense sidearm on your hip.

When it comes to pistol calibers, the shooting community is extremely polarized when it comes to deciding which handgun cartridge is the best for personal defense.

The 40 Smith & Wesson (S&W) crowd is cut from a different cloth as they enjoy compromise and finding a handgun caliber that’s “just right”. As the true Goldilocks of the shooting world, they enjoy their porridge in one hand and are busy cleaning their beloved polymer-framed semi-auto Glock 22 or Springfield XD in the other. They enjoy shooting a heavier bullet weight (but not too heavy), higher muzzle velocity (but not too much FPS), and stopping power that is “just right”.

And finally, we have arrived at the 45 ACP crew. Before the introduction of the reliable semi-auto handgun and their coveted Colt 1911 or Glock 21, these shooters likely brought their 44 and 357 Magnum revolvers to a gunfight. They want to shoot the heaviest bullet weight possible, with punishing muzzle energy, and terminal ballistics that would make FBI handgun analysts cry tears of joy. Purveyors of the 45 ACP throw magazine capacity to the wind, because who needs to reload when you’ve got enough stopping power to put down a bad guy in one shot (or so they claim)?

This is clearly an oversimplified (and hilarious) example of how many shooters view the debate between 9mm Luger, 40 S&W, and 45 ACP. The truth is, it’s a give-and-take equation and each handgun cartridge has its unique advantages and disadvantages. It’s like a 3-way tug of war with the coveted title of “Top Self-Defense Round” at the center.

It can be confusing comparing multiple handgun calibers at the same time. Instead, let’s quickly look at each cartridge and how they compare in their respective pairs.

The comparison between 45 ACP and 40 S&W breaks down into three different criteria: recoil, muzzle velocity (fps), and to a lesser extent, magazine capacity. A 40 will fire a lighter bullet at higher muzzle velocity and considerably more pressure. This added pressure makes felt recoil from the 40 considerably snappier and more difficult to control.

On the other hand, the 45 ACP is a lower pressure round and shooters describe the recoil as a push and not a snap. The 45 fires heavier bullets at lower fps allowing for better control of the handgun and faster follow-up shots.

Magazine capacity for 45 ACP in a standard Glock 21 magazine is 13 rounds, while the Glock 22 magazine enjoys 15 rounds of 40 S&W. Two bullets are not a huge difference, but in a longer gunfight, it could make a difference.

9mm Luger vs 45 ACP is perhaps the quintessential handgun caliber debate that has been raging since World War II. This debate has only been exacerbated when the U.S. Army turned in their 45 ACP rounds and Colt 1911 sidearms for the Beretta M9 and 9mm Luger in the 1980s. The key points of contention in the 9 vs 45 debate are bullet weight, recoil, stopping power, and magazine capacity.

The 9mm cartridge produces less recoil as it fires a lighter bullet than the 45. However, a 9mm bullet will have significantly higher fps than a 45 which can lead to over-penetration when using FMJ ammo (which is why you should always use JHP ammo for self-defense when utilizing 9mm handguns). Recoil is lighter for the 9mm, allowing for faster follow-up shots.

However, the 45 ACP and its heavier bullet are long thought to have more stopping power as it creates a larger permanent wound channel. As the 9mm is smaller, it has a higher magazine capacity. A standard Glock 17 magazine can hold 17 rounds of 9mm ammunition while a Glock 21 magazine will only hold 13 rounds of 45.

To read our full review of 9mm Luger vs 45 ACP CLICK HERE.

The 9mm Luger vs 40 S&W debate has been raging since 1990 when the 40 first hit gun store shelves. The 40 S&W was produced by Smith & Wesson and Winchester as a direct result of the 1986 Miami Shootout. The 40 is a shorter, reduced power 10mm Auto that the FBI developed to replace their 9mm handguns and 38 Special revolvers due to inadequate stopping power of hollow-point ammo at that time. After adoption by the FBI, numerous police departments across the U.S. picked up the 40 as their duty ammo.

The main points of contention in the 9mm vs 40 debate are recoil and stopping power. The 9mm cartridge has about 25% less recoil than the 40 S&W, which allows for faster follow-up shots and better shot placement. The 40 S&W fires a larger bullet (124 gr vs 180 gr) that will theoretically create a larger permanent wound cavity and incapacitate a bad guy faster. However, hollow point technology has advanced since 1990 and JHP 9mm loads are considerably more effective, closing the gap between 9mm and 40 in terms of stopping power.

To read our full review of 9mm Luger vs 40 S&W CLICK HERE.

Stopping power, or knockdown power, is one of those mystical terms that shooters like to throw around to justify their position on one caliber or another. This is one of the main talking points in the 9mm vs 40 vs 45 ACP debate, so we will spend some time discussing it here.

However, you’ll note that there is no column on the ballistics charts for stopping power, and in truth, it is a combination of several factors. Although stopping power cannot be quantified, the FBI has done their best to do it.

In 1986, 8 FBI special agents were engaged in a prolonged gunfight with two bank robbers/murderers in Miami, Florida. During the conflict, two FBI agents lost their lives, and 5 others were injured. Referred to as the 1986 Miami Shootout, it is the most studied law enforcement engagement in US history.

It was determined that the FBI agents’ 9mm ammo was ineffective at quickly neutralizing the two criminals, as both endured multiple hits and kept fighting. This led to the FBI developing the 40 S&W as well as a scoring system for grading handgun ammo.

Known as the FBI Ammunition Testing Protocol, different bullets can be evaluated in ballistics gel to determine their real-world effectiveness inside the human body.

FMJ ammo should not be used in your EDC pistol as a full metal jacket will not expand and likely over-penetrate through the bad guy into an innocent bystander and/or through internal walls.

The FBI standard for personal defense ammo states that a hollow point bullet should penetrate 12-18” into ballistic gel to be considered effective. Anything below 12” will likely not penetrate deep enough to damage major organs and over 18” would be considered over penetration and pass through the bad guy.

With modern hollow point bullets, self-defense JHP ammo like Speer Gold Dot, Federal HST, and Winchester PDX1 all meet this standard regardless of caliber. So, if that is the case, what is the difference between the 9mm, 40, and 45?

Many an internet tactical ninja will point to the differences in kinetic energy and bullet diameter between calibers and state that these make the difference. Sadly, for the armchair ballisticians, these differences are not grand enough to cause any significant terminal performance variations between 9, 40, and 45.

What then is the answer? What is the cause for some gunfights to end in one shot while others take multiple rounds? Shot placement.

The fastest and most effective way to end a gunfight is directly tied to a shooter’s ability to accurately put rounds on center mass or the fatal T. Think of it this way, is a shot to the heart any more or less lethal with a 9mm compared to a 45 ACP? Furthermore, would a 40 S&W to the hand be more or less lethal than a 9mm to the bridge of the nose?

Without question, shot placement is the key to increasing your odds of survival during any self-defense situation. Therefore, the handgun cartridge with the most stopping power is one that YOU can shoot most accurately and meets the FBI’s requirements for self-defense ammo.

“When seconds count, law enforcement is only minutes away.”

The national law enforcement response time is around 8 minutes. A LOT of bad things can happen in those 8 minutes before a law enforcement officer (LEO) shows up at your door! As such, one of the top reasons that handguns are purchased is for home defense.

And when it comes to home defense, my choice is the 45 ACP because I want a heavier bullet that can more likely stop an attacker or would-be home invader faster, with as few shots as possible. The Winchester Ranger-T or Speer Gold Dot JHP would be my choice of ammo for this role.

Furthermore, the 45 ACP has slightly less propensity to over-penetrate, which is a major liability issue when you live in a populated area or are a stone’s throw away from your neighbors.

When it comes to home defense handgun selection, weight is less important and I would recommend a full-size semi-auto pistol as the added weight will reduce felt recoil. A Sig Sauer P220, Ruger SR1911, or Glock 21 would fill this role perfectly.

When selecting a caliber for concealed carry, recoil, pistol weight, and magazine capacity all play a critical role. And for this reason, the 9mm round is the best choice for your EDC.

Why you are carrying concealed, pistol weight is going to become something you will be acutely aware of in short order. Larger and heavier full-sized firearms are uncomfortable to carry and require concessions in your wardrobe and carry system. On the other hand, polymer-framed sub-compact pistols are much more comfortable to concealed carry every day with minimal effort or changes to your clothing options.

However, when you reduce your overall firearm weight, you increase the amount of felt recoil you experience. That 45 ACP that was so comfortable to shoot in a 5” Government 1911 becomes a lot more difficult to control in a Glock 36. And that 40 S&W that was only slightly offensive in a Glock 22 becomes downright painful to shoot in a Glock 27.

As the 9mm round will have less recoil than 40 or 45, sub-compact 9mm handguns are:

Lastly, as the 9mm bullet is smaller, it allows for more cartridges to fit into the magazine. This puts the 9mm as the better choice for concealed carry as you will have to fight less recoil and focus on the fundamentals of shooting, which in turn will allow for enhanced accuracy. As shot placement is the key to ending a gunfight, it makes sense that you select the cartridge that has the least amount of recoil and the 9mm round fits that role perfectly.

But 9mms are vagina rounds. .45 acp is thee commie killing round.

All kidding aside a person should carry all three, first you shoot them with 9mm transition to the .40 then finish with a mag dump of .45, Duel wield if possible.

If the 9mm SMG cannot shred them, pullout the 40, punch through the soft armor, then just club them to death with the jammed 1911 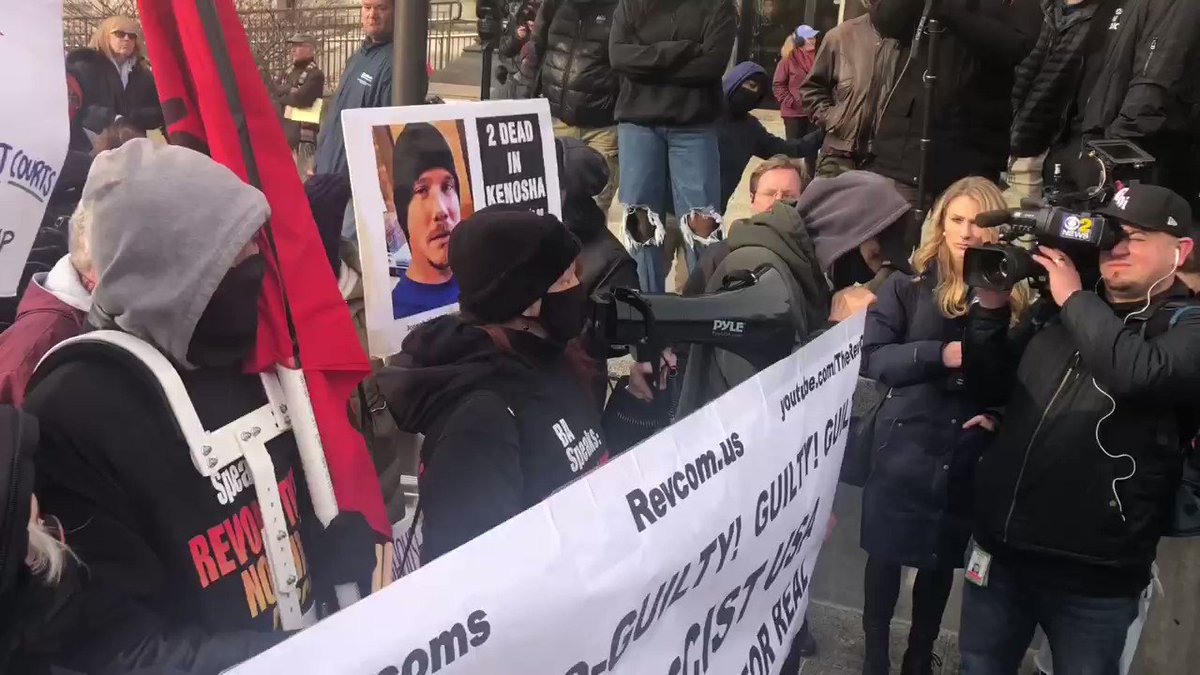 @FordFischer
Activists with the Revolutionary Communists @therevcoms call on people outside the #Kenosha courthouse to join their cause for an “actual revolution following the #Rittenhouse verdict. https://t.co/fIG1pk46hx”

Like is says on my steel pot: Kill a commie for your Mommie