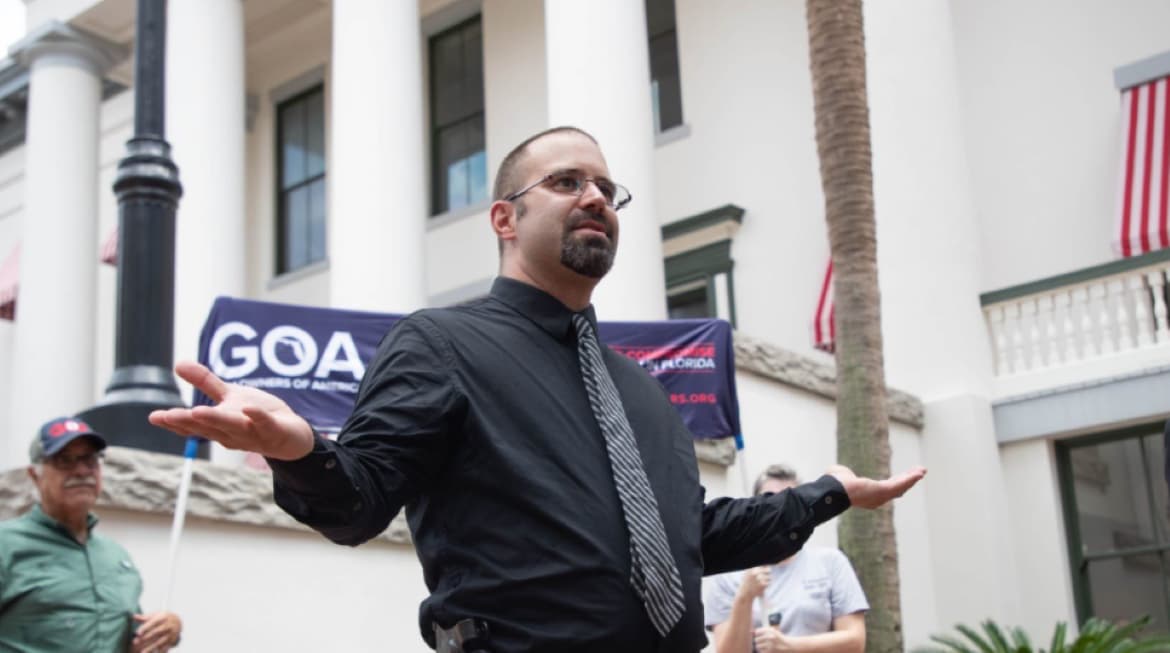 Luis Valdes, the Florida state director for Gun Owners of America, should have taken a few more civics classes – something the GOA leadership is learning for themselves, the hard way.

Valdes didn’t understand that the problem is much bigger than any one politician. He still doesn’t get that. Neither does GOA. The fact that Florida’s gun rights have been surpassed by every other Republican-majority state is the fault of the Republican Party of Florida. The Republican leadership is to blame, not any one Republican lawmaker – especially Byrd.

We pointed this out when we called Valdes out, and I wrote this: “The Florida legislature has a pest-control problem – it’s infested with RINOs.”

Valdes should write that down so he doesn’t forget.

missed another vital point. Their man, they said, was “attacked,” rather than the attacker. They’d rather portray Valdes as the victim, not the instigator. To be clear, Valdes called out Byrd because he didn’t know any better, and because trolling politicians for the delight of his 175 Facebook followers is the only tool he has left. Valdes was persona non grata at the state capitol before. No one would talk to him. Now, after he maligned an extremely pro-gun lawmaker, he’s become a pariah.

Keep in mind Valdes is GOA’s registered Florida lobbyist, and it’s his job to persuade politicians to support pro-gun bills, but none of them will talk to him. The only option he has left is the aforementioned snarky Facebook trolling. This isn’t good for gun rights, and it certainly doesn’t do anything substantive for the GOA members he represents.

GOA describes itself as the only “no compromise” gun lobby. Valdes claims he has never compromised since he became GOA’s Florida state director. The truth is he’s never done anything, so he’s never been in a position where compromise was an option.

Valdes has only fronted GOA during one legislative session. He’s a political neophyte who has never got a lawmaker to sponsor a bill, and he’s never filed a single gun-rights lawsuit, much less won any legal victories. Not only does he not know how the legislative process works, Valdes doesn’t even know when a bill becomes a bill.

“This is the third time that Rep. Sabatini has introduced a constitutional carry bill in the legislature. Thus far, he’s the only Florida lawmaker to do so. No other legislator has done so, even though the state has a Republican governor and Republican supermajorities in Tallahassee,” ◀Previous Post Next Post▶ Gun Owners of America and Florida State Representative Anthony Sabatini held a press conference on August 23rd at the Florida state capitol to bring constitutional carry to the forefront. Why? Because the Republican party in...

last week. “These politicians should be tripping over each other trying to expand firearms freedom, yet all we see is one lone lawmaker currently trying to advance liberty.”

There’s a problem with Valdes’ story. Sabatini hasn’t introduced a constitutional carry bill for the 2022 session.

As of Saturday night, Sabatini has only filed two bills for the upcoming session: campus carry and another that would wipe out the losses we sustained from the “Parkland Bill.” Both are good bills. Both will definitely receive our support, but neither is constitutional carry.

Anyone who has ever worked at the capitol knows that politicians love to talk about what they’re “fixing on filing,” but a bill isn’t a bill until it’s actually filed. Any pro-gun state director should know this.

Valdes has nibbled around the periphery of the gun-rights movement for years. I was first made aware of him in 2017 when he ran for NRA board. He told folks he wanted to “replace Marion Hammer,” as a board member. I remember laughing at this, since candidates for the NRA board aren’t assigned geographic districts. The candidates who get the most votes get elected. Valdes should have known this too. His candidacy fizzled, and he ended up withdrawing his name from consideration and never made it onto any NRA ballot.

About the only thing I can find that Valdes has done as GOA’s Florida state director was organize a rally for constitutional carry, which was held last month on the capitol steps.

“Gun Owners of America is having a rally for Constitutional Carry. Enough is enough!” he wrote on Facebook.

I should qualify this: Valdes (called it a rally)
https://www.facebook.com/events/1503229540022567/
, but when only 84 people responded to Valdes’ Facebook post,
https://www.facebook.com/events/1503229540022567/
the event was quickly retitled and became a “press conference.” The press conference drew around 50 people, which Valdes hailed as a “great success.” Any experienced Second Amendment advocate would have hung their head in shame.

Friends have told us that when Florida Carry called out Valdes for going after Byrd, we put GOA leadership in a quandary. They clearly knew their guy screwed up by calling out a true champion of the Second Amendment, but they had to be seen to support their guy – Valdes. I get that. I’d have probably done the same thing, but only after I verified the guy was right. Valdes clearly wasn’t.

Florida Carry was very clear about where the real blame belongs, and we pointed out Valdes owes Byrd an apology. He still does.

To his credit, Valdes is young and full of energy. The movement needs that, but right now he is an unguided missile. He clearly needs more guidance from GOA leadership, since all he can do is schedule embarrassing non-rallies and write snarky posts for his handful of Facebook followers.

GOA leadership knows this too, yet they attacked the messenger because they couldn’t handle the message. That’s fine. This isn’t the first time I’ve been attacked, and it certainly won’t be the last.

I think you’re likely to hear a lot of barking coming from Valdes in the near future, unless he changes his ways.

Lee Williams is a board member of Florida Carry, Inc.