That’s the number of truly homicidal people in the United States. Keep that number in mind as you read this.

First, the gun-grabbing politicians are lying to you and me. That’s not new. Let’s consider what they might say, if only…

If a gun-Grabber were given truth serum for a day, here’s what he might say:

“We want your guns. We want them because we aren’t willing to address problems for what they really are and we’re more interested in political expediency. You see, we’ve decided that truly homicidal people represent such an imminent danger to you that we resolve to take away their guns. And to do that, we have to take away your guns too. So, this fella, who we’ve decided is a clear and present danger to everyone, shouldn’t be behind bars; he shouldn’t be institutionalized; and he shouldn’t get treatment until he is safe in society. Instead, our solution is to take away the guns we know about in the hope that it keeps this crackpot from shooting someone, even though we know that 19,999 out of 20,000 of you don’t shoot anyone with with your guns and that you never will. But, again, this is about political expediency. It’s too expensive to incarcerate him; it’s too expensive to institutionalize him; and it’s too expensive to treat him. Doing those things doesn’t get us more votes. And that’s what we’re really after anyway. And we know that you all believe in these nasty, outdated oddities called Rights. We’re here to tell you that we don’t care that you deeply believe Rights are inherent and inalienable. We’re here to tell you that we don’t care that firearms provide the great equalizer for that 90 pound woman to defend herself against her 250 pound attacker. We’re here to tell you that we, as politicians, are scared to death of you, an armed populace, because we know that you are the most efficient check against our abuses of power. And that’s why we want your guns…”

But we’ll never hear those words.

All that we have at our disposal is the numbers themselves. And what the numbers tell us is that there are roughly 17,000 homicides of ALL types in the United States each year. At first, that number seems frightening…until you readjust your focus and remember there are 330,000,000 people who live in this country. This means that 0.005% of the people in this country walking around among us are truly homicidal. Yet, our government is willing to deny the Rights of the other 99.995% of the population.

Shall NOT be infringed!

All gun laws are infringements…

I have no cable, no antenna, and am happy to miss out on these things

its now bleeding over and infecting my firestick (screenshot) 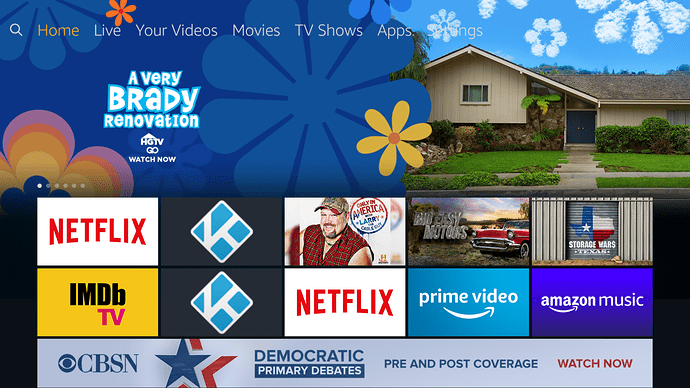 I started watching the debate at 8:00 and it reeks of political correctness already. Both moderators and candidates are spewing the usual leftist rhetoric…and it’s only 8:07.

I started watching the debate at 8:00 and it reeks of political correctness already.

Unsurprising. These debates have devolved over the years into hate-fests for all things individual and Americana. We’re strangers in our own country anymore.

Love the spirit of your post and I agree with its message, however, the numbers are a bit off for homicides. First though you need to separate homicides and murders. Because even a legal use of lethal force is still a homicide. Murder is the unlawful lethal force resulting in a homicide.

So the number of murders ranges from the 12k range to the 15k range for the last 5 years. The numbers for 2018 on the FBI crime statistics page are either incomplete or I couldn’t find them. So, gotta use the 2017 numbers. Also, the number of “homicides” is actually going to be higher than the murder total. So I recommend you use the murder total for your numbers, it’ll be an even more accurate and telling data point since the number is less than the 17k you used.

Love the spirit of your post and I agree with its message, however, the numbers are a bit off for homicides.

Thanks for the response!

I intentionally went high. I know in my heart the numbers are lower. I wanted to use the distorted numbers that Grabbers throw out there to demonstrate that even with their inflated numbers, the “risks” they’re screaming about simply aren’t there.

I hope you can appreciate why I chose to use the numbers that are touted by the Grabbers. Defeating their specific argument was my intent.

I hope you can appreciate why I chose to use the numbers that are touted by the Grabbers. Defeating their specific argument was my intent.

Fixed that for you.

He was the kind of making law with a pen.

He didn’t executive order any gun control though.

No but he opened the door so much he took them off the hinges showing all subsequent POTUSes that they can do the same for anything they want.

Oh I stand corrected he did. But they weren’t executive orders for bans.

You’re both right. We’ve watched a handful of Presidents use the unchecked executive order with rare resistance. It’s expanded the view of the POTUS to the role of elected King for many of our fellow countrymen who are quite content to live as subjects. It’s going to take a strong Congress to push back against the rampant use of executive orders. I don’t see a strong Congress coming anytime soon…

now bleeding over and infecting my firestick (screenshot)

Which one are you rooting for?

now bleeding over and infecting my firestick (screenshot)

Which one are you rooting for?

I’d have to first choose how to induce 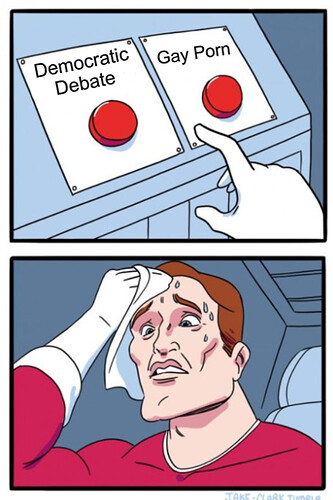 as of now I have no idea who’s even debating

I’d have to first choose how to induce