a wrong argument but one that does open your eyes As American citizens call for disarming the public, they conveniently ignore the most deadly group of people who will be the only ones with guns—the government.

Not anti LE here, I’ve got many friends who are LE. But the article is a good, thought provoking read. Thanks.

the point is you can use any number or fact that counters an argument. Say out there someone was tracking fuel used in cars and discovered that say one in five (20%) cars involved in a fatal accident used Texaco brand fuel. They could in essence claim that the fuel was the over all cause of fatal accidents (which would be true because with out the fuel the accident could not have happened) but not reason for the fatal accident.
The group that is presenting the facts are anti-police but what is funny is there are also anti-gun.

The thing is, that it doesn’t take much of a push to imagine what those numbers would look like with a corrupt police force working hand in hand with a totalitarian regime against an unarmed populace. A number of particular countries throughout history come to mind…
Food for thought.

Most all shot BY PD deserved killing.
To believe otherwise makes one a dnc sukbag of BS.
I watched this over and over in Newark NJ
No hope for dopes. 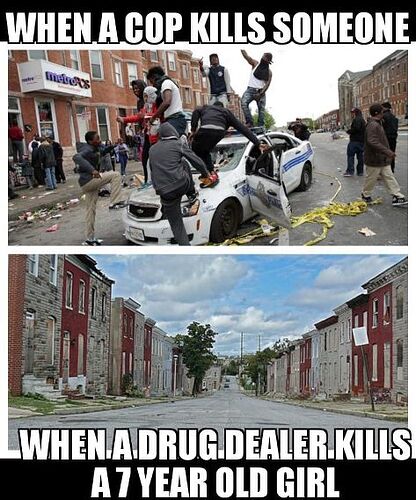 but you missed the point of the argument, you ask a gungrabber if they believe in police protection or their right to self protection. Than you throw the simple fact out that the police have killed more than the mass shooters. This has nothing to being anti-police but how to manipulate numbers like the gungrabbers

I don’t care how many people the police have killed. Not relevant. It is essentially part of their job as violent criminals sometimes force police into situations requiring lethal responses.

What I do care about is how many people the police killed that they should not have. Does anyone have that number?

I read about Chicago over a weekend with 35 shootings and nearly 14 or 15 dead, not specific whether Police were involved or not involved in the shootings. Amazing for a weekend

Does anyone have that number?

by who’s definition - for me quite a lot of the officer involved shootings were unwarranted but were deemed justifiable
But the point isn’t the police but a number versus a number.
just as the MSM narrative is scarey black rifles kills everyone in a mass shooting, it is the assault rifle that is killing children or massacring the innocent in schools.
You fight with knowledge.

I totally get your point, and it’s obviously very valid.
To see how blown out of proportions these issues are, consider the following:

From NHTSA:
Every day, almost 30 people in the United States die in drunk-driving crashes—that’s one person every 48 minutes in 2017. These deaths have fallen by a third in the last three decades; however, drunk-driving crashes claim more than 10,000 lives per year. In 2010, the most recent year for which cost data is available, these deaths and damages contributed to a cost of $44 billion that year.

30 people each day. 900 per month. Over 10000 per year.
And 44 BILLION dollars in damages? That’s more than the GDP of some small countries!
Should we be banning alcohol? Cars? Arms? Legs? Gasoline? Tires?
This, is a national tragedy. Why is no one screaming about it? Why is the left not trying to make more laws preventing the use of alcohol, or cars?
There are more alcohol related fatalities in one month than the 816 people killed in mass shootings (SINCE 1982!) as mentioned above. This is a national crisis…alcohol fueled deaths, automotive violence.
If the left cares so much about the loss of human lives, why is this not page one on the agenda.
Where is the MSM? Why aren’t we seeing the carnage? The perpetrators?

The fact is folks, it’s all about an agenda. Disarming the American population.

Food for thought… has the number of LE shooting increased or has the number of reported incidents increased due to the increased access to media…4 decades ago the only way we found out something happened was through news or word of mouth, now everyone and their mother has access to post information/ news on the web

The one mantra I remember from my Statistics and 6 Sigma days is “Correlation != Causation”. Unfortunately, most of the population doesn’t get that and so random data can be used to manipulate the public perception. I wish basic statistics were a required subject in high school.

Sadly in our nation police officers are more inclined to shoot you than try to save you as a whole.
Not all of them, but enough of them that the problem is becoming serious.
Some of them are my fellow veterans who could not find occupation elsewhere and have no business being in law enforcement.

I used to fully support the boys in blue, now I just don’t get involved with them at all. I no longer trust them and I no longer use them for support.