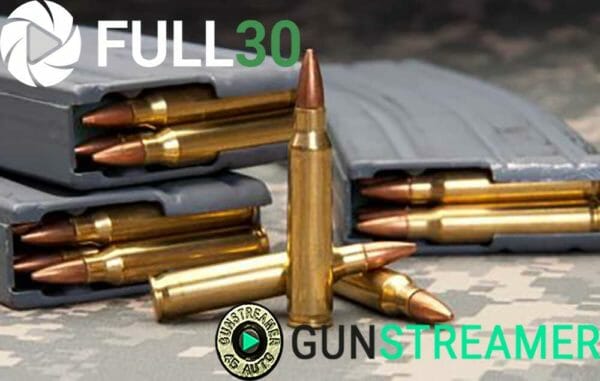 U.S.A. –-(Ammoland.com)- When FPSRussia debuted on YouTube, no one could have imagined that the channel’s creator Kyle Myers would be able to make a living on the video sharing platform, but he became wealthy by playing the character of Dmitri Potapoff for adoring fans.

The YouTube creator’s success led to others being able to follow their dream and share their passion for guns and the Second Amendment on the Google video sharing platform. This success was until what became known as the YouTube “Ad-pocalypse” happened on the website.

In March of 2017 advertisements played on certain racist and extremist content. Watchdog groups notified the mainstream media and newspapers such as the Wallstreet Journal jumped on the story and started contacting advertisers to get comments. In this age of PC, brands didn’t want the public to think they were endorsing these views, so they started pulling their ad money from the Google-owned subsidiary.

Seeing their value plummet, YouTube decided they needed to act to head off the mass exoduses of advertisers. They rewrote their policy, and most advertisements were only running on what they considered family friendly content.

Google, being a far-left company, does not believe gun channels were family friendly.

Firearms channels saw a massive decrease in ad revenue. Not only did they see their ad revenue decreased, the chances of YouTube recommending their content plummeted. Without being recommended by the algorithm, it is hard to be discovered by new viewers and sponsors. This change was the original shadowban.

Jason Abston of Boomstick Tactical ran into problems with YouTube and had strikes placed on his channel and had his other videos demonetized for arbitrary reasons.

“I’m a state certified firearms instructor and make videos on gun safety as well as training videos,” Abston told me. “YouTube has deleted one of my videos, demonized them and block my channel from search results. One video I made was me standing in front of the camera talking about the history behind the Second Amendment. YouTube said it violated their community standards.”

YouTube removed some channels without warning for violating rules that the website didn’t even list at the time they banned the channels. These bans left channels with little recourse to get there channels back. These bans are not just limited to gun channels. The popular comedy channel Mumkey Jones was removed for making fun of a mass shooter. He came to fame by making a video that made fun on Hillary Clinton.

In that situation, Mumkey Jones received all three strikes at the same time. YouTube considered making fun of a mass shooter as “extremist content.” This was the full-time job for Mumkey Jones, so he lost his whole income. YouTube even terminated his girlfriend’s channel to make sure.

Gun channels were hit hard with these mass channel banning. This situation is what happened to Brian Purkiss of LockedBack.com. He was banned for violating a secret rule and Google left him with no recourse.

When you depend on a single site for your income, then you put your lively hood in the hands of people that can decide to kick you off the platform at a whim without even receiving any notice. There was a need for people to diversify their revenue streams.

Bill Frady of “Lock n Load Radio” understands the need to have multiple streams. He diversifies where his content is hosted. This multiple host system not only gives him the peace of mind of knowing his content cannot be deleted at a whim of an anti-gun employee but also give his advertisers more visibility.

“Content creators have to have multiple streams,” Frady told me. “You shouldn’t just have one stream because anything can happen. You don’t want your content gone overnight.”

Out of despair comes a great opportunity, and a few people decided to turn the great YouTube purge of 2017 into an opportunity. They tackled this problem by creating video hosting sites that are firearms based. The two most prominent firearms video sharing sites is Full30 and Gunstreamer. 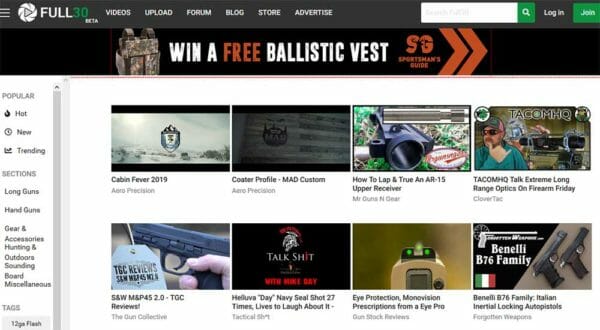 Full30 was created by Mark Hammonds when YouTube started demonetizing videos. Some of the biggest gun channels mirrored their content to Full30. Full30 call these content creators “Producers.”

The current crop of content creators on Full30 is exclusive. Regular users can sign up and reserve their channel but can’t upload any videos yet. There is no word when the site will open video hosting to the general public.

The first method YouTube uses is Cost-per-click (CPC) where advertisers will pay every time a viewer clicks on an ad. If an ad is viewed, but not clicked, the advertiser pays nothing. Full30 decided not to offer this model.

The second method is the model is the one that Full30 has decided to embrace. This method is Cost per impressions (CPM). In this setup, Advertisers pays after a number of times that viewers watch their AD. The standard is per 1000 views, but I have seen it as high as 5000.

Full30 shares the revenue they make from their advertisers with their monetized producers. Not all producers choose to monetize their channels. Certain producers use Full30 just as a place to put videos where they are safe from the whims of the giants of Silicon Valley.

Full30 isn’t just a video hosting site. One of the best-kept secrets about the site is their forums. The forum on Full30 is a place where people from all over the gun world can come together. The forums are full of creators, writers, manufacturers, and just average gun guys.

These forums are a little different than other gun forums sites on the Net that concentrates on a single specific topic. The Full30 forums are trying to be like a United Nations of the gun world where members of all these groups can come together and share ideas.

Unlike the videos hosting portion site, anyone can sign up and post on the forums. I found myself using the forums more than the video portion of Full30. I was able to connect with people from all over the gun world which helps me with my work as a firearms journalist.

GunStreamer is the second site dedicated to filling the gap for high-quality gun videos now that YouTube has even started to ban DIY gun videos such as AR-15 Builds and video about things such as bump stocks. My small YouTube page had about 20 out of the 60 videos removed because they were how-to videos.

Because of the direction, YouTube was going Austin Roberts decided to start GunStreamer. His idea was simple. Make a platform that gives the creators control without having them worry about violating the terms of services. The site is not into censorship. The only things explicitly banned is nudity and illegal activity.

“We like to transparent as a company in general,” Roberts told me. “We are drawing lines on just a couple particular things that we think is absolutely necessary, but we want it to be clear that our policy will not be used to encroach of free speech. Our platform is open for all. We, as owners, will be not be discriminating against our content creators or our user base on their personal views, and we will not be using our terms of service as a weapon against free speech.”

Unlike Full30, anyone can sign up for GunStreamer. If a user already has a YouTube channel, GunStreamer has a built-in import feature that can import a single video or an entire channel. I was able to import my channel by just copy and pasting the URL and clicking a button.

The system works well. Every time I post a video on YouTube, it is automatically posted to GunStreamer as well. This video import system makes using GunStreamer a little easier than other video sites.

GunStreamer also uses primarily a CPM design for revenue sharing but can also a comandante advertiser request for a CPC model. In addition to the revenue sharing model, the company also launched ContributUS which is a Patreon alternative for the gun world. 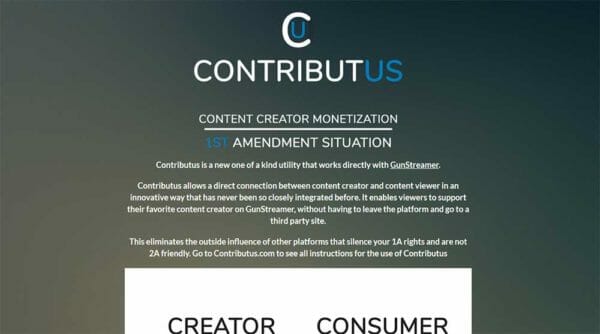 Patreon is a platform where users can “subscribe” to their favorite creators. The issue with Patreon is that they have banned people for arbitrary reasons without warning. This random banning can take away a creator living in a blink of an eye.

Patreon has recently been in the news due to the banning of Sargon of Akkad. The famous YouTuber was kicked off Patreon for a comment made on a Podcast that wasn’t even his own. The controversial comment was him using the “N”-word when talking about Neo-Nazis. He said that Neo-Nazis like using that word, but they are the real ones.

Patreon has long stated that it would not take any action against users for things that take place off the crowdfunding platform itself. The Sargon incident didn’t take place on Patreon or even on any of his own media streams. It also happened six months before Patreon banned him for the comment.

According to Patreon, the context of the clip didn’t matter. Sargon used one of their secret banned words. Also, Patreon doesn’t have clear guidelines on what is allowed and what is banned. They have a small team to decide on what is banned and for who. They also decide the punishment. Patreon claims this lets them judge everything incident and creator on a case by case basis.

The issue with this is that a line in the sand for one person is not the same line for another person. Also, without a warning system, a person doesn’t know when they crossed that line which leaves people guessing at what is allowed or prohibited.

Much like GunStreamer, ContributUS has a clear policy of what is and isn’t allowed. Another cool thing is that ContributUS is built directly into the video-sharing site. This something, not even Patreon offers their customers.

The Video creator can make subscription levels and lock down videos to those levels. This ability gives the content creator a greater range of monetization options compared to even YouTube.

Will either of these sites be able to siphon off users from YouTube? The answer is most likely not, but they might not have to. With YouTube moving more and more to the anti-gun left, people seeking content from their favorite gun video creator might not be able to find it on Google’s video platform. When that eventually happens, these sites will be there.

John is a NRA instructor and a constitutional activist. He is the former CEO of Veritas Firearms, LLC and is the co-host of The Patriot News Podcast which can be found at www.blogtalkradio.com/patriotnews. John has written extensively on the patriot movement including 3%'ers, Oath Keepers, and Militias. In addition to the Patriot movement, John has written about firearms, interviewed people of all walks of life, and on the Constitution. John lives in Northern Virginia with his wife and sons and is currently working on a book on leftist deplatforming methods and can be followed on Twitter at @crumpyss, on Facebook at realjohncrump, or at www.crumpy.com.

This board is growing every day and for the better.
Welcome to your new home.
And TR here is a pat on the back to make you feel better.

And TR here is a pat on the back to make you feel better.

YouTube really is going down the crapper - but it’s still on top because there are no alternatives.

It’s really frustrating how we have no viable competition.

The bigger they are, the harder they fall.

YouTube really is going down the crapper - but it’s still on top because there are no alternatives.

It’s really frustrating how we have no viable competition

Sorry you did not get a mention, but you sure are popular with us, and our numbers are growing!

I second the motion to give you a pat on the back. Please keep plugging away. You are making our world a better place to live!