An Open Letter: Discipline Cannot be Practiced under Restrictions

How effective are background checks? Does a background check on an individual truly determine whether said individual is fit to own a gun? Which is a better metric for determining who qualifies to own a gun? Discipline or some record of the past? Discipline requires the fulfillment of a standard on a day by day basis. I have an undying passion in my heart for exercise science and physical training. And the one thing I know about these practices is this, past records do not matter. If, for example, I did 100 pushups yesterday, it means yesterday I succeeded. But what about today and/or tomorrow? Get it? You want the massacres to stop? A background check does not give one the courage to face an attacker, discipline does. The every day practice of appropriate behaviour. Just as faith comes by hearing over and over again according to the word of God, discipline comes by training on a daily basis. Discipline requires everyday practice. Discipline requires that you learn and practice what you learn everyday. Mr. President your so called assault weapons ban is a hindrance and a limitation to the practice of discipline. It prevents law abiding Americans from learning to stand against the face of evil and return fire. Chicago has the strongest gun control laws in America, yet at one point during the Obama administration, more Americans died in Chicago than in Iraq. Remind me sir, how on earth did you win the election? On your past record? Let us examine that for a minute, among Christian Conservatives you were unfaithful; you have been married and divorced, and married and divorced and married again. Among blacks and other minorities you were a racist most vile!! And among some models you were a lecherous pervert! According to the media you were a cruel business man who preyed on the weak. Man oh man how did you win? And how exactly did you build the empire you have built over the years? A record of the past? I don’t think so. The day in day out constant practice of discipline. A good record without discipline nullifies the good record. Let the record show that guns do not have a good record. But the same record will also reflect that the bad record on guns is a result on the undisciplined and unruly nature of men. For all men have sinned and come/fallen short of the glory of God. A gun is a tool just as a pen. A pen will speak the language of the writer, a knife will cleave, cut, carve and slice as commanded by he who wields it. Mark my words carefully Mr. President I am not asking for the complete exclusion of background checks, but if discipline is not included as a necessary due process for owning a gun, then you are definitely chasing the wind.
Victor.

I agree disipline should be part of the equation
But are you sugjesting giving gun rights to crazy and violent criminal type people!?

Not at all. I am suggesting that background checks are not enough. I believe that the practice of discipline is a more efficient tool in determining who is fit to own a gun. Remember the last paragraph of my letter. Background checks should not be excluded. The practice of discipline must be included as a necessary due process. And perhaps we are both forgetting something, discipline requires accountability to peers.

Hi @victork2,
I understand where your coming from here. I agree on one hand that background checks on some level are ok to weed out the truly bad guys. Those who’s violent behavior suggests they can’t be trusted to handle a firearm in a civil fashion. However you say:

The practice of discipline must be included as a necessary due process. And perhaps we are both forgetting something, discipline requires accountability to peers.

Are you suggesting discipline is a requirement for gun ownership? And if so what does “accountability to peers” mean? Who sits in judgment of sufficient discipline?

I would argue that “shall not be infringed” relates as much to peer review as it does to the government. It is a right pure and simple. Not “given” to us by the 2nd amendment, but only codified there lest the government or others try to usurp it.

Yes discipline is a requirement. This site documents through video the very practice of discipline I speak of. Any one who claims that such practice as documented is not sufficient seeks to infringe 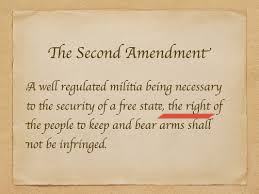 If so can you interpret?

Quickest way to lose my attention is runandonandonandonwithnoparagraphsetc 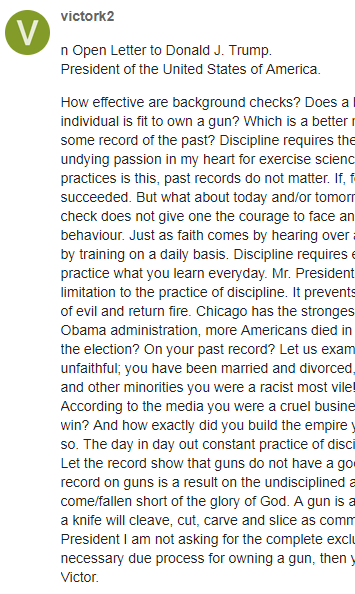 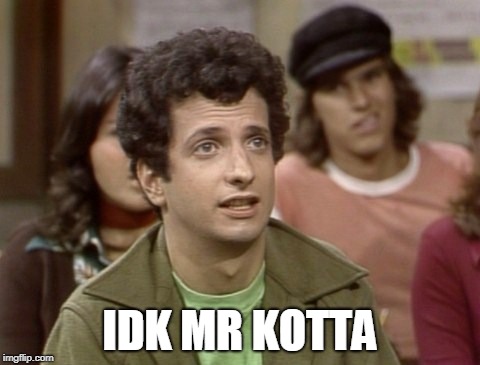 Yeah, trying to read an endless stream of consciousness paragraph was not enough motivation.
Sorry.

How did this get resurrected? It’s been dead for 3 months and the OP last seen in June.