This is going to be a project that will take me a rather long amount of time due to the unique circumstances of the time with Beer Disease causing the entire universe to lose it’s mind.

At sometime in what could be the near future, I and my family will be moving to Hawaii, either flying with my guns or shipping them in my household goods are the only reasonable options to actually get a firearm into the state. Once they arrive they must be taken to the Honolulu PD and registered in person… yay… Purchasing firearms in Hawaii is an even larger hassle…I’ve spoken to gunstores over there.

My current questions are:

Intents on the restoration, ensure that it’s functional, safe to fire, restored to as period correct as possible and have an heirloom. Marks are intended to be preserved, and I hope to follow the steps @Mosinvirus inspired me to take. It just so happened that one of my friends decided to sell me this since he knows he won’t get around to the project. 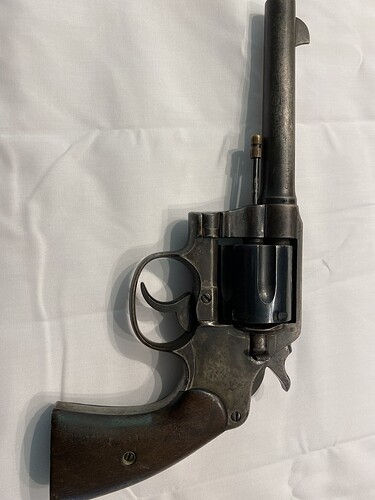 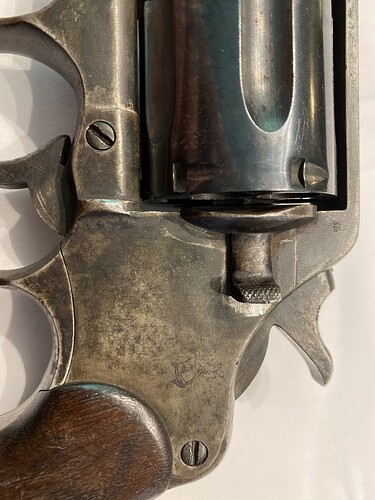 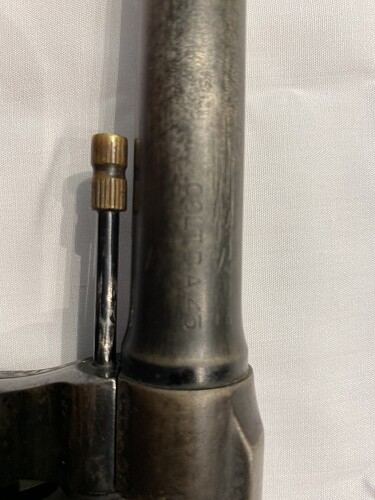 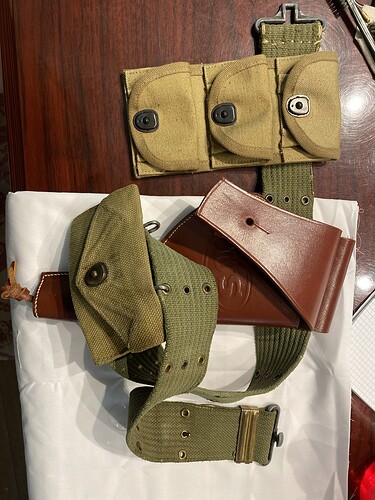 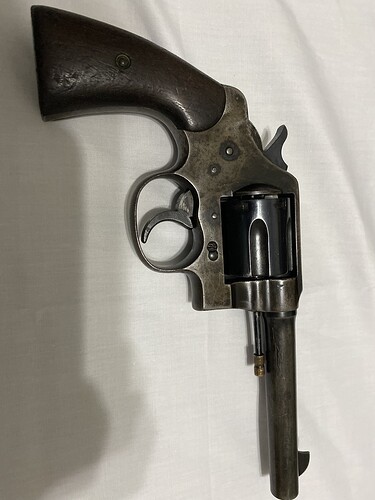 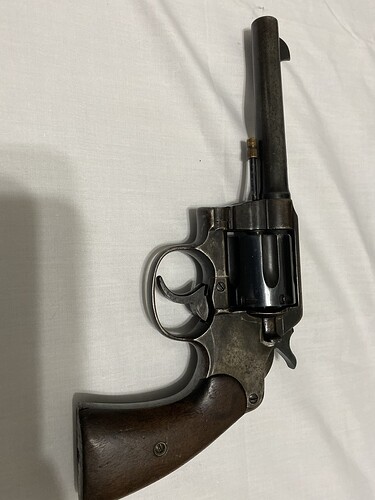 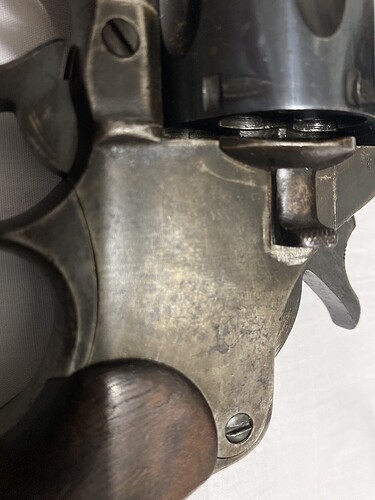 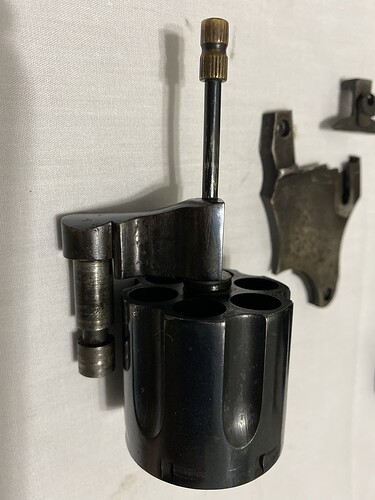 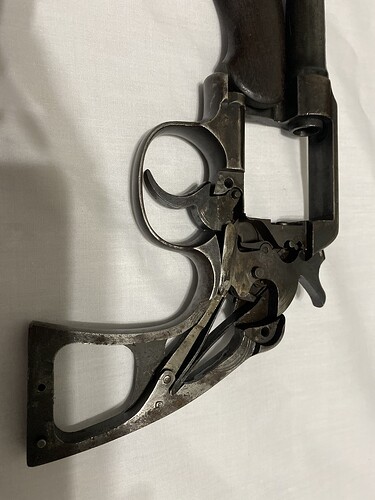 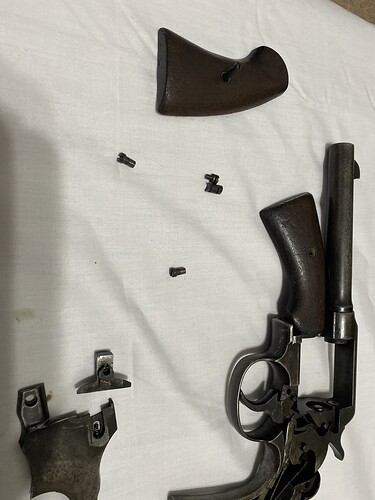 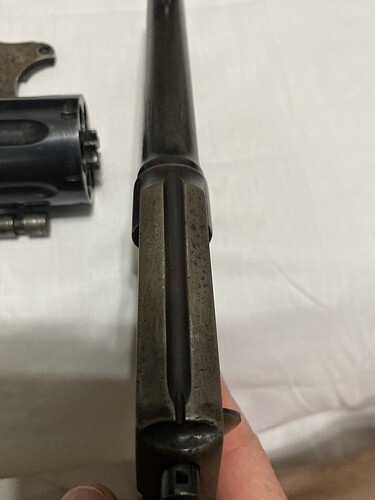 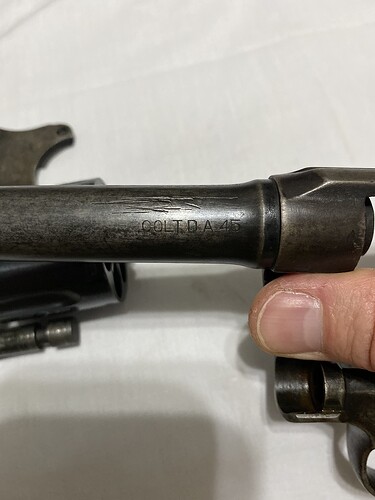 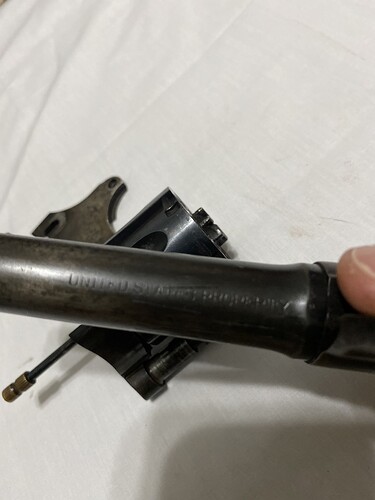 That looks like worn bluing to me. And cylinder looks to be a replacement. Do the numbers match?

@Mosinvirus the numbers on the frame and the arm match, so it seems that it is all blued. I was told the gun was parked but the cylinder was replaced and is blued.

There isn’t any pitting in the cylinder.

I believe the cylinder is numbered too. On the ratchet side at the outer edge of the cylinder with small numbers spaced far apart.

As for removing bluing/park/rust Evaporust will work. Preserving metal for the time being, grease after you displace water. But honestly I would do all of that after you move.

If your firearms never leave base why do you need to register them w/the state? A piece of old flannel shirt w/a tablespoon of axel grease worked into the cloth. Wipe the colt down with that and run a small piece through the cylinders and barrel. That should keep it from rusting in your household goods.

@Mosinvirus
Thank you for the info on that. I’ll displace the water soon, and then use some of the grease I have.

I think bluing would look the best, and if it was original to it, that’s what I think would be best.

@shooterrex, so I’ll be doing PT on one base and then working on another, and living in a housing community between them.

For me to shoot any EIC or other Bullseye matches I have to go to one of the ranges in Honolulu. To shoot the President’s 100 I have to fly to Camp Perry, Ohio.

Guns on base have to be registered, and I understand all of the long term consequences of them being registered, or posting pictures on the internet.

14 day quarantine to a hotel, and that seems to conflict with registering within 5 days…it’s an interesting situation

have laws about wearing masks in public
and look at us now, criminals everywhere

@Mosinvirus the cylinder is a replacement, all other parts I’ve found numbers on match.

@Robert, don’t know. I am pretty sure that there will be some overhead cover from mother Army, provided I follow the laws to the best of my ability. The safest is probably leave guns in household goods, but 14 days of quarantine sounds like dry-fire time to me.

When NY passed the SAFE Act, they did not exempt LE or the military bases. Ft Drum was also under NY law, so technically all the M16 mags were illegal, at least if a Soldier took them from a house off post to on base and vice versa. The Army generally has some sort of agreement with local LE, and any cases that came from a Trooper getting pulled over in trouble would have been thrown out of the Army’s Court System per order of the CG to the post JAG.

Basically so long as a Soldier is doing their best to follow the laws to the best of their understanding, and are doing their job, the Army will support them. There are many levels of governments that have their own rules, and my understanding is the Army is part of the federal, and the federal is often the 800lb gorilla. What does an 800lb gorilla do when it walks into a room? Whatever it wants… Sometimes things turn out differently, it’s interesting looking at various court cases and things that occur around the country, because I am not qualified to practice law and often look at it and am bewildered.

My statements do not reflect the DOD or the U.S. Army or Government and are the express opinion of the author to the best of his understanding of what the truth is, and his limited ability to convey ideas and thoughts in words that do not have tonality, or body language.

My statements do not reflect the…

@Mosinvirus, Evaporust will displace the water, then grease it up?

What I meant is that if you use Evaporust to remove bluing, park and rust and flush parts with water, after you should use wd40 or something similar to displace water and then grease up the parts.

If you are not doing anything to the revolver right now you should just wipe it down with grease as suggested above.

It should be alright stored covered in grease, even without bluing correct?

I appreciate your help in these basic questions, there are conflicting answers I’ve found online…the problem with all the information at your fingertips.

Bluing and parkerizing simply create a layer that retains oil. That is why even blued and parked guns can rust if oil is completely removed.

And yes, without bluing or parkerizing the steel will not rust if it is coated with heavy oil or grease. Assuming none of the steel surface becomes exposed to the elements