I could have sworn there was a “photography” sub forum under “Hobbies.” Wasn’t there when I went to look for it earlier.

Either way, I started playing around with pinhole photography this morning just for fun. I haven’t done much photography over the last several years and decided it might be interesting to get out my homemade pinhole “lens” to see if I could make something that looked like a passable photograph. The results are not spectacular but it will be something different to play around with and might get my photography bug moving again.

This is one of the shots I took this morning. Need to back off the ISO and increase my exposure time. This is after some very heavy handed photo editing. 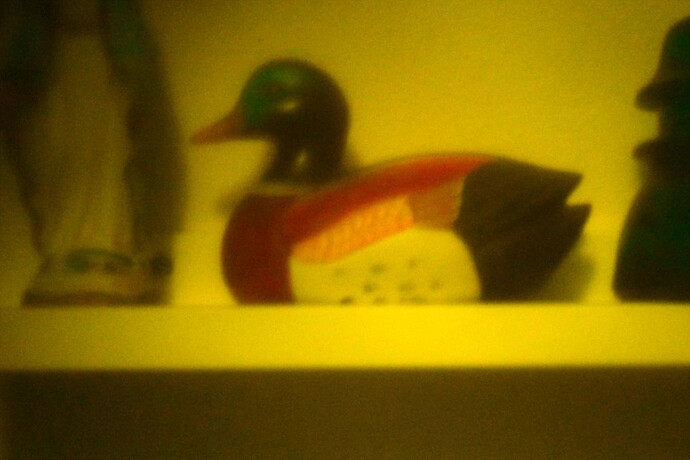 “photography” sub forum under “Hobbies.” Wasn’t there when I went to look for it earlier

Its right there where you put it

wth is that anyhow?

The mirage is too great

It really wasn’t intended as a suggestion.
For some reason, I legit thought we had a “Photography” sub forum.
It really was a good idea though.

wth is that anyhow?

In the days before digital photography, people who couldn’t afford an actual camera would get a cardboard box or some other container and photo sensitive paper. They would tape the paper inside the back of the box and poke a pinhole in the front. You would leave the box sit in front of whatever you wanted a picture of for awhile and the light would slowly seep in through the pinhole, leaving an image on the paper. After you left the box long enough to get your desired image (hopefully) you would take the paper out and run it through photo chemicals to stop the exposure process.

Drawbacks: Exposure times were very lengthy. Not good for portraits or anything moving. (Fine for snapping that last picture of your dead relative though.) No way to control ISO or other elements of the photograph and the results are usually pretty grainy. Needs LOTS of light. Nighttime and low light settings do not work for pinhole photography.

Eventually camera companies started making lenses for pinhole photography as well.A few even made dedicated pinhole cameras. Unfortunately, they still suffered from the problems mentioned above.

Now, in the magic land of digital photography, the easiest way to create pinhole photography is to poke a hole in a body cap that covers the hole on the camera where your lenses normally go. Drill a 1/16th hole in the center of the cap, put a piece of black tape over it and poke a hole with a needle through the center. You can also buy pinhole lenses for digital cameras but they are hard to find and usually somewhat pricey for what they are. Mastering the manual settings on your camera helps deal with some of the issues mentioned above but doesn’t eliminate them entirely. Even with the best camera settings, the images usually still need to be edited in computer software like Photoshop or Adobe Lightroom. You still need really good light and you’re still not going to be catching any pictures of Indy 500 race cars. It will also make your camera’s viewfinder useless because there isn’t enough light coming in to allow it to function.

It’s all guesswork until you really learn your camera. That’s really part of the appeal for me. It really gives you a need to understand your camera’s settings and work with it in manual mode. You might get away with one or two of the presets but usually not. the pictures will rarely come out perfect but the idea is to get them as good as possible before editing, just like regular photography. The better you get with pinhole photography, the easier it will be to work with real lenses. A lot of photography students will have to work with pinhole photography early on to learn how their camera really works and responds to different settings.

Plus, you can get some really cool effects if you get good at it. Pinhole photography has an infinite depth of field so if you get a good, clean shot, everything is in focus- near, far and in between. People have even shot sort films with pinhole lenses and it gives them a soft, moody feeling. (Although very slow action.) There are also those who do extremely long exposures and will leave a homemade box with photo sensitive paper out somewhere for over 6 months. You see sun tracks and all sorts of cool stuff in the finished product.

That, in a long winded nutshell, is pinhole photography.