April Contest Tell Us the Story of Your Favorite Firearm

This month the contest is Tell Us the Story of Your Favorite Firearm. Best story as voted on by the judges will get a $50 Full30 Gift Card.

**Rules of the Contest

1.Read the Rules before you post
2.**NO DERAILING THIS THREAD Comments on or questions about the story are allowed. Anything not related to a story will be moved to a special topic for people that can’t read and comprehend the rules.
3. Anyone with a account more than one month old or has obtained level 2 membership is eligible for the prize.
4. A picture of the firearm is question is a plus.
5. Submissions will remain open until April 25th.
6. Judges will volunteers from the SOG group.
7. Please post a firearm story even if you don’t think you will win.
8. Firearms that were lost in a tragic boating accident or one that you never owned personally (selfish uncle claimed it after grandad died) are allowed. I’m looking for a good story not a cool gun, the gun can be a rusty old Sears and Roebuck single shot break action 12 guage.

I’m looking for stuff like it was a WW2 being back that grandpa passed down to dad and dad passed down to me. Or dad gave me for my 10th birthday and taught me to shoot and i shot all the squirrels in 3 counties with it. Maybe I bagged my first buck with this it was a 16 point monster .

Are we doing this on this thread or will there be another thread like last months? I might actually have a pretty good one for this.

So, once upon a time, I was in Law Enforcement (both before and after my time in the Army). I remember a situation several years back where a man decided to attack a county deputy and an officer from a department that I frequently worked closely with outside of our local jail.

The long and short of it is the guy was in a sad place and taped up a hot glue gun to look like a firearm and charged the two men in the dark. They, unfortunately, responded as you would imagine they would. The deputy missed. The other officer landed several shots fatal wounding the man.

It was a sad story for everyone involved and resonated with us all. And, for some reason, it was a story the stuck with me.

Fast forward many years and I had just started a gunsmithing and sales business when I received a call from a friend of mine still with that department. He told me they were switching from P226’s to P320’s and were getting rid of their duty weapons.

Knowing I’m a Sig guy, he asked how many I wanted. I,naturally, responded with. “How many can you get?” Turns out he was only able to obtain one extra one and I waited patiently for him to tell me to come get it.

An hour before we met up, he called and said, “You don’t care if there’s a body on it, do you?” Of course, I didn’t. Definitely not at the price I was getting it for.

We met up and I got the gun and we were hanging out and chatting, as you do. He says, “Yeah, a few years back, some guy charged some guys with a glue gun and got shot outside the law enforcement center.”

I was, like, “Dude, I was on duty that night. This is it? Like, this is the one from that shooting?”

He verified it was. I decided right then I wasn’t going to sell it. Wouldn’t want to put that on someone superstitious enough to care about things like that. Those of you on our other social medias might recognize it as the “Arachnid.”

Dropped a lighter mainspring and a short reset trigger in it, new night sights, a fresh tan finish, and some insanely aggressive G10 grips. Basically building a Sig Scorpion from an old base model 226.

Of all the guns I have, it will certainly be one of the last ones I ever get rid of. Hope you guys enjoyed it’s back story. Obviously, it’s not one I usually tell to everybody. 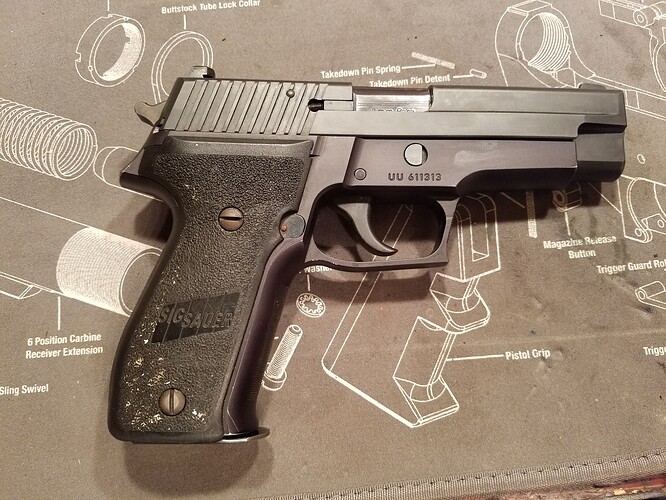 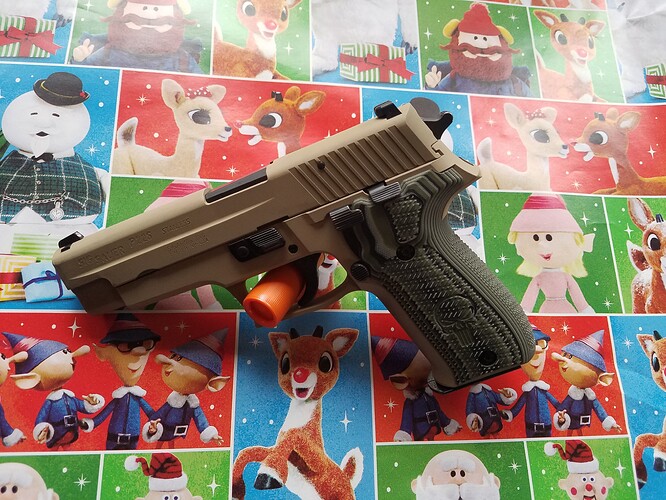 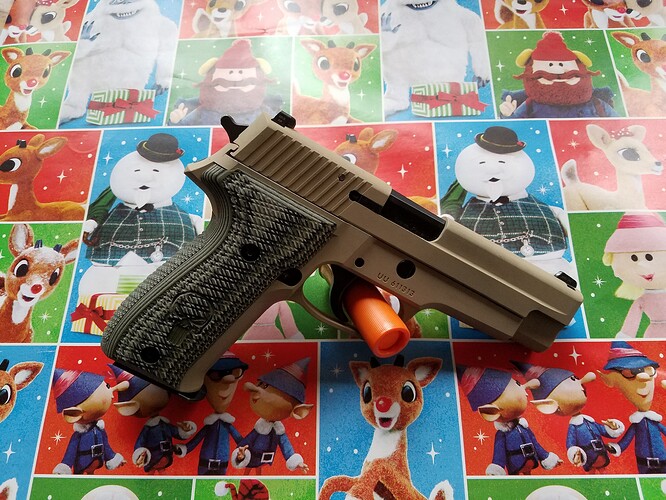 Is that the same pistol in all the pics?

Very nice job. I got a 226 police trade-in. I absolutely love those grips. Where can I buy some like those.

if I remember correctly, a site called cool hand grips.

Hey, it’s not on me. I did what I was supposed to. Not derailing if I’m following the directions.

No beaver tail, either. But, I don’t really care for beaver tails, anyway.

My favorite firearm is a Marlin 30/30 lever action. It currently belongs to my dad (Cheif Grande TeePee). It’s the first center fire rifle i ever shot. It’s the first rifle i ever took hunting. I used to think it was the most accurate rifle a man could own, with the knock down power to take anything. I’ve grown up and shot better over the years but that rifle is mythical in my mind. I’ll always remember dad taking me out into grandpa’s (Cheif Seasoned TeePee) pasture leaning a board up on a tree in the woodline and shooting it for the first time. I still remember the kick of the rifle and the smell of burnt powder and the deafening boom. Thinking about that day still brings a smile to my face. I’ve told my dad that he can leave the rental properties, his house, his airplane, all of it to my brother if he leaves me that rifle I’ll be happy with it till the day i passed it on. Modern rifles are cool but the old style of blued steel and hardwood will always be classic.