memory serves me - 90% into 300mm at 300m was the minimum and for the not so good the 7.62 Bic was commonly used for the borderline cases and wither the mess was calling. We had to do at least two quals a year, always seemed late fall / winter and early summer.
You could also qualify out to 1000m which meant some additional coin on the pay check - 50% into 300mm but 100% at roughly 2 1/2 feet square and on the average was 80% or better.
The thing is most of the shooting was done at timed exposures of 3, 5 or 10 seconds and not shooting was a miss.

I didnt realisebthe FAL was capable of that sort of accuracy. What sort of optics were you using? Seem a bit much for an acog or red dot.

optics?
simply the Mark 1 EB and setting the diopter to 10

Nice… You shoot far better than me. I was hitting a paper plate at 200 yards with a FAL but thats about as good as I got with it

Here is your AKS, or AKM of what letters they put after it.
You and everyone here has not and will not EVER see an AK-47. So stop helping Beto lie about firearms. (yes some have seen them overseas, but they are very old. The last one was made in 1961.

I was part of the Special Weapons Detachment at FT Lewis.
They have real AK-47s, How many does the US Army own?
When I retired in 92 there were 11 complete firearms, which 4 of them worked. 4 more for parts. Thats it.

Its a personal pet peeve. So call a spade a garden tool already.

How @Giantspeed jump starts his car 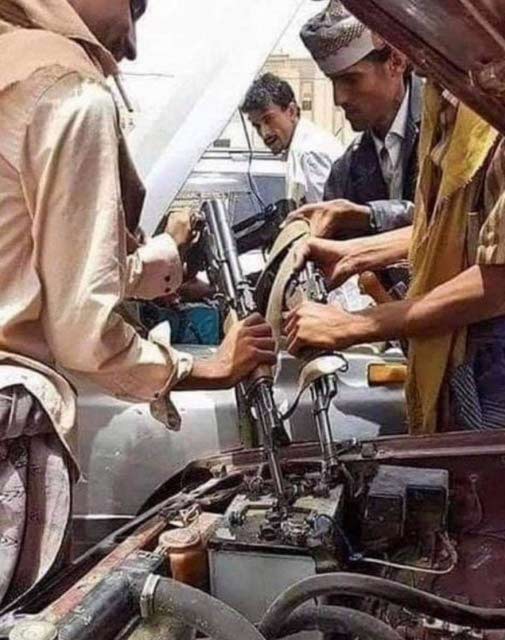 Won’t work, cheap beer can metal is not a good conductor.

Uncle Mike was a Patriot

Was Kalashnikov a commie? I heard he supported the United Russian Party which opposed the Communist party in Russia but given the time line he would’ve served the communist party,right?

I don’t know a whole lot about the man , although his rifle design is pretty solid.

Stalin jailed his father as a “kulak”. Would have had an effect on most of us I think.

In 1930, his father and most of his family had their properties confiscated and were deported as kulaks to the village of Nizhnyaya Mokhovaya,

Mikhail Timofeyevich Kalashnikov (Russian: Михаи́л Тимофе́евич Кала́шников, IPA: [kɐˈlaʂnʲɪkəf]; 10 November 1919 – 23 December 2013) was a Soviet and Russian lieutenant general, inventor, military engineer, writer, and small arms designer. He is most famous for developing the AK-47 assault rifle and its improvements, the AKM and AK-74, as well as the PK machine gun and RPK light machine gun. Kalashnikov was, according to himself, a self-taught tinkerer who combined innate mechanical skills wi...

I think he designed his rifle to save his fellow soldiers lives not necessarily communism.

Figure we’re talking systems not caliber. That opens it up. The 223 is a very good varmint round, but terminal performance was dubious until recently. The advent of CCB’s 224 MKZ bullets improved the kill zone.

Guess picking one over the other depends on use and conditions. General preference? For me its an AR. Going off to fight for an insurgency? Probably not so much. Hunting piggies in the dark? An AR 15 in 6.8 SPC ll or 30 Herret. DMR or Elk? AR 10 in 6.8 Western.

Tell me I can only have one semi auto rifle for the rest of my life? It would be my Americanised Vepr in 308Win.

I flagged you for this , @LonewolfMcQuade 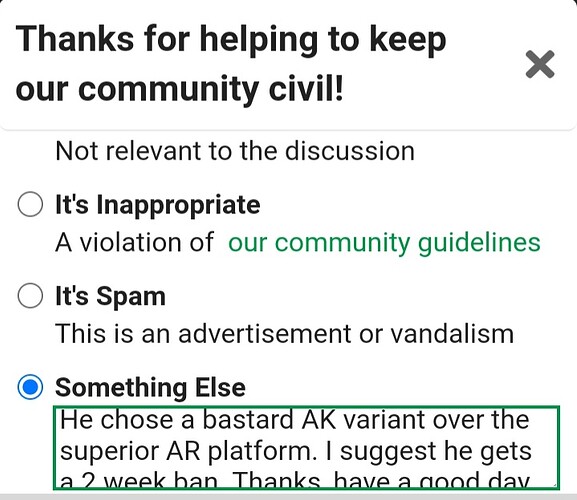 General preference? For me its an AR

That’s not been my experience, at 100+ yards you can watch a .223 fly and they don’t travel so straight as you’d guess

For plinking cost I’d agree though

How much would it cost to make it 4, asking for a friend?

So much that goes into accuracy. One barrel or receiver will like one bullet over another. Chrome lined or Melanite? Good heat treat or bad? Gas guns guns add a whole other layer. The importance of timing and gas volume almost require an adjustable gas system. I have seen identical builds by the same builder perform completely differently. Face the receiver adjustable gas block, and poof new gun. 224 in a bolt gun can be made accurate to 800 yards pretty easily, but that will tend to be for a particular high BC bullet. Once they hit transonic they can go sideways on you.

308 is even easier and they do better in the wind generally and with the shorter low BC nullets are more predictable going tranny of course the rainbow arc is what is. I love the 308 win. Varmints to Moose. It is hands down the most versatile case and caliber.

Must say the 6.8/277 is pretty versatile too, but in 2 different cases. The SPC II and now the Western which is just a improved 270 WSM.