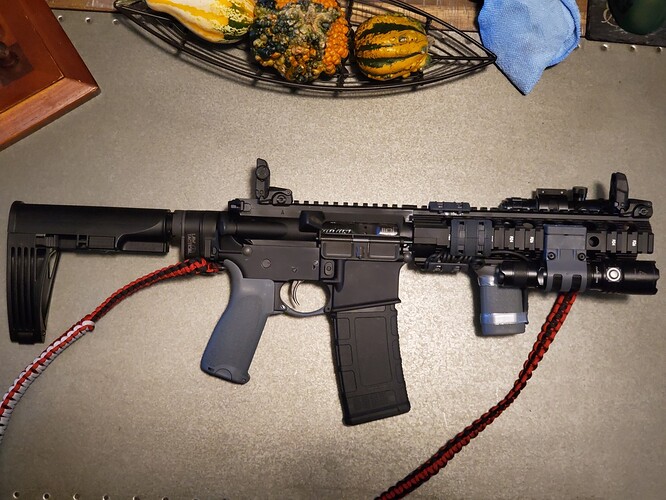 I’m eagerly awaiting permission to use my silencer from Uncle Sugar. This one was built and tuned to be suppressed.

That’s awesome. I’d like to do another 300 with a much shorter barrel. I don’t have much interest to do pistol caliber in the AR, but I understand the draw.

Since the Flux system has come out, I’m actually thinking of picking up a Sig P320 and the Flux instead of doing the next AR Pistol build.

I don’t have much interest to do pistol caliber in the AR, but I understand the draw.

I could say the same.

But then… with prices so good on just about everything on the market right now, I am very tempted. Very tempted.

Thus my look at the flux. It enhances a pistol caliber at a great price point.

People who tout pistol caliber AR builds seem to gloss over terminal balistics, and other than magazine capacity and perhaps lighter recoil, the biggest benefit of the larger, less-concealable, and pricier components seems to be aesthetics.

The Flux does all that at a much lower price point while allowing you to quickly swap the slide back to its concealable point of origin.

But that’s just my limited perspective.

The longer sight radius and better place for my off hand is what i like about the PCC. A lot easier to hit steel at 100 yds.

There are some pistol calibers that do perform better from a barrel around 10" long.

I was for years not thinking a pistol caliber AR pistol was something I wanted or needed, I bought a PSA 4 inch 9mm awhile ago and have been nothing but impressed, It runs wolf or tula steel like it was made for it, I have about 600 rounds through it and zero issues. I have been close to a year waiting on 2 more Suppressors and a 9mm or a multi-caliber in next on my list.