What experience has anyone here had with the new Kahr/Auto Ordnance US-made M1 carbines? If so how do they perform next to the WWII/Korean War USGI models?

The opinion on one of the “operator” sites seems to be go for the USGI, not Auto Ordnance. I had an Inland Arms USGI in the late '60s and was happy with it. I haven’t tried an Auto Ordnance but am tempted. You might want to wait and see if the Government allows South Korea to re-import M-1 garands and carbines which Obama disapproved.

A few years ago, Kahr/Auto Ordnance brought a bunch of guns to a local range for customers to try out. Unfortunately they couldn’t bring any M1 Carbines because they are not NJ legal. I did shoot a few of their 1911’s and 3 different “Tommy Guns”. In my opinion the Carbines, if they are anything like the Thompsons, should be good shooters. Of course originals will retain value and have a history behind them, but depending on the price the AO might make sense as a “shooter” rather than a collectable.

I have an Inland Mfg. Div. M1 Carbine marked 2-43, and I love it. I was just wondering if anyone had experience with current repros.

The Kahr/Auto Ordnance M1s seen to be the best quality repros. I’ve seen them, and they are nice, but with cast parts, how well do they stand up to the originals? I’ve seen a few negative things about the new Inland MFG M1s but maybe they fixed those problems.

That’s too bad about the new Inlands. You’d think if they use to make a bunch of them during WWII and Korea, they’d still know how to make them without any problems. I know nothing about the Kahr/Auto Ordnance and am wondering if there are any other new reproductions besides Inland and AO?

Well, the new Inland MFG is a new company from the Inland Manufacturing Division, General Motors. A group of investors bought the name and are making and selling the carbines with modern techniques. Check out Nutnfancy’s review on YouTube, and InrangeTV’s review here on Full30. The only other modern manufacturer of Carbines is, I believe, Fulton Armory. I think they user refurbished GI parts, and some new ones, but they’re close to $2000. Not really worth if you ask me, but they are good quality.

I worked on the AutoOrdinance product. I would not spend the money. The first one was brand spanking new. Rifle had 50 rounds through it. With just 50 rounds down range, the bolt lugs were already showing wear. It was like nothing had been hardened.

was looking for it for couple years… Just got it… 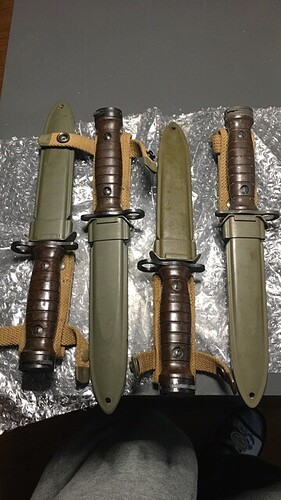 I bought an Auto-Ordinance M1 Carbine for my wife and it’s performed quite well. I replaced the simple non-adjustable AO rear peep sight with an adjustable GI rear sight.

I’m not going to say it’s on par with a Fulton Armory M1 Carbine. Those puppies come with chrome plated bores. They are in a league of their own, possibly better than a GI M1 Carbine. But at a price: ~$1,500.00.

BTW, check out https://m.youtube.com/watch?v=a9HcbfGMffI for a review of the Fulton Armory M1 Carbine.