Baltimore county PD to replace FNS 40 with Glock 17 due to accidental discharges.

Guess FN has been taking advice from Sig. What a shitty trend, lets just have cops and soldiers be our guinea pigs instead of doing thorough testing and using better QC standards.

From the article:
“The study by the Arizona DPS found that the pistols can experience out of battery detonations and accidental discharges from knocks to the weapon” Sure, because Glocks have never had any issues with negligent discharges. Guess they never heard the term Glock leg.

Glock leg is a training issue and Glock fixed the issues. Sig and FN both deny their design flaws. Not to say its a bad pistol but Glock does not seem to be having these issues ,currently.

" Three pistols experienced a trigger pin either backing out or moving slightly out of position. This trigger pin is a component that requires routine maintenance "

" Glock leg unknown A condition where a person shoots himself (or herself) in the leg while holstering their Glock pistol. This can happen with any weapon yielded by a careless user, but it is common among Glock pistols due to the lack of a manual safety, relatively light trigger pull, and lack of a proper hammer to push on while holstering. "

Every time I holster my weapon I check to make sure the holster is clear. It’s not a hard step to do.

Thats true , ive never had an ND like that either but then again alot of people just are not safe with guns. Then they blame striker pistols for not having manual safeties.

And we all thought SIG had issues Baltimore County police are replacing its officers’ guns that have now been shown, on video, to fire when they shouldn’t.

Then they blame striker pistols for not having manual safeties.

My safety, that’s why I got it tattooed. 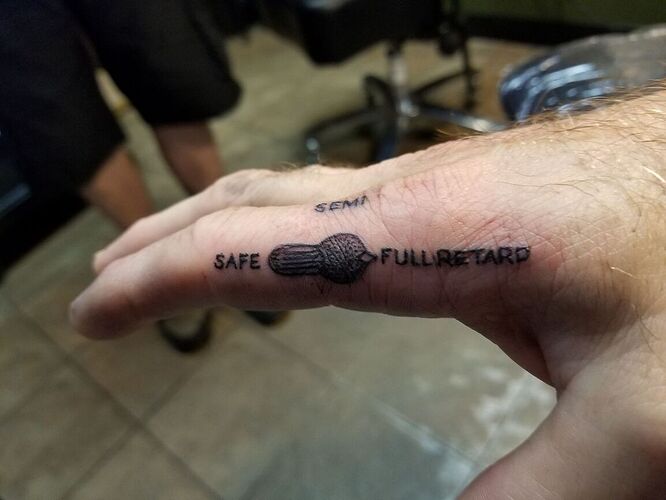 Sorry about that , I completely forgot. Lol