Battle of the Bulge: The Epic WW2 Battle That Cemented American Confidence 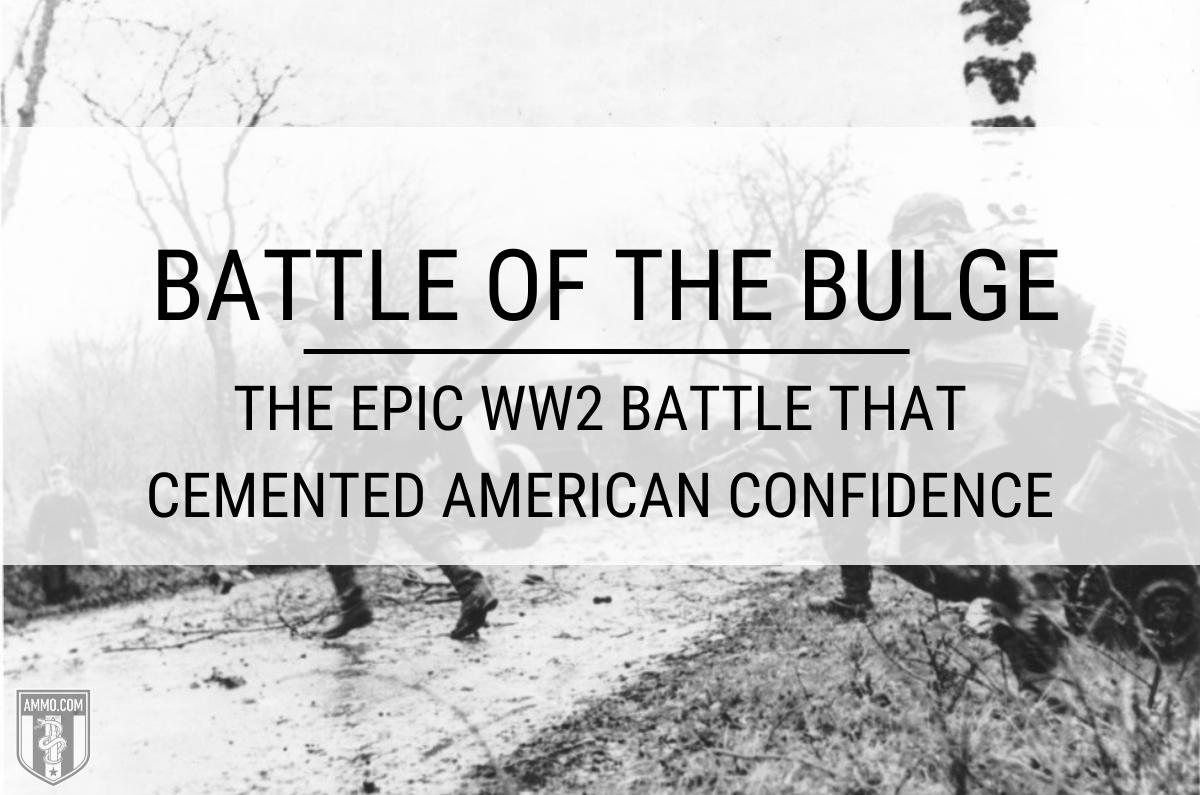 When we think about American GIs in the European theater of World War II, much of our image comes from the Battle of the Bulge. Named so because of the distinctive “bulge” shape of the front lines, this is where so many American men laid down their lives on fields of frozen mud in France.

What Was the Battle of the Bulge?

The Battle of the Bulge was the result of Hitler’s last dying gasp lashing out against the increasing pressure of the Allied forces in France. Hitler’s goal was to drive a literal and metaphorical wedge between the United States and the United Kingdom.

All told, the battle was six weeks of fierce winter fighting in the forests of the Ardennes region of France. The nearly ceaseless combat took place between December 16, 1944, to January 25, 1945, in the bitter, freezing cold. Old Man Winter took 15,000 with trench foot, pneumonia, and frostbite.

Winston Churchill called it the most important American battle of the war. It was certainly the costliest – when all was said and done, over 100,00 American souls were left in the ground in France.

A Surprise Attack by the German Military

The attack was a complete surprise to Allied commanders, who were overconfident due to a string of recent victories. What’s more, poor weather in the area made air reconnaissance difficult to impossible. When 410,000 Germans came marching into the Ardennes, Allied forces were woefully unprepared for the attack.

Indeed, the respite in the Ardennes was supposed to be for letting seriously battle-fatigued soldiers get some much-needed rest and relaxation. The Allied intelligence thought that the Germans were using this area for similar purposes, and so sent small numbers of men out there to secure the area, which they considered completely safe, both due to their intel and the dense, woody terrain.

The battle began with a 90-minute barrage of 1,600 artillery guns firing. The initial Allied response was that this was an expected, minor, and localized counterattack. When this proved to be untrue, 250,000 Allied troops arrived as reinforcements.

Snowstorms slowed the advancing German army, but also made it impossible for the Allies to provide any air cover. The Germans were further hampered by supply chain issues and traffic jams due to the weather.

In the north, the Germans were met with fierce resistance from the U.S. 2nd and 99th Infantry Divisions. Known as the “Northern Shoulder,” Americans were outnumbered five to one but eventually won the day due to road conditions and an unparalleled tenacity in battle. Equally tenacious, the German soldiers continued to fight tooth and nail without food or fuel. Eventually, their supply lines were cut entirely, forcing most of the men to flee.

The American battles of the Northern Shoulder are considered the most decisive of the entire campaign. Despite being outnumbered five to one, they were able to inflict a casualty ratio of 18 to 1 (in no small part thanks to the 30-06 powered M1 Garand battle rifle) in a battle where 20 percent of their effective force was taken out of the fight.

In the Bulge itself, the German offensive was much smaller, but still significantly overwhelmed the Allied troops in terms of both manpower and firepower. The Germans were able to force the surrender of the 422nd and 423rd Regiments of the 106th Division with a single pincer movement.

The Bulge, as one can tell simply by looking at a map of the battle, is where the German military had the most success, but it was on the Southern Front of the Battle that the biggest Allied breakthrough was made. During the Siege of Bastogne was when Eisenhower realized that the German’s biggest strength – how quickly they could move in battle – was also their biggest weakness, leaving them overextended and easy pickings for a counterattack. Upon hearing Eisenhower’s plans, General Patton is said to have remarked “Hell, let’s have the guts to let the bastards go all the way to Paris. Then, we’ll really cut 'em off and chew 'em up.”

The tide began to turn when the Allied forces launched their counteroffensive on December 23, after the bad weather cleared. A substantial German counterattack forced the Allies back into defensive positions. At this point, it was so cold that engines had to be run every half hour to prevent the oil from congealing inside. During a massive German retreat on January 1, which the Allies could not immediately follow up on, most of their heavy equipment was abandoned.

It was all over but for the shouting. The Germans were retreating out of the Ardennes but were fighting fiercely on their way out. On January 7, Hitler agreed to completely evacuate the area.

The Battle of the Bulge was at an end.

Why the Allies Won: The Legacy of the Battle of the Bulge

When the Allies engaged the Germans during the Battle of the Bulge, they were fighting a very different Army than the one that had conquered France the first time. After repeated assassination attempts by members of the Regular Army, Hitler became increasingly paranoid, relying more on the political troops of the SS. As such, the units involved in the Ardennes Campaign were more chosen for their loyalty to Hitler and Nazi ideology than they were for their acumen in battle.

On the other hand, the American and Allied forces were fresh in the fight, buoyed from regular victories and their officer corps was chosen for their success on the battlefield. While the German soldiers themselves could provide a fierce fight against the Allied troops, the German command structure simply was not up to the task of taking on Generals Eisenhower, Bradley, and Patton.

By February, the battle lines were roughly back where they had been at the beginning of the German offensive. The Allies continued to press the advantage gained from the heavy casualties they had inflicted, continuing to push back the German Army. By the end of the Battle of the Bulge, the German Army was in total shambles, shattered by the Allied counteroffensive and on the run back to Berlin.

Official casualty statistics vary but do not differ on the main points. Not only did America suffer heavy casualties in the fighting, but their casualty levels were also wildly out of proportion to their share of the fighting force, showing just how gung-ho the American GIs were in the Battle of the Bulge. The Americans also gave as good as they got, killing about as many Germans as the Germans killed Americans, despite their significant numerical disadvantage.

The Battle of the Bulge was a turning point in the war, which had as much to do with American battle tenacity as it did with German organizational incompetence. The massive victory secured only sought to further elate the American forces and solidify their alliance with the United Kingdom, the exact opposite of the intended result. The Germans had advanced as far as 50 miles in some cases but were unable to hold any ground gained.

The Battle of the Bulge is interesting for another historical reason. It is the first time in American history when racially integrated units fought on the battlefield. Faced with a massive shortage of men, General Eisenhower moved black soldiers from support positions and segregated units into the main of the fighting force.

While it doesn’t have the same easy recognition factor as the Battle of Lexington, America was no less forged in the crucible of the Battle of the Bulge. It was here that the cocksure American confidence on the world stage that would mark the next 25 years was born. America, it seemed, could not be licked by anyone, not even the full might of the famous German war machine. It was an air of euphoria that would last until the Vietnam War.

Battle of the Bulge: The Epic WW2 Battle That Cemented American Confidence originally appeared in The Resistance Library at Ammo.com.

My Grandfather lost his best friend at the Bulge. The history of the Bulge he and his friends gave me was one of hatred and disgust for the generals and politicians they saw as the cause of it, anger over the wasted lives, almost the Benghazi of their day, always found it odd history books didn’t mention those mistakes, some of them were there… wouldn’t they know?

The history of the Bulge he and his friends gave me was one of hatred and disgust for the generals and politicians they saw as the cause of it, anger over the wasted lives, almost the Benghazi of their day, always found it odd history books didn’t mention those mistakes, some of them were there… wouldn’t they know?

Just wait to see the ‘folks who were there’ write the next ‘Mistory Books’ and how they address Afghanistan, the pandemic and coup d’état. 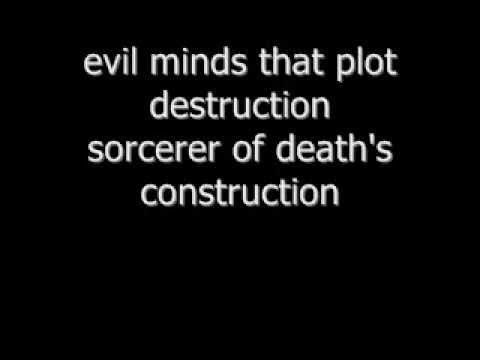 Was there in the 70s. It was still illegal to dig anywhere for fear of finding ordinance.

Doubt they’ll even bother teaching about it. I don’t remember the words “Korean War” mentioned once during my entire stint in the public education system.

Yeah I think they wait til the generation is dead or walking with a cane.

Hmmm and wonder when that war (Police Action?) will end? Soon I hope, so we can put it in the ‘Mistory Books’…

BTW my Dad and one of his brothers made that one. Two others made the ‘Big Show’, Grandpa made it to the War to End All Wars. The 5th brother had enough sense to listen to his 4 older brothers and his father.

Edited to explain that last sentence a bit more:

My Grandfather suffered from ‘Survivors Guilt’ and his injuries for the rest of his life after WW I. His oldest was never quite the same after Sicily & Italy. The next one down was OSS, we know now what he did. After he died things came out. The Korea vets were jaded and had bitter views. Both thinking that the military had become political pawns and felt it was used badly as a result. Though they never talked about particulars, both had problems post service with short fuses, drinking and fighting. Eventually both quit drinking, but my Dad always had a hard edge. None of them were unscathed.

Collectively their advice to the youngest, the baby, was go to College.