I bought a Precision Matthews vertical mill in December and spent January and February practicing on assorted metal pieces. Last week I finally got up the confidence to cut some gun parts and so began my Build No. 2 – a Government 9mm (all my other 1911s are 45 ACP) that will end up with a Parkerized slide, frame, and MSH/Magwell with matte stainless steel small parts.

First up was the JEM ‘bald’ slide. 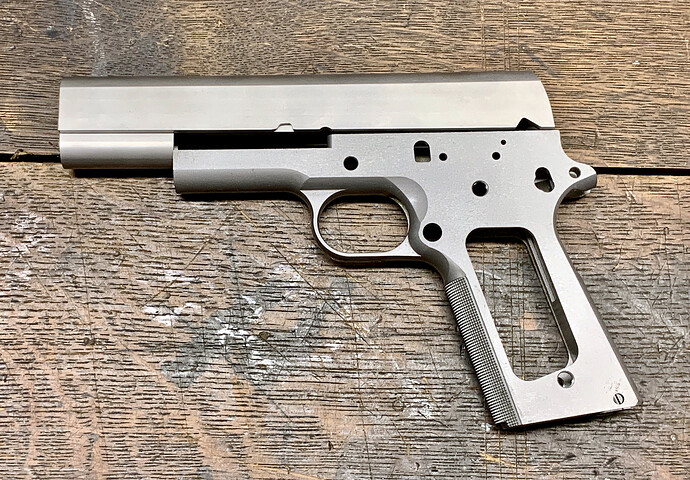 And my first step was to flatten the slide top. My plan is to do as much of the “cosmetic” work to the slide as possible before starting the slide-to-frame fit in case I screw up the slide. I don’t want a modified frame to deal with for a new slide. 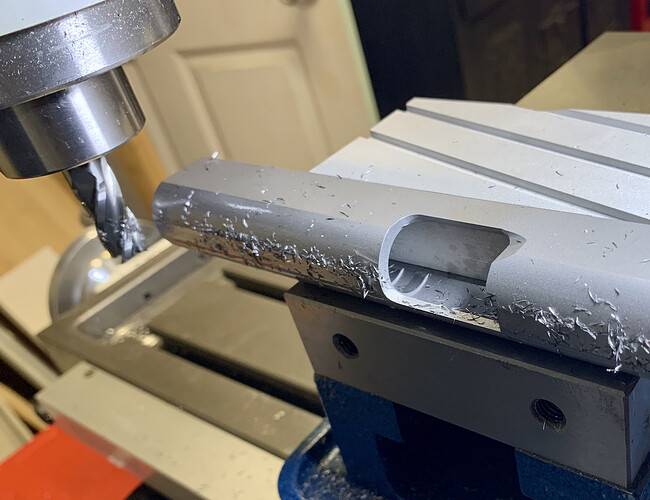 After that, my version of top “serrations” and Novak front and rear dovetails. Neither this, nor my Build No. 1, would have been possible without a lot of help and advice from this forum. It is an amazing source of knowledge and inspiration.

Custom slide work, I love it

Looking forward to seeing how this build goes. Looks great so far.

I approve! Gonna be a good one @BobRock!

Looks like you are off to a great start, can’t wait to see the finish.

OK, so I’m back a Build No. 2 again. I got distracted by making a simple jig to hold grip panels so that I can accurately drill and countersink for grip medallions. My X-Tac Elite has thin grips and I thought that gun deserved Wilson Combat medallions, so: 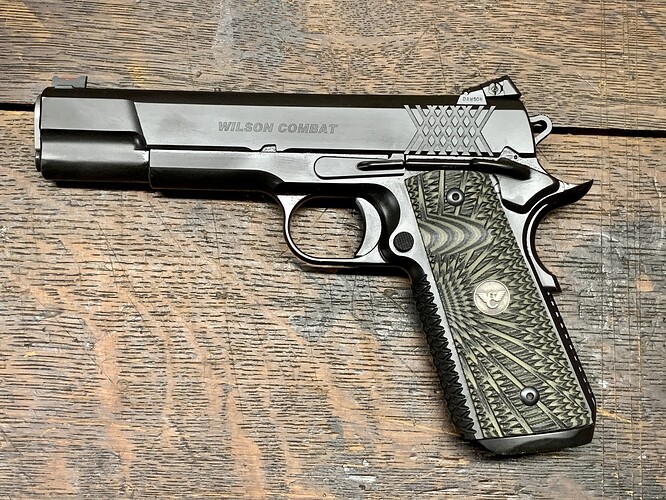 In the process of doing that, I found that my mill’s DRO readings were off. Come to find out (with the excellent help of Precision Matthews Technical Support) I had somehow gotten the DRO configured for .2um track resolution and metric mode – it was supposed to be set for 5um track and imperial mode. The weirdest thing was it it wasn’t off by a big enough amount to have casually noticed. But over distance the 0.016"/" error added up!

And then I spent a good bit of time thinking about how best to hold the frame to get started machining that. I ended up with this: 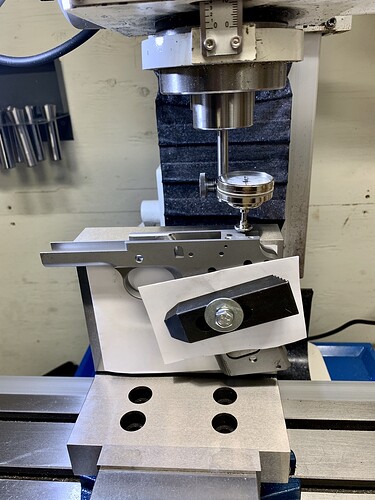 Which model did you get? I’m looking at the PM-25MV with 3 axis DRO and power feed, coming in around $3K looks like a good setup.
Had a mini a while back with power feed and home job DRO’s. Been borrowing as needed lately but no DRO or feed on the beast.

The PM-727M gave me at little more Y and Z travel (but gave up a bit of X). It also has a constant speed more which gives me a better torque curve, but a lower range of speeds. It’s also 200# more which I hope is giving me extra rigidity. I have no power feed.

I’ve been pretty happy with it, but I don’t have a point of reference to know any better.

A few years ago I bought the PM-835 knee mill (no DRO no power feed) and a PM-1236 lathe with DRO. I’ve been pretty happy with both. There are a few areas where they show their Chinese manufacturing but all in all they are pretty solid machines. For the money the Precision Mathews are kind of hard to beat. I looked at the Grizzly but thought I was getting a little more for the money with the PM.

The frame is decked and the frame rails are cut. And today I sanded the top of the frame with 240 grit sandpaper on a surface plate and stoned the width with the Everglades stoning fixture (https://www.evergladesammo.com/shooting-accessories/gunsmithing/version-2-1911-frame-rail-sanding-tool.html).

The slide now goes on the frame by hand but with some force. It’s much too tight. I plan to finish the slide-to-frame fit with JB non-embedding bore compound (https://www.amazon.com/Non-Embedding-Bore-Cleaning-Compound-Limited/dp/B0018L9UOW?th=1) mixed with oil. That’s how Kuleck does it in his book.

I have been warned off of using other lapping compound because it can stay behind, even after a thorough cleaning, and continue to wear.

I used valve lapping compound from autozone and believe it cleaned off sufficiently,
I imagine you have the time to be thorough about it?

Yes, I plan to take ample time to clean carefully.

I read a story on a forum (I forget where) about a mechanic who found valve lapping compound still in an engine he rebuilt when he pulled it apart some years later! He must not have done any cleaning at all.

It has always stuck with me

For this build, I decided on a hybrid approach. I milled the 80% frame for deck height and rails. At that point the slide would not go on the frame without “too much” force (read, soft hammer and a serious whack). So I inked, sanded/stoned, fit, inked, sanded/stoned…

Until the slide would go on without “too much” force; I could get it on by hand, but it was still quite snug. My inking showed contact in some places, but not in others. The “no lapping” folks would advise continuing work with fine files and/or stones.

But I do not trust my skills at filing/stoning things without leaving humps and bumps and dips. MosinVirus I am not!

So I mixed up a 50/50-ish blend of JB Non-Embedding Bore Compound and Tap Magic cutting oil. And lapped until I was happy with the fit. The slide will slip, of its own weight, from in battery to recoil, and hangs just slightly at full recoil. I little bump and it will slide off the front of the frame, again, of its own weight.

I have cleaned and cleaned the slide and frame with brake cleaner under aerosol pressure and compressed air. I think it’s clean. But there will be more cleanings as I move along in the process and then another big one before I DIY blue it. Les Baer will have to think of me as he wishes.

Ahahahhahahaha he’s a purist
You’d like him I think

…
The frame is decked and the frame rails are cut. And today I sanded the top of the frame with 240 grit sandpaper on a surface plate and stoned the width with the Everglades stoning fixture () mixed with oil. That’s how Kuleck does it in his book.I have been warned off of using other lapping compound because it can stay behind, even after a thorough cleaning, and continue to wear.Any other opinions?

Hi @BobRock,
I just saw this feed. When I was considering lapping everyone warned against it. The Everglades ammo stoning fixture is good I used it to do my slide to frame fit. However, I found that the AO stones from Boride abrasives are the best. They remove metal better but are easy to control. They are much easier to clean and thus they will cut better. Some of the other types of stones will build up the metal filings and stop cutting and are difficult to clean. The only other thing to do is as always measure, measure, measure. You can find high spots and then take one of the AO stones and break it into a shorter piece and then work that area . You can place even a snort stone that you broke to fix the high spot under one of the set screws in the Everglades stoning jig and it will still help maintain the proper alignment with the deck and stones those high spots. Then when all the measurements seem good and it goes on fairly well then polish it off with the higher grits.

I appreciate you sharing your insight and passion for building. I too would like a mill but I need to finish my build 1 before I start thinking about getting one, but I think it would be quite exciting to be able to do more of my own custom work.

@pc1911 I have read a number of references on slide-to-frame fitting and many say to use no abrasive, some say the non-embedding kind is OK, others just lap away. I suppose each gunsmith, and DIY gunsmith, figures out what works for them. But I do think that the top guys measure and machine accurately enough that they don’t need lapping compound. I even read that Jason Burton fits both the top and bottom “rails!”

The stones I have from Everglades do seem to fill up fast and are hard to clean. I haven’t hit on the best way to clean them, yet. Do you have a link for where to buy the AO stones you suggested?

My first build was done without a mill (I did have a friend with a mill cut the cocking serrations for me). It convinced me that building was going to be a great hobby, a mill would give me a bit more flexibility, and it has allowed me to turn an 80% frame into a 100% one. But they are not cheap and learning the basics of using one is a project of its own.