What kind of firearms/weapon systems would you all like to fire on your bucket list?
For me I have a few on there starting from S&Ws 500 magnum to the m2 or Ma deuce as shes so loving referred to. Id also like to fire FK BRNO and a bunch of others.

For me, mostly original historical firearms.

I don’t care much about firing a gun really. They’re all mostly the same with just different recoil. For me it’s about handling and understanding the history of it.

For me, mostly original historical firearms.

Main gun on the M1A1. Ohhhh yeeeaaaah! A girl can dream can’t she.

My bucket list: I want to go on a wild hog night hunt (Texas) from a helicopter fitted with a mini gun, thermal optics & some tracer rounds.

I don’t know if there’s anything left I want to shoot. When I shot the Mk19, it kind of ruined me. Once you shoot a machine gun that shoots grenades, it’s hard to really compare anything else.

I guess my most important bucket list guns to fire are the .50 bmg and the .500 S&W Magnum (longer barrel - not the “snubby” ones).

Also looking forward to shooting the 6.5 Creedmoor at longer (greater than 300 yards) distance.

I want to shoot a full auto, original Lanchester MKI.

An original or accurate replica of a Gatlin.
Heck I’d even settle for the rimfire version.

The Armstrong 100-ton black powder cannon and the Badger tank.

We were looking at that for our honeymoon! And then I got pregnant and everything changed. Now range time is alone is precious and hard to come by.

I remember those days! I started family young, my daughter’s going to be 23 next week, my son just turned 21 couple months ago. Maybe you & hubby can plan a 2nd honeymoon down the road a little?

Maybe! Our daughter will be two in January and is a quite spirited child so we’ll probably wait until she’s a little older to take any trips without her.

Hopefully you can get out and do a hog hunt soon, maybe bring one or both of your kids along!

That would be nice, hard to get the 2 together! Lol my daughter’s finishing her last semester of nursing & my boy is in the ironworkers union. But, someday hopefully.

I want to fire bowling balls out of a cannon , shoot an RPG and launch anvils out of a medieval style catapult. Not really guns but its the same concept.

Anvils? I’d rather launch tiny people out of a catapult, they’ll make a neat shrieking sound as they scream flying through the air

I’ll bet lib launching from a trebuchet makes a cool sound too. 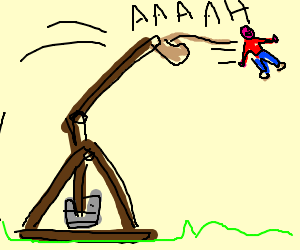