Buckshot vs Birdshot: What’s the Difference? 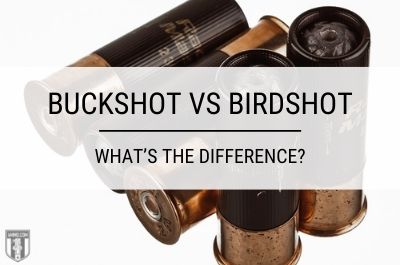 The terms “buckshot” and “birdshot” are often used a lot when discussing the different types of shotgun ammo. Many new shooters are confused about the difference between them, and that’s OK because we were all a little confused the first time we stepped up to the ammo counter.

In this article, we will explain the differences between birdshot vs buckshot so that you know exactly which shotgun loads to get for your shooting needs.

The Difference Between Buckshot and Birdshot Explained

Of these two shotgun shells, birdshot is the smaller of the two. Birdshot loads fire smaller pellets, but this allows ammo manufacturers to jam a lot more of them into the shell. When you pull the trigger on your Remington 870 or any other shotgun, the shot from the shell leaves the barrel and begins to separate and move outward from each other.

As its name implies, birdshot is primarily designed for hunting birds like quail, grouse, pheasant, duck, goose, and even turkey. However, birdshot is capable of small game hunting and is quite capable against rabbits, squirrels, and even snakes.

Although primarily developed for bird and small game hunting, birdshot is also used for shotgun shooting competitions such as skeet, trap, and sporting clays.

As small game animals and birds like quail and pheasants do not require a lot of stopping power to fell, birdshot loads are designed to give the hunter the highest probability of a successful harvest. This is why smaller pellets are used, as they create a wider pattern, and increase the chance of a successful hit. 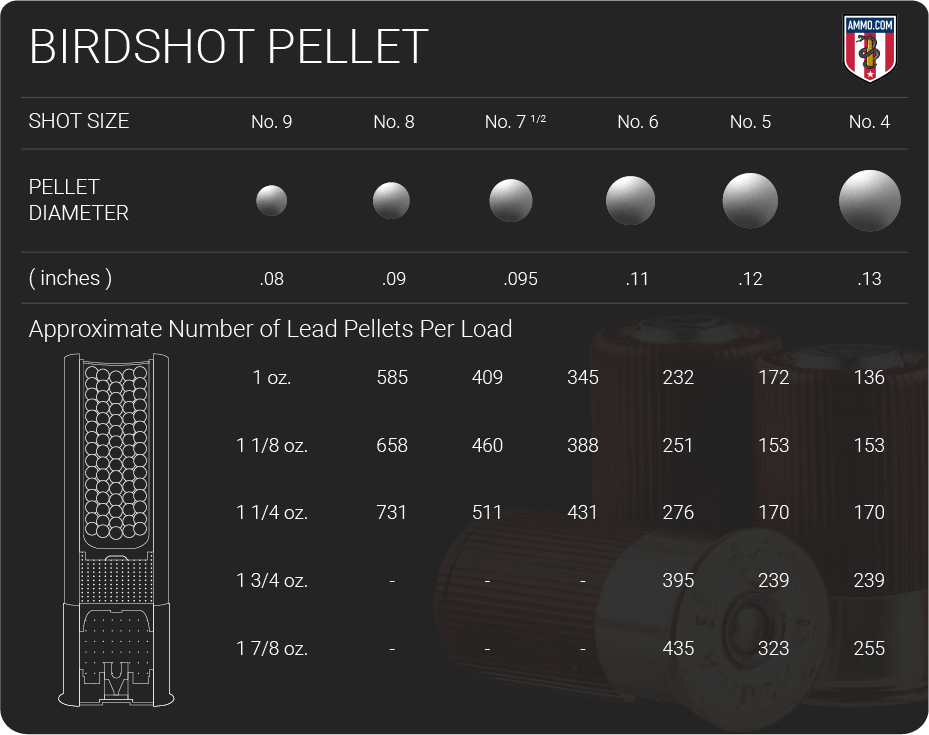 Pellet shot size works on an inverse scale, just like shotgun gauge, meaning that the larger the shot number, the smaller the pellet size. For example, #5 shot is larger than #8 shot. The most common birdshot sizes you’ll see at the ammo counter are 7, 7 ½, 8, and 9 which can be used for bird hunting and sporting clays.

Although some birdshot loads can carry well over 500 pellets, these lightweight projectiles don’t carry a lot of kinetic energy. Although perfect for felling birds or bursting clay pigeons, they are less effective on large game or in self-defense.

For that you’ll need something with a bit more oomph behind it…like buckshot.

Buckshot, like its name suggests, was designed for hunting medium to larger game. As a “buck” is a term for a male deer, buckshot was primarily designed for whitetail hunting.

Buckshot fires larger pellets but fewer of them. Furthermore, they are often loaded with more powder than birdshot, giving them higher recoil but increased penetration and range. Just like birdshot, when you pull the trigger on that Winchester SXP 12-gauge shotgun, the pellets exit the barrel and begin to separate. However, unlike birdshot, buckshot typically has a tighter pattern as you want all that stopping power put into a smaller area to harvest big game.

Just like with birdshot, buckshot gauge is measured in reverse. This means that No. 4 Buck will be smaller than No. 1 Buck.

Buckshot is typically not used on birds or small game due to the amount of kinetic energy it carries. Using buckshot on a bird is considered, by many, unethical and typically renders the majority of the meat inedible.

Although buckshot might not be the best choice for bird hunting, it’s widespread use by law enforcement has led many homeowners rely on a home defense shotgun loaded with 00 buckshot shells for protection.

The way a shotgun shell disperses its shot on a target is referred to as its pattern or spread. The type of pattern a shell has is typically tailored to its intended purpose.

However, there are other factors that will affect pattern as well. Certain shotgun barrels are designed to constrict near the muzzle, thereby tightening the pattern of the shot as it exits the barrel. This is known as a choke.

Some shotgun barrels have the ability to have chokes screwed into them from the muzzle while others have a choke integral to the barrel itself. It is not advisable to fire shotgun slugs from a barrel with a choke.

However, when it comes to buckshot vs birdshot, buckshot will generally have a tighter pattern while birdshot will have a wider pattern.

This trend directly reflects what each shotgun shell is designed to do.

As birdshot is meant to be fired a fast-moving targets like pheasants or clay pigeons, shooters want a wider spread of shot to increase their chances of a hit. On the other hand, buckshot loads are designed to deliver all its power into a smaller, more localized area to ethically harvest larger game or for self-defense. 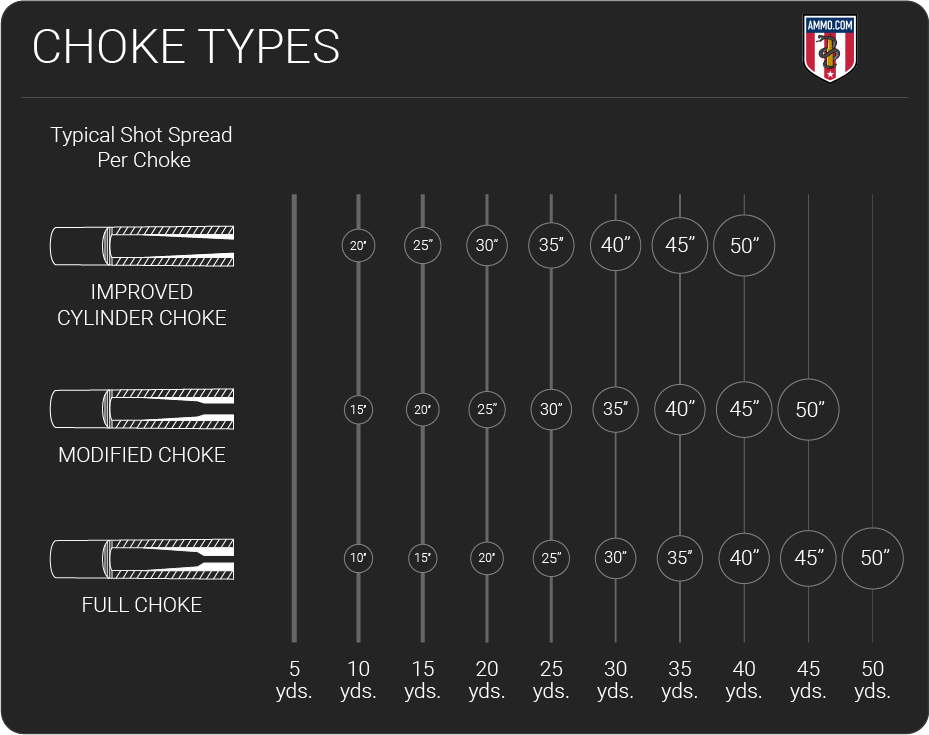 Shotguns are typically considered close range firearms, and neither buckshot nor birdshot is intended for long range shooting.

As spheres are not very aerodynamic, buckshot and birdshot will quickly lose velocity and kinetic energy as they exit the barrel and begin to spread. Birdshot is especially susceptible to this, as the small pellets don’t have much kinetic energy to begin with and are more affected by air resistance than heavier buckshot loads. However, as buckshot is heavier, it will be affected more severely by gravitational forces.

Effective range is highly dependent upon the pattern a shotgun load has in your firearm. Although there are some brands of shotgun shells specifically designed for longer range shooting, the general effective range for both buckshot and birdshot is around 40 yards.

A 12-gauge shotgun is highly regarded by military, law enforcement, and civilian shooters for being an incredibly powerful firearm for close range defensive situations or hunting.

Although buckshot and birdshot both generally have the same effective range, buckshot will have deeper penetration as it is firing a larger shot size with heavier pellets.

As the amount of kinetic energy needed to effectively harvest a bird is considerably less than what is needed for deer or home defense, birdshot is generally loaded lighter. On the other hand, buckshot is loaded hotter as it requires more penetration and kinetic energy to take down a deer or a bad guy.

Without question, buckshot will have deeper penetration and stopping power in most situations.

Shotgun ammunition is very affordable to the point that only extremely high-volume competitive shooters even consider reloading shotgun hulls.

For 12 gauge shells, target loads suitable for sporting clays or small game hunting, like Winchester Super Target, can be had for around $0.60/round. While a 00 Buck defense rounds, like Hornady Critical Defense, will generally cost upwards of $1/round or more.

The difference in price is often attributed to the difference in materials cost between the two types of shotgun ammo. Buckshot pellets are typically made from solid lead, while birdshot is typically made from a steel-core with only a coating of lead. Furthermore, buckshot is loaded with more powder and requires high-brass shotgun hulls to accommodate the higher pressure the shell creates. On the other hand, birdshot uses low-brass shotgun shells as less powder is needed to achieve the desired muzzle velocities for the smaller shot size.

The best shotgun ammo for hunting primarily depends on what game animals a hunter plans on harvesting.

Birdshot is the ideal choice for upland game, quail, pheasant, ducks, geese, and turkey, while buckshot is better for hogs, coyotes, and deer or other larger game animals.

The simple truth is that buckshot is not needed for small game animals, as these thin-skinned critters don’t require a lot of kinetic energy to humanely harvest. Furthermore, birdshot increases the probability of a clean kill as it fires considerably more pellets in a wider pattern than buckshot.

On the flip side, birdshot is not powerful enough to harvest large game animals and lacks the penetration needed to reach the vital organs. The wide pattern of birdshot means that large game hit with it will likely only be wounded and endure inhumane suffering. This is where buckshot is the better option, as its deeper penetration and tighter pattern have the power needed to humanely harvest large game.

Make sure to follow all of your local laws regarding hunting deer with buckshot, as some states and territories prohibit their use and only allow the use of shotgun slugs for deer.

The 12-gauge shotgun is highly respected as an incredibly effective home defense tool. Many homeowners rely on the stopping power that 12 gauge shells offer, however there is quite the debate raging over the effectiveness of birdshot for home defense.

The major point of contention centers around over-penetration. As buckshot is more powerful, there is the potential that a round could pass through drywall and injure one of your family members. There is some merit to this point, as birdshot loses a lot of its kinetic energy at range, it is less likely to punch through drywall. However, do not fool yourself into thinking that drywall is impenetrable to birdshot, as a close range shot will punch through sheet rock with little issue.

It is this author’s opinion that a homeowner should NOT use birdshot for home defense, and instead use buckshot for its overwhelming stopping power.

When in a home defense situation, a responsible citizen should bring enough power to bear to stop a bad guy in a single shot. The truth is, unless you are at close range (around 10 feet or less), birdshot lacks the penetration needed for self-defense.

To illustrate this one need only recall a hunting accident in 2006 when then Vice President Dick Cheney accidentally shot Texas attorney Harry Whittington in the neck and chest with birdshot. Whittington’s injuries were non-fatal and he made a full recovery. However, this would have been a different story had Cheney been using buckshot.

Buckshot provides the penetration needed to stop a threat quickly, which is the goal of any home defense situation. Although there is the potential for over-penetration when using buckshot, the advantages buckshot provides far outweigh this. Following the cardinal rules of gun safety and knowing what lies behind your target is the key to protecting you and your family members in any home defense scenario.

Many shotgun ammo manufacturers like Remington, Hornady, and Winchester currently offer buckshot defense loads specifically tailored for home defense. These loads maximize the penetration capability of buckshot while minimizing the potential for over-penetration making them ideal for protecting your loved ones from harm.

Buckshot and birdshot are two different types of shotgun ammo that have drastically different intended uses.

Birdshot fires a lot of smaller projectiles in a wide pattern that is ideal for hunting upland game, waterfowl, and for use in sporting clays competitions. Capable of firing hundreds of small pellets at a time, birdshot gives shooters a higher probability of scoring a hit on their target but lacks the penetration needed for self-defense.

Buckshot fires larger pellets in smaller quantities and tighter patterns to maximize penetration and stopping power. It is ideal for hunting medium to large game as well as for protecting the lives of yourself and your family members in a home defense situation. Although more powerful, buckshot does have the potential to over-penetrate, so care needs to be exercised when firing buckshot loads in self-defense.

Selecting the best shotgun ammo for you depends primarily on your needs as a shooter, just make sure that you get all of your shotgun ammo here at Ammo.com and be ready for any situation!

Buckshot vs Birdshot: What’s the Difference? originally appeared on Ammo.com