Carry a light... vs cell phone

any of you have thoughts on carrying a light in addition to the phone light? I guess its just 1 button for a light and maybe a couple for a flashlight on most phones, maybe even have to unlock it.

I carry a flashlight that can double as a weapon when I can’t carry my EDC gun. Also a good water bottle could work as a weapon

I carry a fenix flashlight in addition to my phone. Also carry a Kershaw Blur pocket knife and a bic.

Always carry a flashlight!! For any & every reason you could possibly think of, Always!

My EDC is a Surefire Titan Plus. Amazing amount of light in a small package, one AAA battery. Going on three years of EDC so there are some wear spots on the finish but the light looks the same as the day I got it. I have other flashlights around if something more substantial is called for but this is the one that comes out of my pliers pocket when I need a light. 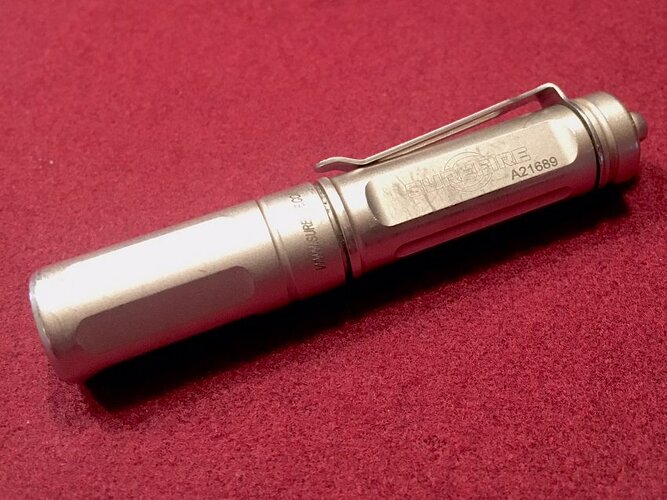 Facial reconstruction device. Scoops out eyeballs, scrapes off outer ears, sets teeth back to the epiglottis, opens nasal cavities, peels back scalps, and gathers DNA samples. Can be used for illumination. 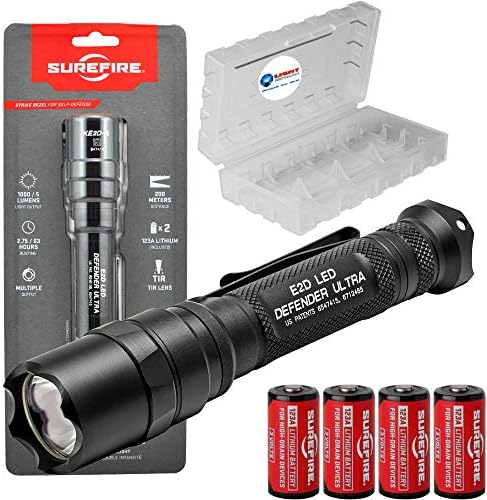 Always carry a flashlight!! For any & every reason you could possibly think of, Always!

The cell phone flashlight is handy in a pinch, but I would rather save my battery for communications. Plus, my iPhone battery life has been sh!t since the IOS 13 update. Is anyone else having that problem?

I go with the 10$ version - b/c I’m cheap mostly, but yeah it’ll work as a blunt force multiplier

Got one in black and one in cammo

I carry off body and the pack that does that for me (Maxpedition Fatboy) also carries lots of other gear. 2 really bright 18650 Li-Ion lights (one is a one off custom build, and the other is a LE), one for me and one for the wife, spare ammo, spare eyglasses, mace, knife, phone, I can’t remember what else off hand. Oh, and I always also have a smaller but even more lumens 18650 light clipped onto my pocket that’s instantly available. It has the potential to be so bright (4k lumens?) and put so much juice through the head that it starts to overheat in about 10 seconds. That level of illumination is rarely needed however. But if it is it’s absolutely blinding to anyone in the beam and looking at it. But it requires a cell that isn’t ordinary (for most folks) due to the current it can draw.

I don’t even know if the Emisar D4 is even made anymore. Click here

I modded mine with a belt clip that doesn’t mar the anodizing and it also wears a finger chain. But here it is before I modded it. 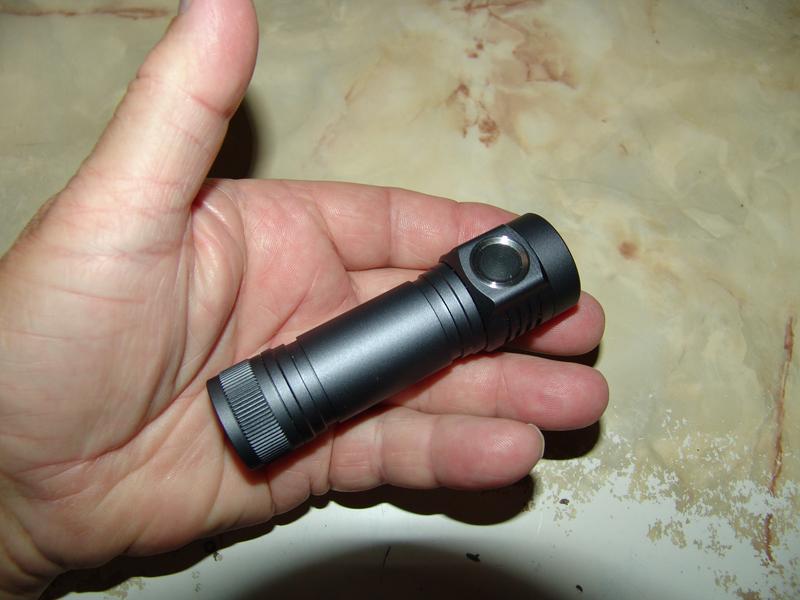 Been using the Olight for years and has never failed me.

Probably more than I should have written, but maybe it’ll help someone get a really good light for a decent price.

I didn’t mention it but we live rurally and if we don’t make the light we need at night we just don’t have it. Street lights and light pollution just don’t exist to light anything here. Oh, and I love light and I’m a sort of mild flashlight nerd. Most of my lights use rechargeable Li-Ion cells but a few are capable of using AAs. A cell phone light is pretty useless for us. Our backyard is thousands of wooded acres and the cell phone light just hasn’t been invented… Anyway, cell phone lights are for the city near as I can figure. Not a put down of them, they just won’t work for us in much of any role.

I have no idea how many of these lights are still in production.

In keeping with that info’ here are a few of my everyday lights. It’s also a flashlight primer of a sort. 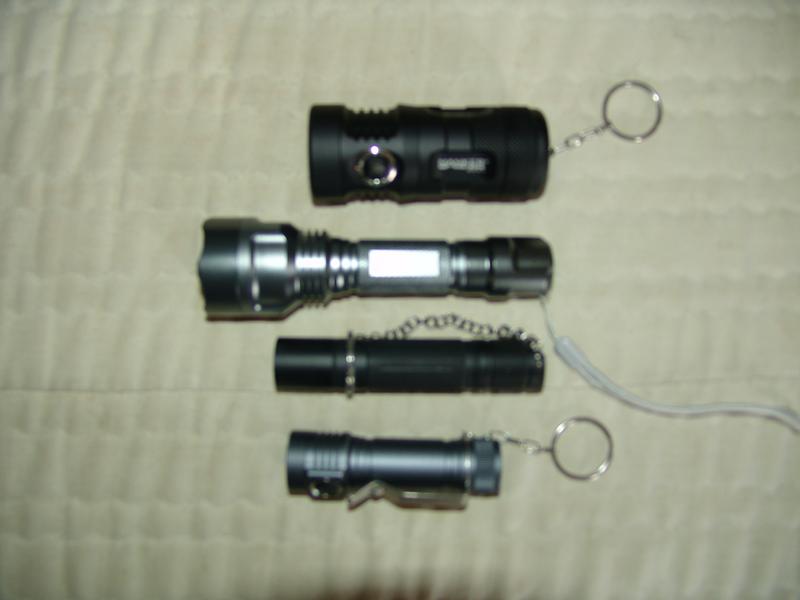 At the bottom is the Emisar D4 included for scale. Above that are the 2 lights I keep in my Fatboy and above that, the fat light, is a Manker mk41. It accepts and uses any AA form cell. It gets best light output with Li-Ion cells, but they drain much faster than AA primary cells. It may not look like it but it’s a pretty decent thrower. The other 3 lights all use 18650 rechargeables. One can pretty much tell the beam type by looking at the size of the reflector. One of these, the one with a noticeable reflector has the quality called “throw”. It might not have the most lumens (but it’s no slouch) but it can easily throw the beam over 100 yards. It’s also a one off custom light that the maker told me he’s never made one of like it before. It has a forward clicky that I wanted. Most other lights have a reverse clicky. A forward clicky means that I can just slightly press the button (no click) and get momentary light for as long as I depress it, press further and ir clicks locking in the function I selected. It makes it tricky to use for higher functions. The other 2 have no reflector size to speak of and produce a flood type beam. That doesn’t mean that they can’t throw that light a good distance, but they must do it with brute output, which means high current draw at full output which means the cells discharge rapidly as compared to lesser output levels. Output is selectable with each light. Some have discrete levels and some have ramping and appear to have a dimmer. The D4 has a dimmer and ramping but a double click instantly gets it to full output. Shut it off there and one fast click brings it back to full output since it has memory. One light has a wrist lanyard and the other 3 have what I call “finger lanyards”. The ring goes over a finger to prevent loss of the light.

Next is a “beer can light” that uses 4 18650 cells (each holding 3.5ah of juice) the model is called a Q8, included for scale for later pix. It’s approx’ 5k lumens max’ output. It can get quite hot in operation from the current draw that it’s capable of, but of course one doesn’t need to use that output all the time. It ramps from extremely dim to extremely bright. It has the same user interface (UI) as the D4 and then some, due to the larger chip that can carry more instructions. 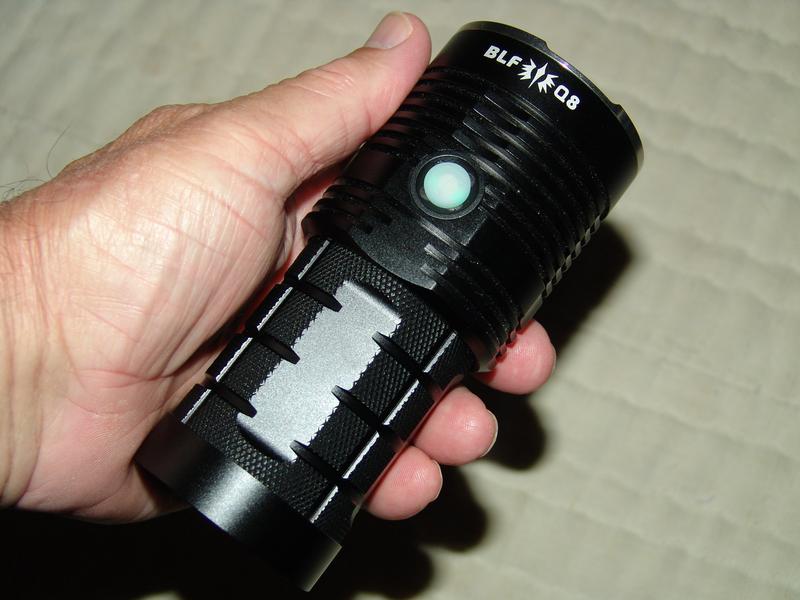 My everyday lights, these get used every night in one role or another. Again if we don’t make the light we use outside, assuming no full moon, there is no light. 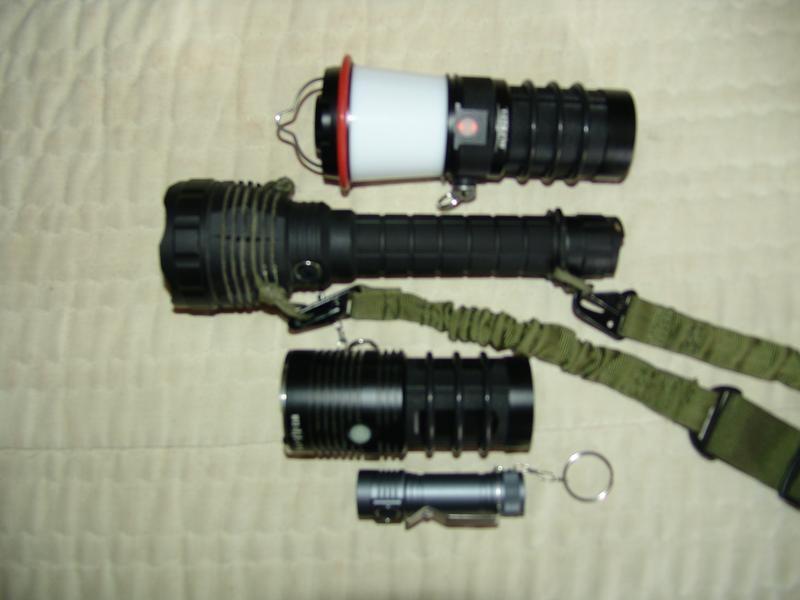 At the bottom is the D4, above that is the Q8 seen in my hand above. The slung light is a Convoy L6. It uses 2 26650 Li-Ion cells each having over 5 ah of juice. It gets used when I do nighttime chores for the animals since my hands can be free. Above that is the new LT1 lantern. It uses a Q8 body and holds 4 18650 cells. The max’ output is kept down to near a 60 watt lightbulb as it comes from the factory. I added the large o-rings for armor on both the Q8 and the LT1. When the sun goes down the LT1 comes on at minimum output for a nightlight because we can get power outages seemingly for no reason at all and I hate fumbling around in the dark. It’s better today, but in the past outages were far more prevalent. The L6 has a combo throw and a flood type beam. It has a good reflector but the mirror in the reflector has an “orange peel” finish to increase the flood quality. It’s an easy 100 yard thrower and there’s plenty of light. The Q8 has a flood type beam, and it too will easily light out to 100 yards, but it does so by sheer output and not by efficient use of the output. There is a lot of light being produced to light out to that distance and everything in a wide angle to the sides is also brightly lit up.

I have other lights, I did mention I was a flashlight nerd, right? But these are the ones that get used most frequently. All of them are waterproof at fairly shallow depths (1 meter? I forget the spec’) and are also shock resistant. I have one light for diving that I figure I’ll use if we get a hurricane and I need to go out into it. I keep the o-rings on all of them greased with silicone grease to insure they remain waterproof.

Then comes the one fun light. I have yet to find a use for it but it was just too over the top to not buy one when it was available in a group buy price. I introduce the light we affectionately call “Giggles” due to the sound everyone makes when they first encounter it. It’s an absolutely huge and heavy light hence the sling. It’s more formally known as the BLF GT (Gigathrower). It holds 8 18650 cells and is definitely a thrower. You can tell by the huge 5" dia’ reflector. It can easily throw a beam over a mile in a dark area. It doesn’t have huge lumens because it derives it’s “power” by the way it efficiently handles the lumens that it produces. When I first got it I told my neighbors 100 yards away to look into their sunroom as I shone the beam into it. They didn’t need lights on inside and it was brilliantly lit up. One can get into trouble with it and that was the last time I ever did anything like that with it. 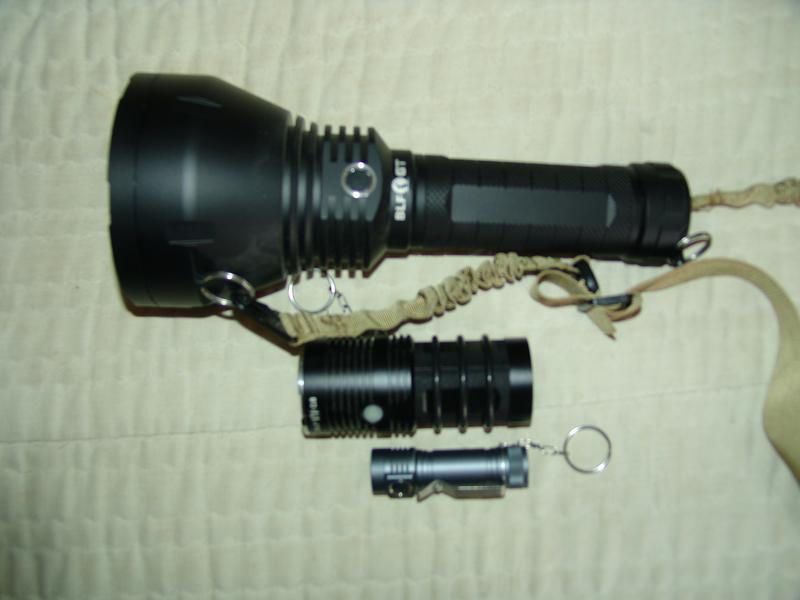 The Q8 and D4 are below it for scale.
Here is the video that earned it the name Giggles. 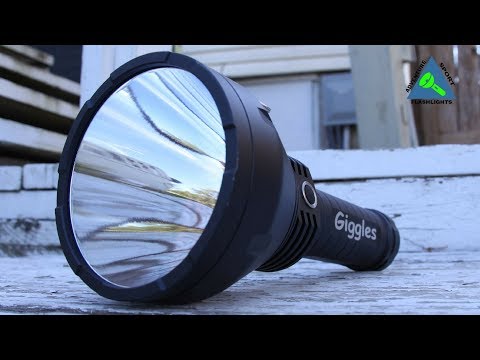 FWIW, the “BLF” seen on many of the lights is an acronym for “Budget Light Forum”. The membership designs some really killer lights. Me? I’m just a user of lights that others design and get built for the membership. I pretty much don’t buy standard factory lights anymore. The last normally available ones I bought were purchased to get AA compatibility. Since Li-Ion rechargeables are just so superior to primary cells for driving high output lights, but primary cells are easier to find in the wild and I wanted that capability. Not all is rosy with Li-Ion though. Misused they can be a bomb. The same high discharge rate and storage that makes them so good for high output lights means that they can be dangerous in the wrong hands.

Our backyard is thousands of wooded acres

Will you adopt me …dad?

I don’t own it. It just adjoins what we do own so I call it “my backyard”. Heck, it’s my neighbors back yard too and he has an unused bedroom.

It’s a rabbit hole. But a very well LIT one.
https://www.candlepowerforums.com/vb/content.php