Just a few minutes ago in another thread I wrote that I carry a cane. OK, I needed it far more a year ago than I do today, but I still carry it despite the stigma of what a cane represents. So why do it?

As I wrote a few minutes ago in that other thread it makes a pretty decent weapon. It also has the weight of the federal go’vermin behind the carrying of it. It cannot be taken away from you unless you have the brain power of an amoeba.

It’s carried to give one a 3rd leg for stability, correct? (Nod in an up and down motion.)

Carrying one has the endorsement of the ADA and unless one refers to it as a weapon (making it one) it retains the status of being that 3rd leg for balance. I don’t care if it’s clearly a fighting cane, as long as it isn’t referred to as a weapon it’s there for balance. The person who takes it away is in danger of a lawsuit and I guarantee I WILL find a way to fall if I don’t have mine at the ready. It can’t even be taken away when boarding a flight. “NO weapons allowed”? Just ignore those signs. It’s a cane and the ADA says you can have it. But refer to it as a weapon and it’s gone. Maybe it could be taken away in prison, but my goal is to stay out of them and never find out.

But it’s a cane until it’s no longer a cane. The wielder decides when that time has come either through words or actions.

So here I am no longer really needing it all the time, though sometimes I do if I’ve overdone the walking. How do I carry it until such time as the need arises? If I need my right hand I hook it over my left forearm if that hand is in use. Or It can be tucked under an arm in the armpit area, or just held in the hand to swing back and forth with my gait. That swinging stick makes sure people give me room if they’re paying attention. If not I bet they will be soon. Of course I’m all apologetic and then I return to carrying it in the same fashion because I’m fairly stupid, and old. They’re generally smarter and younger, they can look out for me, oh, and don’t crowd me. If we’re shopping I’m the wifes cart driver and the cane goes over the handle and hangs down to the floor or the meathook is resting on the handle and the shaft is slanted and inside the cart. It all depends on the size of the cart.

I don’t care if you’re in your 20s and as fit as a fiddle, if you say you need that cane it can’t be taken away. I walk fine until I need it. Then I need it. Maybe you do too? (Have I written that concept enough yet?)

Some things to look out for. A shillelagh is a cane with a bulbous end. It’s also illegal in some places, just beware if you’re traveling and cross state lines. But a cane with a meathook on the end is legal everywhere. Do a ‘net search for fighting canes. The hollow aluminum canes seen at the pharmacy? They’re OK for that 3rd leg but useless as a weapon. They have no mass. If people should lift my cane they always comment on the weight. No one has associated that weight with the intended use, or if they have they haven’t said anything about my 3rd leg for balance. I keep mine longer than normal for the reach, and they still work for me because when I need one I’m not moving anyway. If it wasn’t so bulky and difficult to manage I’d probably carry a 6’ long staff with a meathook. Some folks in the know about canes have mentioned that mine are too long. But again, I don’t use them when walking if I need then for the obvious use.

The heavier the cane the slower it is to swing and you don’t want to be slow or it can be taken and used on you. That wouldn’t be the best situation. Tractor Supply sells a plain one in the cattle section fairly inexpensively. My first out and out fighting cane was, and still is, a black nylon cane. It doesn’t see much use today. Nothing wrong with it but the weight. I can still wield it effectively, I just prefer something lighter and with notches on the shaft for a better hold. I located a cane with a meathook and notches online for $36(?) that should work fine should I need it. It’s lighter so I can swing it faster. Swung with force I have no doubt that it will break bone and that’s one way to use it. Never on the head; it’s just to break appendages and render them useless, it’s not to break the skull. There are plenty of videos on youtube that demonstrate other techniques.

The notches also serve another purpose other than to give a better grip. They are quite painful run across a shin. My black cane lacked the notches but it would be superior for breaking bone.

I find carrying the cane to be humorous in that I go to cardiac rehab at a hospital. I’m fairly young, strong, and spry, normally anyway, unless I push myself hard. There are much older folks there who actually need a cane far more than I do but do you think they’ll use one? NO. People might think they are old and in need of one if they use one, even though anyone with eyes can see that’s the case. Maybe it’s like a comb over to hide baldness. Maybe by not using one people will think they aren’t moving slowly like an old person despite what they see with their eyes? Heck, I even put my cane in my cart when I shoot competition, but at a match it’s really in the cart just in case of the walking and if I’m having a bad day with it, and not for use in case I run out of ammo during a stage.

@Tactical_Reviews can you weigh in?

I need a cane too, never leave home without it. 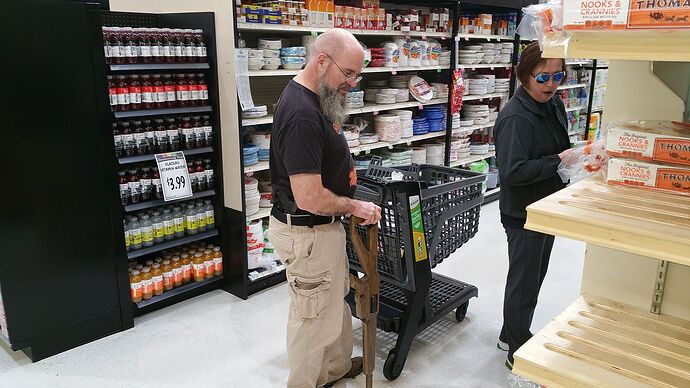 I don’t take much crap about it. Be sure to watch the video of the clown trying to get me to give it up.
https://tactical-reviews.com/usgunblog-com/f/look-out-he-has-a-cane

Even the secret service tried, and in this case failed. I did have to give it up one time at a Trump rally, they were very insistent.

Now, if I were forced to use my cane as a weapon, it’s not only heavy and hard, solid oak. There’s also the pistol grip. If I’m face to face with a belligerent person, I rotate the cane in my hand so the grip is facing away from me and is between the legs of the aggressor. If the need arises, such as he puts hands on me, I simply lift the cane up with a fast, and firm motion. Let’s just say that grip taint going to miss. That will drop anyone.

I do have another cane that is much lighter, but still packs a punch.

LOL, the first few you were likely going straight to the ground vs into your leg

No, the terminals are on each side, so I was only contacting one side. I turned the cane 90 degrees and that got me.

A cane was a symbol for the gentlemen types, there were even martial Arts using them as weapons. Bartitsu was made famous by Sherlock Holms but it was a very real martial art and many guys beat thugs down with canes…pretty weird how its a symbol of something else now

Theodore Roosevelt talked many times of stick fighting as a sport that was actually pretty much cane fighting too.

People have revived the martial arts of it even. This is choreography but they are pretty slick with canes. 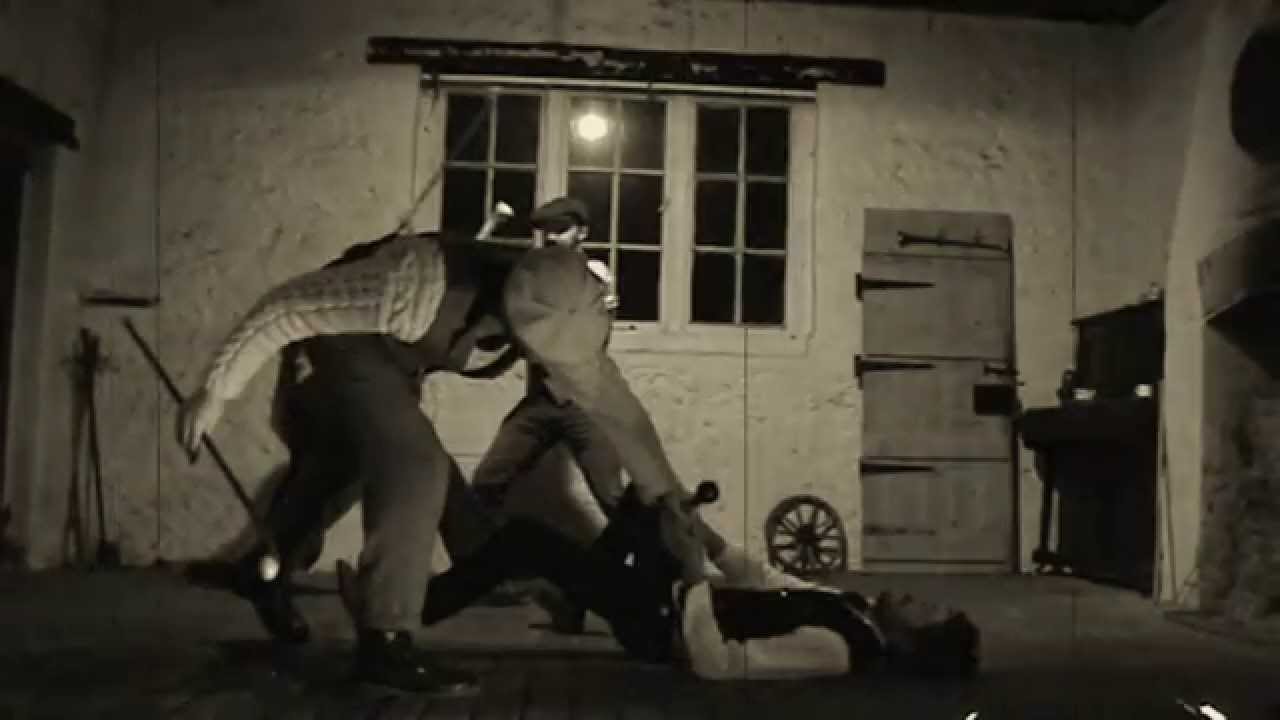 Moral of the story…Society is full of shitheads, beat them with your cane… Or get a sword cane

I’m pretty sure I saw a real rifle cane somewhere. Yup, I just did a 'net search and found them.

A shotgun cane would be cool too

It was a very different time.

What a neat cane.

tell them to F off, you don’t have to answer questions…they are not your friends…

Cold steel city stick for when my neck and back are acting up, it’s got some mileage on it works great as a cane, never thought about using it for self defense 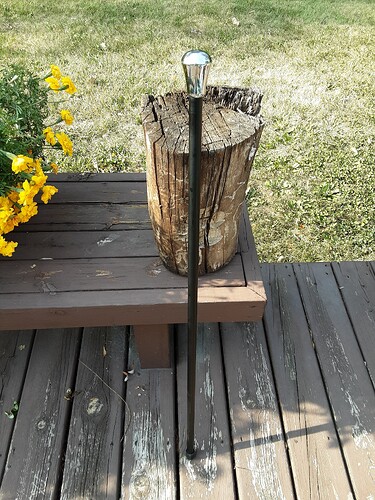 You city stickers and your fancy canes

Nice! Does it balance nice? Looks a little top heavy.

You city stickers and your fancy canes

Not everone can ride a lawn mower everywhere