Check before you buy

For a few laughs and something interesting to read I decided to post this based upon my own experiences.

I have had quite a few different firearms chambered for either wildcats or almost obsolete cartridges. For example, If you bought a rifle and it was listed as .308 you would safely assume .308 Winchester correct?
While that might be true of most guns, there are a few .308 wildcats.
The one I personally encountered was the .308 Norma Magnum. When a Federal Power-shok .308 Winchester is chambered, it will fit, but when fired, the case neck will be blown out against the chamber wall and pieces of the primer may or may not shoot backwards. The .308 Norma Magnum is just shy of being the same length as the .30-06 Springfield, with a different parent case.

Another case of mistaken identity is the .38 S&W. This is quite different from the .38 S&W Special (Also known as the .38 Special) in both case length and bullet diameter. the .38 S&W was a popular self defense cartridge in the late 1800’s and early 1900’s. The .38 S&W has a bullet diameter or .361" roughly, versus the 38 Special’s .357-.358" roughly. Why then would someone purchase this by mistake? Enter the Smith and Wesson Victory models. Most were part of the Lend-Lease program in WW2, the British empire had chosen to use the 38 S&W as the base cartridge, removing the original projectile and replacing it with a whopping 200 grain bullet. (.380-200). While most where originally chambered for this cartridge, some were produced for the U.S. Military and chambered in the now common 38 special. Some of the “British” revolvers had “converted” to use the 38 special, but with the differences in bullet diameter, the accuracy is simply none existent.

Let me know some of the stories you guys have come across and any feedback is much appreciated.

This is all very good information. Failure to understand the weapon you are using can have tragic consequences. Several years ago I picked up a 50 cal muzzle loader. After going on line and doing a lot of reading I found using it will a full charge resulted in a lot of failures of the weapon and it was strongly suggest it be loaded lighter. Always educate yourself on all firearms you own.

I have seen the .308 in a 30-06 chamber. The case comes out looking like a straight wall case. Older gentleman not paying attention.

Never had an issue but I realized i needed to look close at my 9mm stuff when I got the little Makarov. Its a round of its own. The Mak is a tiny bit shorter so i have to make sure no Luger rounds get mixed in. Don’t know if they will actually chamber and i don’t want to find out.

Another thing that needs to be watched close is 300 blackout going in to a 5.56 It will chamber right in, but won’t work so good when you pull the trigger.

Nope it won’t. The shooter will never forget to check his ammo either after the sides of his AR15 blow off due to over pressure. 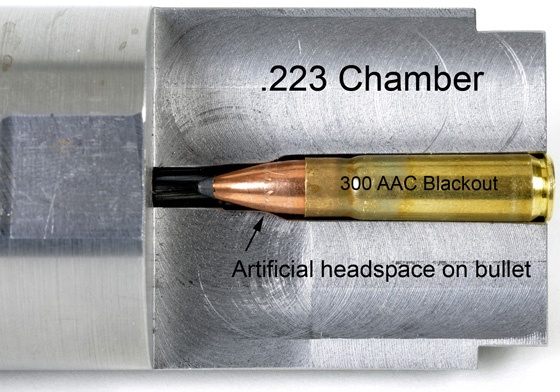 Geez the cringe factor is high just looking at that picture!

Having worked in a small town gun shop years ago, this thread brings back a lot of interesting memories lol. A 45LC revolver that had “reliability issues” with 45ACP ammo…ya don’t say! A 30-06 round crushed into a 270 that “seemed too tight” but they beat on it until it closed anyway, bringing it loaded into the shop once it got too stuck to open… never knew what was walking through the door next! Interested to hear everyone’s stories!

I would help out in a local gun shop on the day before deer season opened. People would drag every old gun they could find in wanting ammo. We had people with 6.5 carcanos trying to buy 6.5 jap or 6.5 rem mag.or 7mm mag for a 7.7 jap