I’ve used a lot of ProMags and never had a problem. I just picked up a couple 40 rd mags the other day. First time i loaded one, it cracked on the last round loaded. Apparently, these aren’t robust enough to withstand the extra spring pressure of a 40 rd mag. 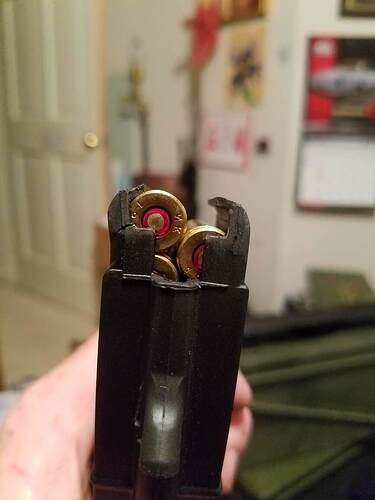 Ouch. I’ve used and tested several ProMags, no problems with any.

Me too. I have a crapload of 20 and 30 round mags for several different rifles. Me thinks 30 is the limit on those.

I bet they send you a new one no problem.

They probably would. However, I don’t trust the 40 rd mag now. It was pretty tough getting that last 5 rounds in there. I guess, if you only put 35 in them, they would be reliable

It may just be a bad mag. Did you load the other one?

Certainly possible. I havent tried to load the other one yet. I bought them from Cheaper Than Dirt. I sent them an email so, I’ll see what they say first. I dont want to be “that guy” that breaks two mags in a row. Lol

Probably my drag racing paranoia but… if it fails before you even get a test and tune, its permanently compromised.

They probably would. However, I don’t trust the 40 rd mag now. It was pretty tough getting that last 5 rounds in there. I guess, if you only put 35 in them, they would be reliable

Our 40rd pmag works flawlessly. We have no trouble loading all 40.

I’ve only tried their 8/15 rnd mags for 1911’s. Fed ok, slide didn’t always lock back. Had to modify bases to fit in all my pistols as well. Price is cheap but so is their quality in my opinion, so I stick with Wilson combat mags.

Who makes the 60 rnd mags, magpul?

I would look up reviews and test at leasta few more but thats just me. A sample size of 1 or 2 dosnt say much. Also, be careful with cheaper then dirt, there is chinese counterfeit stuff sold on there. Ive got a fake magpul grip around here somewhere.

I’ve seen just about every issue a mag can have from their stuff. Breaking, feed issues, lock back failures, etc. There are so many better options out there at very competitive price points

What do you use?

Mainly Pmags. I have a ton of 30 rounders, a 10rnd, a 40rnd, and a 30rnd with a Nordic +18 extension, and they all have never skipped a beat. Also, although they don’t load/unload as smoothly, standard aluminum 20/30 round mags (colt, brownells, OKAY, etc) are awesome as long as they have the anti-tilt follower. I have 2 Lancer mags too which have held up very well for me. For AK mags, the only polymer ones I care for are the Pmags, and honestly had great success with the old TAPCO mags when I had them. Otherwise, most surplus steel AK mags work just fine. I’ve heard mixed reviews from the Bulgarian polymer AK mags too. I had one years ago as I remember, but didn’t use it all that much.