Da Hogg is at it again

When is this pimple going to burst?

The Children are being coached in things to say by aligning with far left direction. They appear to be like the kid next door as a way of capturing the attention of unfamiliar folks for the Advertising of the left.

He desires more attention, he should find a girlfriend.

He desires more attention, he should find a girlfriend

When will this planted shit stain of a human go away from the public eye. His 15 minutes of fame is long been cashed in.

Roughly 60% of the annual firearm related deaths are suicides. This means that they could easily reduce ‘gun deaths’ by more than 50%, just by getting people to quit committing suicide. Since Japan has a worse suicide problem than the US, and Japan keeps getting held up as an ideal example of how gun control can nearly eliminate ‘gun deaths’, eliminating guns will not stop people from committing suicide (gun control is not the answer).

Instead of taking another look at Heller, maybe they should take another look at Miller. In Miller, the US Supreme Court ruled that the 1934 National Firearms Act could be applied to Miller’s gun - a short barreled shotgun - because the Court was unaware of any militia use for a short barreled shotgun. Rather than holding the position that the 2nd amendment only protected the right of states to have a militia, as the gun control lobby falsely claimed for decades, the Court was holding the position that the 2nd amendment protected an individual right to own military arms (or “weapons of war”, as the left seems to refer to them), but did not protect ownership of guns that had no current military use. If Miller’s case had been about a Browning BAR or a tripod mounted Browning machinegun (which were also regulated by the NFA), the Court’s stated position on the 2nd amendment would have resulted in a ruling against the National Firearms Act, instead of a ruling upholding it.

Interesting, I did not know that.

There’s a lot of misunderstanding of the US Supreme Court ruling on Miller, because the gun control lobby spent decades presenting a one page summary of the ruling, as the actual ruling.

Nobody presented evidence of a short barreled shotgun having a military use (such as being used as a trench gun in WW1), because Miller had died while waiting for his case to be argued in front of the Supreme Court. The Court had already agreed to hear the case, so they were just going through the motions of hearing the government’s lawyer present their side of the case, with nobody to present Miller’s side of the case.

Roughly 60% of the annual firearm related deaths are suicides.

That’s a fact that the far left carefully leaves out. If you include suicides, self/home defense, law enforcement, gang / drug crime the ACTUAL number of mass murder events where people died with being shot by a rifle is so low it isn’t even double digits.

I’ll do one better, here’s a link. I’m trying to find the larger better spreadsheet that breaks this down further and has “mass shootings” listed.

Here’s a crude quick pivot chart I made that sits on top of the stats. Look at the sniper attacks…and yet the anti-2A jackholes think “sniper rifles” are a public danger. And one of those two “sniper” attacks was showing with a handgun. So in reality “sniper attacks” just don’t fucking exist.

Plus, really, just watch the video. It’s from 2016 BUT it is still relevant on how the far left / anti-2A people twist the information. 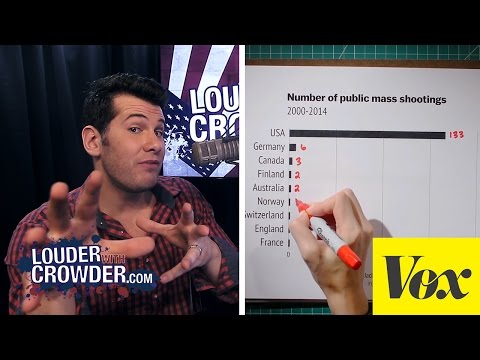 Lott’s study that the gungrabbers discount because he uses all the numbers and than breaks it down. but here is a prime example of raw numbers

If the pukes name has to be used at least spell it wrong so he doesn’t get credit for the clicks! Why does society continue to make idiots famous…

Why does society continue to make idiots famous

Because society is made up of idiots that want to support their fellow idiots…or at lesst thats what im going with.

Problem is the gun community gives him more click value than the left. We are the idiots in that case. Any publicity is good publicity, our own side uses him for fundraising. Ignore anything to do with him and we would be better off. We need to stop focusing on personalities and stick to facts.

Problem is the gun community gives him more click value than the left. Ignore anything to do with him and we would be better off.

I agree. The constant criticism from the gun community is elevating his status with the liberal MSM. He would be long forgotten by now (like the other student activists), but we are keeping him in the news cycle.