I had forgotten chigger season starts around mid-to-late May here in Texas. And sure enough, my oldest boy and I just got jumped by a bunch of them on some grassy field. My youngest boy and my wife were lucky and came out unscathed, luckily for them. So looks like my oldest inherited my chigger magnet genes, because I seem to attract them most summers.

One or two chigger bites aren’t bad at all, but it sure gets annoying when you get a bunch. I found that if I shower immediately after being out in a field the little buggers don’t get a chance to cause much damage. But once the itchy little welts show up, a hot bath and a good scrubbing with a chlorox-soaked rag provides some temporary relief. The “Chigarrid” stuff and nail polish trick never really worked for me, though. The good thing is that the itch only lasts a few days, unlike poison ivy which can last a few weeks. But once the itch goes away, I tend to get into another batch of the little demons! Deep Off generally works - but only when I remember to apply it - and even then I still manage to get one or two that don’t seem to care about the repellant.

Anyone else a chigger magnet?

Not chiggers, I’ve heard of them, but never encountered them that I’m aware of. It’s mosquitos that love me and they’re just starting in Maine. But we’ve had ticks and blackflies for the past month or so. I took 4 ticks off of me just today and when I got inside the wife took one off of my back that had begun drilling in, so it had been there for a few hours. I hate ticks more than any other parasite but there’s no discomfort associated with them, other than Lyme disease. Blackflies? Lots of times they aren’t felt as they drink blood (the same with ticks) but they itch for days afterward and that’s if one is lucky. The unlucky swell up. What gets rid of them? Ticks need moisture where they live, so dry hot conditions kill them. Blackflies don’t like heat and since they hatch from the water once it gets out of their “hatching temperature zone” they stop. Then when the water cools down in the autumn they start in for a second try at us.

Even with all the camping i used to do i never got chiggers and rarely a tick. Everyone else would be covered with chigger bites that showed for a very very long time.
I’d do a quick dusting of some sulfur in a sock by my feet an call it good. I didn’t know why it didn’t work for everyone else.

Yeah, I hate mosquitoes, too, but their itch isn’t as tortuous as chiggers. I hate mosquitoes the most when their whiny flying noise wakes me up at night. I’ve never had a tick that I know of, nor have I ever gotten bit by Blackflies. Are those the same as those big, black horseflies?

I have gotten bit by Deerflies (also called Yellowflies) when I lived near the swamps and bayous of southern Mississippi. The Deerflies would attack in swarms sometimes and chase us. They also tend to bite on the face and neck, usually the temples of the head for some reason. Nothing like 10 or so Deerfly circling your head like sharks getting ready for the kill. They don’t sting or hurt as bad as a bee, just a slightly painful, but very annoying, bite. Luckily, I’ve never seen any in this part of Texas. Not sure what I hate more - Deerfly or chiggers.

And I thought the really freezing cold spell we had in Texas this past February would’ve killed most of them, but I guess that didn’t happen. Come to think of it, I don’t quite understand how ticks and mosquitoes survive the cold winters up in Maine. I’ve lived in hot humid climates like Puerto Rico, Florida, southern Mississippi and Texas where mosquitoes and most other biting bugs thrive. How the heck do those bloodsuckers survive the freezng cold up there?

I will say when it gets past 100 degrees in Texas in late July and August, the chiggers and mosquitoes tend to lay off. That’s the best time for me to then hit the gun range with a few supersized iced teas to stay hydrated.

Interesting you should say you don’t get bit by chiggers. I think you’re one of the lucky few who isn’t allergic to the enzymes they use to digest skin cells.

Grandpa kept a salt shaker in the glove box full of sulfur. A sprinkle on the pants cuffs before a trip to the woods or fields . Haven’t gotten any chigger bites in a long time.

Mosquitos love me. Mark rarely gets bit and when he does nothing happens. Me? I get giant hive-like welts that itch like a mother for weeks. When I go out in the summer, I have deep woods off on for sure.

I remember the chiggers, ticks, and deer flies when I lived down south. Those are no fun either.

I hate deer flies. I seen a couple in the bol in MS, but where i got bit the most was when we went to the beach on the coast.

Haven’t seen any ticks until this year and have seen I’d say 6 in the last week, not impressed,

Thought of letting the chickens roam/eat them but then the roaster, who does roam, will make egg collecting more of a hassle, I prefer not to deal with

I am a tick magnet, 10 people can walk across a yard and I will be the one that gets the ticks, now black flies are a whole other thing, I’m allergic to them and they love me. The breed in clean running water and I live a couple of hundred yards from the river in the one town in Maine that holds a black fly festival. One bite and I swell up for days, thankfully they don’t last too long.

Are those the same as those big, black horseflies?

No, blackflies are fairly small, maybe 1/8" long. As Joe stated they live in water. Then they emerge and look for anything with blood. Unlike a mosquito that has a needle for a sucker blackflies have mouth parts like knives. They slash and drink what comes out.

We have horseflies too, but not many.

This thread prompted me to do some research into ticks. I knew that they like to latch onto small mammals like mice and chipmunks and such, and that’s where they’re vulnerable unless one wants to spray the backyard and kill ALL the insects including beneficial ones.

I’m not going to go into details here, but do a search for “tick tubes”. They can be purchased but they can also be made from TP and paper towel tubes. I suppose PVC pipe also, but the cardboard tubes will breakdown.

Traps can be made for deer flies too. They’re attracted to dark things and that’s the key to their demise. A 'net search should turn up designs for deerfly traps. 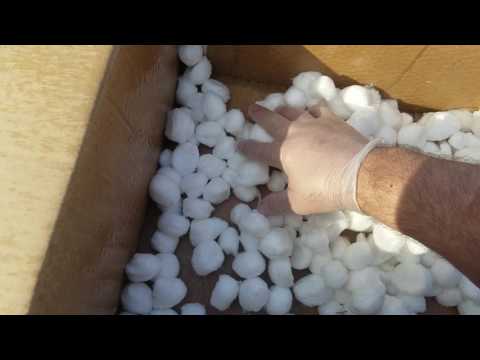 I learned something a few years ago about these nasty little bastards. What the welt is caused by is that a mite lay its eggs on your skin. Somehow the larva wind up in your skin and that caused the welt and the itching. I had always used cortisone cream to mitigate itching and was using it on the chiggers. It never really did much to help. Then I got to thinking. Putting a steroid on a larva is only making it stronger. Duh! So I tried something else and was really surprised at how well it worked. I put Dr.Tichenor’s on a cotton ball and really held it on the welt for a while to let it soak in really well. Instead of the bastards lasting two weeks, in two days they were gone. One of the happiest findings I’ve ever experienced.