Number 9 in this essay was posted on another platform. I found the original essay and thought it worth sharing.
This essay is addressed to LEOs and FLEAs and anyone else who may show up at our door to strong-arm us on the governments behalf.

It appears that LEOs don’t have a problem now with storming one house and disarming one person. With the implementation of more red flag laws and more unconstitutional gun control laws the LEOs will continue this, one by one. As that ONE person will appear to be a special circumstance that needs to be dealt with.

I wonder if there’s a certain number of people that need to be dealt with all at once before the LEOs finally put their foot down and decide to not to carry out orders. What number would that be? 20 people need to be taken down? A whole community? A town? What’s the magic number that will wake up the LEOs and make them see that it’s their neighbors, family and friends who are the targets?

as stated above, on a case-by-case individual basis, they can effectively “do their job”. In my opinion though, for a mass scale confiscation , the agencies & any local police DO NOT have the Manpower! I also believe there will be some defectors. Without the help of the military, or some outside military, they stand no chance in hell! Look at the amount of law enforcement deployed for small incidence within cities limits. They have trouble containing and controlling just a hundred people or so if crowds
get Rowdy or riot. Granted, Leo’s are restrained in their abilities to go on the offensive so far in these instances. But even in a “no holds barred” response, they are way out manned & outgunned!

I have several agencies (city, parish, & state police, National Guard, Marine Reserves, DEA, and ATF as customers. I’ve asked them all about this senario. They have all said that they are on the side of the citizens and would not participate in any action to confiscate weapons. I hope that sentiment is wide spread.

If police swear an oath, are they swearing to uphold the State Constitution? U. S. Constitution? or the States’ or cities’ laws? Or all of the above? I can see where the laws and the Constitututions are conflicting and will be even more so with additional gun control laws being passed. I think currently the LEOs don’t give Constitutions a single thought. They are too busy upholding these damn laws. Politicians have succeeded in making the Constitutions obsolete by passing laws that conflict with them. They appear to not even take the Constitutions into consideraton as they continually micromanage and super-regulate American citizens.

I tend to agree with John Lock’s philosophy on natural rights.

According to Locke there are three natural rights:

I don’t need a U.S. Constitution and Bill of Rights to give me what I already have. So whether the 2nd Amendment gets removed or amended, it doesn’t change anything for me. Hell, it’s barely doing anything to protect us now, and yet we keep fighting to keep it. Even with its existance, laws get passed.

At some point, we will have to change our focus and let the Second Amendment just fall, and instead of using all our efforts to try and save it, we focus on showing our government that we don’t need it anyway. We have a right to defend our selves by any means necessary, with any weapon we choose. WE are supposed to be free people. Our government has gone way past the point of where the Constitution and its founders would have defined it as tyrannical.

OK, I’m rambling now and sort of off topic.

This is the oath officers take in Pennsylvania 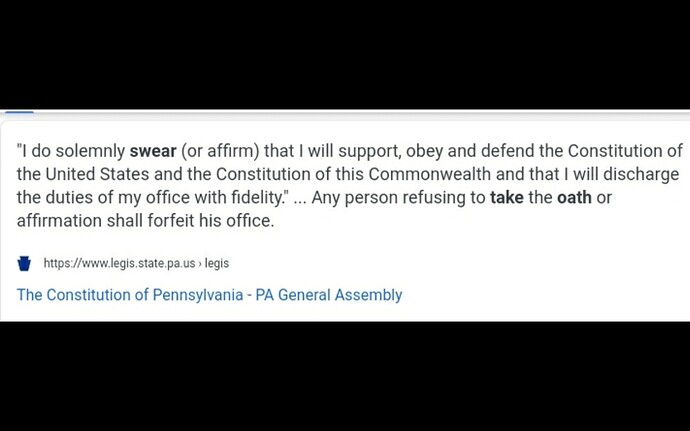 Are there no active LEOs on this forum?

Here is my issue also, notice what I have highlighted in blue, it says they are to uphold the Constitution and ordinancesset by the city of Pittsburgh which may obviously differ & violate the Federal & State constitution! Some of the laws in effect right now via the mayor of Pittsburgh are unconstitutional! Whereas they want AR-15 and like weapons prohibited in the city which violates Second Amendment 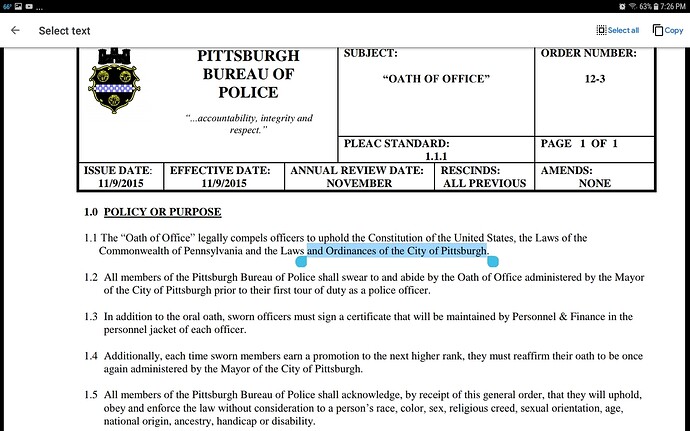 I don’t see how anyone can even take such an oath. I guess none of the officers have raised questions about that.

Not all, but most are taking the oath for a paycheck, the actual words in the oath mean nothing to them! But there are a few good ones, Great ones, and take it to the letter…

They have all said that they are on the side of the citizens and would not participate in any action to confiscate weapons. I hope that sentiment is wide spread.

We the people better hope that is the case. Sadly I am not as optimistic.