Democrats are deceiving you - JPFO

Contact your congressman today and stop H.R. 1296 Bullet'n Board

Time is almost up. and lack of motivation will empower the lefties. Please take a moment to contact 202-224-3121 is a switchboard that will connect you to your representatives so you can verbally appose this H.R.1296. It only takes 1 minute of your life. Do it please. Before you call do the following things. (because you will go to VM instantly sometimes) Write down what you want to say if you don’t know. Be polite and firm. Remind them that you vote. If they are doing a good job tell th…

People The modified Assault Weapons Ban is on a roll. This was a failure before and will be again. This time they want to tax the legal owner of any firearm that has a detachable magazine. The NRA argues such a policy would turn the Second Amendment into a privilege and would give the federal government a defacto means to block gun sales, pointing to the fact that in some circumstances the check may be in a limbo between a delay and timing out as NICS checks are only good for a 30 calendar day…

but can’t be repeated too much

Few groups have the guts to make this announcement.

No democrat has spoken out against the bold, explicit demand to confiscate guns.

They stand in favor of it, with silent approval and lack of complaint.

This is what they plan if they gain power, no more mincing words.

They show no fear of armed revolt.

FROM THE WARNING IN THE DECLARATION OF INDEPENDENCE:

"evinces a design to reduce them to despotism"

Democrats have "come out of the closet,"

cheering to disarm the public.

This is no false alarm or hype. A significant portion of our own political establishment is calling for disarmament of our own citizenry, while remaining heavily armed itself. Seeking to incrementally or completely disarm the public is tyranny–the very acts that led to revolt against the British Empire. The bill Democrats want (H.R.1296) seeks to ban guns with grips --it is called but isn’t some sort of “assault-weapon” act. Democrats are deceiving you – and the media – which hasn’t read the bill.

Politicians and their minions who press ahead with this agenda are encouraging a deadly response they should never want to face. Those people should be removed from office or candidacy by legal means before matters get worse, while time remains. Gun confiscation is a bright red line. H.R.1296 bans guns with grips , not “assault” something. Assault is an illegal behavior, not a gun type.

Democrats cannot legally do what they are proposing, it is infringement, which is banned. Leaders of that party must object to the proposed confiscations, but they have not. Confiscation is an obvious overt violation of law and human and civil rights. Any pretense at gaining office by swearing an oath to preserve, protect and defend the Constitution, while adhering to such outrageous policies is preposterous and subversive.

Jews for the Preservation of Firearms Ownership calls for immediate censure of Robert “Beto” O’Rourke by Congress, for insisting that if elected he would take guns from Americans, a blatantly illegal act. We call for an immediate and unequivocal renunciation of that position by every politician seeking office, unless they come out and publicly demand repeals of The U.S. Bill of Rights. Do not be cowards–face us and admit where you stand.

Donate to JPFO to support our important work and defend your right to keep and bear arms, against the onslaught of forces aligned against this great American right. JPFO tells it straight. https://store.jpfo.org/11-donations 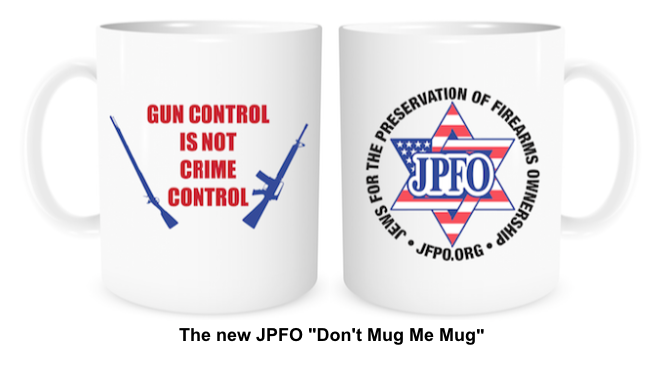 Inexpensive. Works with whiskey too.

“Jews for the Preservation of Firearms Ownership, http://www.jpfo.org is America’s most aggressive civil-rights organization, dedicated to destroying the notion of ‘gun control’ as any kind of credible public-policy position. So-called ‘gun control’ does not control guns and doesn’t control criminal behavior. What it does is disarm the innocent, leaving them helpless in the face of criminals, tyrannical governments and genocide. History repeatedly proves this fact. Founded in 1989 by Aaron Zelman as a response to the Holocaust, JPFO speaks with the moral authority and tenacious commitment of survivors of persecution, and knows that surrendering your personal and family safety to government protection courts disaster. You don’t have to be Jewish to fight by our side, you just have to love liberty.”

JPFO has been on our donation list a long time here
I approve this message.

I’m reading 1292 and I don’t see a tax for having guns. I see a ban on semi autos like the ban on full autos in the 80’s. It has a grandfather clause. Doesn’t mean I like it though. I called.

Jews for the Preservation of Firearms Ownership calls for immediate censure of Robert “Beto” O’Rourke by Congress, for insisting that if elected he would take guns from Americans, a blatantly illegal act.

Really? Let him keep flapping his gums. It’s his right after all. Plus he just keeps showing what a blithering idiot he is.