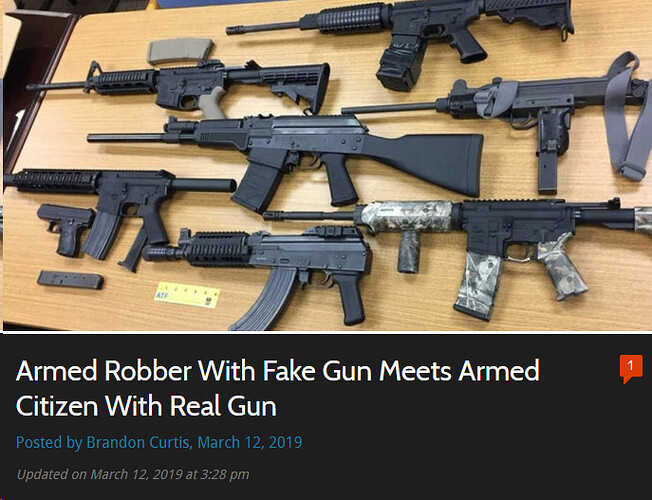 EVERETT, WASHINGTON — During what authorities believe to be a meetup organized online to sell an iPhone, things went south for both parties involved when one of them pulled out a gun to try and rob the other.

The gun displayed was fake, and that suspect didn’t know that his intended victim was carrying a real gun.

“Initial reports indicate that the two men had arranged to meet so that one could sell the other an iPhone,” according to a news release. “During the interaction, the intended buyer allegedly pulled a fake gun and attempted to rob the seller. The seller responded by pulling a real gun and shooting the other man several times.”

The suspect was taken to the hospital, and is likely still there, in critical condition.

A deadly threat is deemed a deadly threat if you believe that your life is in danger. Fake gun or not, it’s nearly impossible to tell the difference, especially in the heat of the moment. Drawing your own firearm, and pulling the trigger, is likely justified.

Even if it is determined that the firearm was fake in the aftermath, that doesn’t change the perceived deadly threat when things were going down. This is something that the bad guys need to take into consideration, and they should never be surprised if they are shot while bringing a fake gun to a real gun fight.

Would hope the crazy Washington folks and their copy of Oregon legislation would not demonize the use of firearm for self defense. It is not required for anyone, including Police Officers, to determine if the assault is with fake gun before defending themselves. Just sayin’

Washington what a shame that state went down hill fast.

I am headed back to Washington to help straighten it out…

Permanently? Why not Idaho instead? They’re still free there.

@Chuparosa until the Left Coasters ruin Washington then realize the taxes are to high and the state is now a shithole (due to their policies) then migrate again. Like locusts.

It’s really a shame because almost every state the CA left scourge migrates too that we/I like was a great place. CO, NM, WA, OR, TX and now NV, MT, ID and AZ.

My family is there and despite the people, I love the country.