In all the years I lived in Fl and all the time I spent fishing and all the gators I messed with I have never seen this. The guy is an idiot though if that gator wanted him, it would have had him.

Occurred on May 8, 2021 / Everglades, Florida, USA : 22-year-old Florida native. My name is Tommy Lee. YouTube is chumdumpster. Ig is heavychummer. I was tarpon fishing at sunrise when an 11 foot plus bull gator stalked me then chased me. The camera...

About as stupid as this idiot. 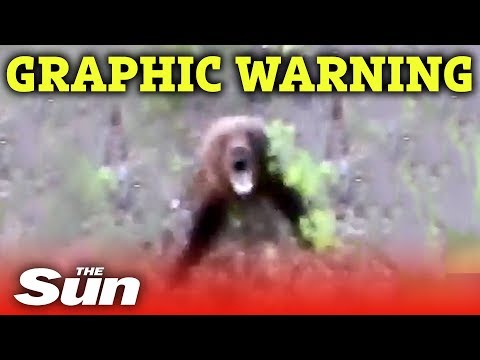 Idiot had to be a liberal, he attack the bear first then accused it of of attacking him.

Yeah, I noticed that.

He is just lucky - not sure I would go around kicking a young griz.
probably a good thing he stuck his hand in the bear’s mouth otherwise those teeth would have been in his face.

I’m not scared to swim around gators, but you can’t be an idiot and try to play tag.

So the gator fisherman played him ok, but didn’t put it on his stringer. Marks off for catch and release.

Then the bear baiter just forgot to go to pieces to better feed the bear. What a moron.

The guy is an idiot though

You should have seen my Yankee ass the first up close encounter I had with a gator. Went to a pond south of Ft. Stewart with some Ranger buddies on one of those rare days off. There was a five footer right on the edge of the water sunning himself with mouth wide open. I started bouncing small rocks and dirt clods off him but he didn’t even bat an eye. I got braver and braver till I was about ten foot away and chucked a dirt clod down his throat, I had no idea those things were that fast, it was like an explosion! I barely beat him to a nearby picnic table but then had to take a long leap to the hood of my buddies car when he got his snout on the table. Of course I took a rash of shit from my buddies, Rangers don’t run away… most times.

Yeah, that’s why I said he was an idiot. Going back down that narrow path with the gator still there and tell it to go away, those things can run up to 35MPH and it was already raised up, if it had come for him, he was done.

About as bad as on the news last night. A “pet” tiger was roaming a Houston neighborhood. Showed a guy petting the damn thing. I’d have a new rug if I saw a tiger in the yard.

Yup. In a heartbeat.

It sorta reminds me of the time I had a moose permit so we went moose scouting before opening day. We saw a big bull at maybe 50 yards. I stopped the truck and got out to approach it. I got to within maybe 30 yards and it turned to me and started to advance. I decided it was a lot bigger than I was, it knew that it was totally in control, so I backed off and drove away. It’s unnerving when confronted by something wild that knows it’s in charge and is willing to confront us. We’re just not accustomed to that.

Ah yes – shoot the tiger, and then celebrate by going to Ikea to buy a new area rug. I too have dreamt of such a trophy!