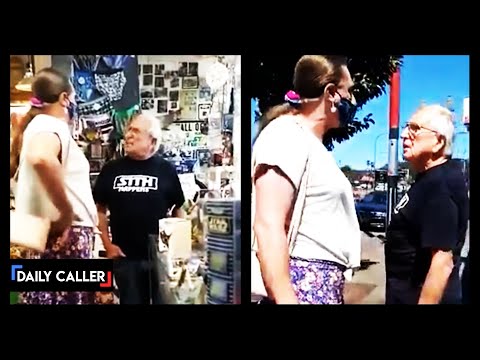 I used this video to insult someone on another forum, thank you for the ammo.

So much going on now my give a damn is busted. I would be live and let live but now I’m more like it shouldn’t remain in the gene pool.

I am fairly liberal in some ways more conservative in others , I have no issue with gay rights or whatever but at the same time people should have the right to disagree. We should be able to politely disagree instead of just hollering “bigot” whenever someone disagrees.

It ain’t like we are advocating throwing em of roofs. Until we get school choice I guess my G kids’ll be getting home schooled…

If they keep pushing their perversion …

They won’t stop. But honest elections and school choice and they’ll be singing a different tune, while we’re singing ‘The Battle Hymn of The Republic’.

while we’re singing ‘The Battle Hymn of The Republic’.

That was too funny! The dude in drag or whatever they call it looked like a guy. The older gent is absolutely correct. There are a lot of mentally ill people walking around today.

You’re right, some might still take it that way, so they can sing Dixie too

Probably because of my father, uncles, grandfathers and great grandfathers who served. For me it is an American Patriot Hymn, where God is in action, fighting with his faithful, his cause is ours, liberty and righteousness. My Paternal Grandfather served in WWl in a Kentucky Unit whose families had fought on both sides as did ours. His unit was nearly completely wiped out. It was one of his favorite songs because it was a song they sang in France and I think reminded him of lost friends. We sang it in church when I was a boy and I could see it really affected him.

Toward the end of the 19th and start of the 20th century it actually became popular in the deep south too, I think because they had also fought for God and freedom. BTW, the University of Georgia even adopted the “Battle Hymn” as its anthem in the 1890s.

It is sort of a American National Religious Anthem. In a way it defines and separates us from the other countries of the world. For me its about the American experience on the world stage, no other country has fought for the liberty of others as we have. Ever.

Yankee or Reb, we Patriot Americans have, and still do sing it. Commie traitors of God and the Republic do not.

Yep that’ll happen. It will continue to happen. People do stupid stuff on a regular basis. As their policies fail, and the people start to see what is really going on, I think change will come, but only if elections are honest, and we can take our children and their education dollars down the road.

Doesn’t mean he gets to be a government bully in a dress. What ever he thinks he is.

I don’t think we have lost the war. We will if we quit the field. Faith, and resolve from understanding that winning is the only option for civilization to preserve liberty.

If we don’t believe as the Founders did, that what we do changes the world for our great-grandchildren and their children, then we are done. There is no other battle than the one before us. It is a constant. Us leaving it to others is what the enemies of Liberty and the Republic count on.

I read to the end of the Bible. We win.