Rumor has it, I was the first outside the factory to shoot the new Trailblazer Pivot 9mm carbine. I really liked this thing from what I seen at SHOT Show and after shooting it, like it even more. It is just all around cool and it shoots good too.

While attending the 2022 Shooting Sports Showcase we had the opportunity to visit with our friends at Trailblazer Firearms and be one of the first... 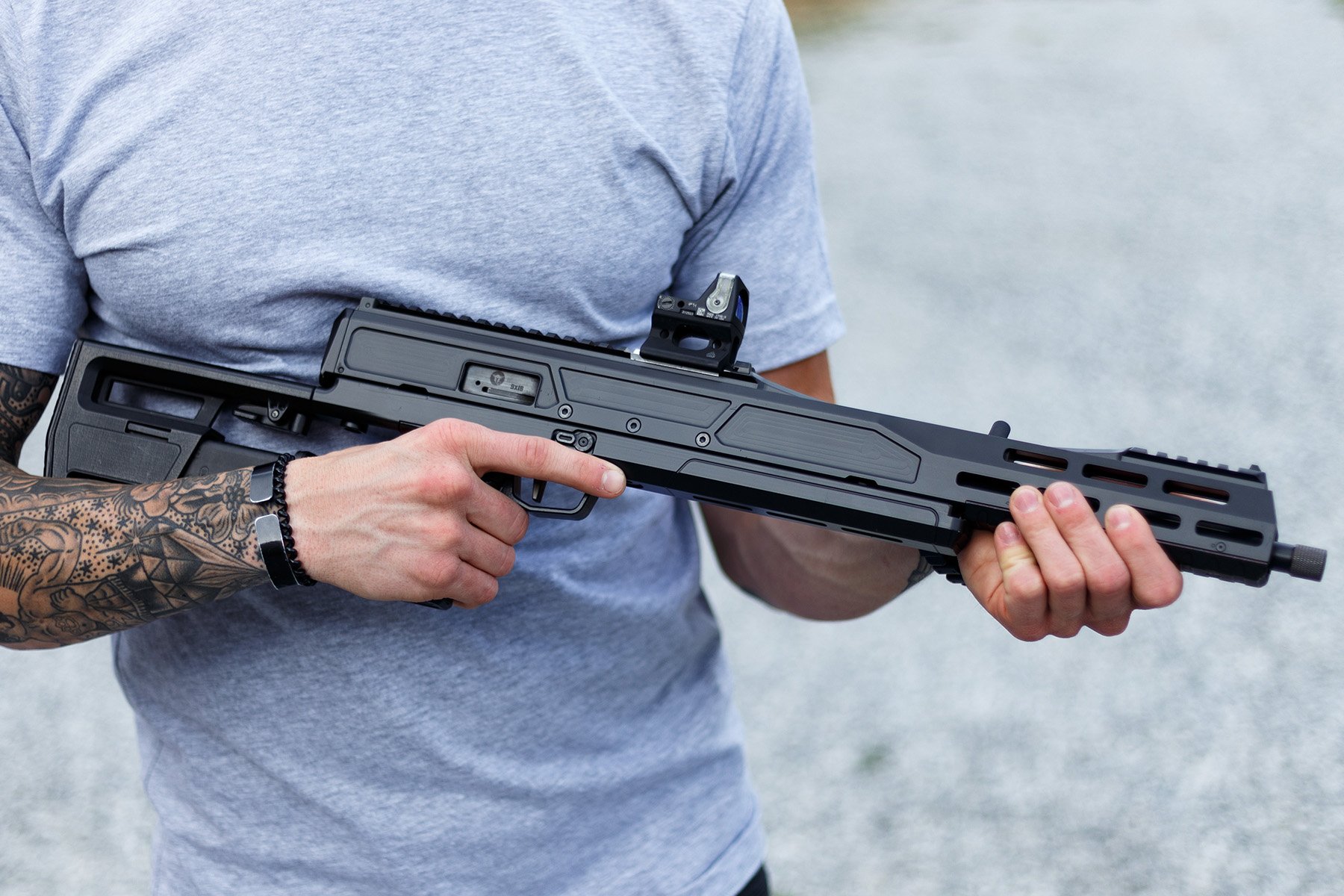 eh, kel tec ain’t all metal but yeah i guess if you like kel tec. i have a sub 2k and it doesn’t hold a candle to this in any way shape or form… not a fair comparison at all in my opinion but hey, different strokes for diferent folks i guess, nothing wrong with that

That’s fine. I consider guns tools. There are different tools for different jobs. I don’t own a keltec any more because I built an AR pistol in 9mm that fits in the same case and I don’t have to unfold it to use it. There are people who have to have one of these I’m just not one.

i hear ya… i don’t own a 9mm AR myself, yet anyway. i am sure it is in the cards eventually.

I have no doubt that you accurately reviewed the Pivot. I’ve known of it’s existence for awhile and pondered the why of it, then gave up. I saw no need for it. But my issue is also cost. I’m also not arguing with you, I’m just raising issues for discussion.

My KT sub2k has many thousands of rounds through it over a period of years and as long as I fed it what it wants, brass cased ammo, it never malfunctioned once in competition. Not once. So why do I need a $1500 folder? This coming from a gent who retired the sub2k and went to a much more costly Swiss SBR. But still, convince the new guy to PCCs to pay $1500 for something that works no better than a $1000 sub2k with a red dot sight. I know you’re not selling them, but I think the manufacturer has an uphill battle, that’s my point. At least that’s how I see it. I don’t see the sub2k or the Pivot as being militarily rugged and I wouldn’t use either to butt stroke anyone.

It’s different but is being different enough to justify the $1500 price? Maybe for a collector. But for a user?

depends on if it fits the requirents someone might need. as i said above, which maybe you did not read, i too own the sub 2k and the two are worlds apart in almost every aspect. maybe this isn’t for the new guy and that is ok too. i get the money angle but let’s be honest, there is probalby something YOU own that I would never pay that much for right? so yeah, as has been said here, to each their own. the same “battle” argument was used with the lifecard and yet the company is still rolling. keep in mind htat there are a ton of firearms in the $1K plus range, are most of them worth it? agian that is debatable but they sell, people do buy em. the cool thing is, i am not here to convince anyone to buy anything…i simply say hey check this out, it is an option, it is cool, here is what it does. if what i put out helps you make a decision, great, that means i was a resource which is the point. maybe you confuse me with every other guntuber on the planet

I think its interesting, at 1500 I would be pissed if I had to use it. Use and lose it. To me advantage Poly-gun. They are only disposable tools. Metal? You can fall in love with it. You can pass it on, see your great grandchildren holding it.

It’s why I EDC a drastic plastic 40, and the briefcase has a 100% reliable and accurate sub2k. Albeit they are somewhat improved, though even with a bunch of fully loaded mags neither is a $1000.

The metal heirlooms stay safely under water right where they belong …

I will say this if I was in a different tax bracket then I would be interested.

yeah, fair… think most people view videos with a mind biased towards themselves in one way or another instead of an open mind that there are all sorts of people in the country, with all sorts of likes in all sorts of tax brackets.

i don’t see poly as disposable, i mean Nylon 66 anyone? i own several and they are runnign fine, so will you tell me the tech on poly hasn’t improved. the thing that most people don;t get with price is, metal is more expensive, machined as oppose to cast is more expensive, hands on time, care, great fit and QC is expensive and obviously new things tend to be more expensive until the quantity going out can help lower the price a bit. i say expensive as compared to other things.

WHERE are my LIFE LONG firearm owners at? WHERE are those who know their firearm HISTORY? These same exact arguments have been made over and over an over gain every single time something “new” comes along.It is normal, it is natural and it does not stop new things from coming, and some, from eventually dominating. Who would have thought 6.5 creed would have overtaken 308? and that is just a recent example. there were people who didn;t understand the need for the cartridge, for smokeless powder, for semi autos. there were people who complained when law enforcement went to Glocks instead of revolvers or the old gen S&Ws. and yes, there were people back in the day that could not afford snake guns and kick themselves now days becuaes back then they thought they were too high priced. just wanted to stop the thread for a second to day… nothing new here, really isn’t if you think about it.

i don’t see poly as disposable,

It is more that I see EDC as ‘tools that are disposable’. As you mentioned metal costs more, so Poly becomes the choice based on cost. Make no mistake, it is unlikely you will ever see a weapon used in a fatal justified shooting for years, if ever again. I just don’t see a reason to buy a Pivot or a Sub2K for any other purpose but as a EDC Briefcase/Packpack piece. My setup for EDC cost under $2,000 for Pistol, PPC, Sights, Optic, Mags and the 300 rounds of Underwoods to fill them.

If I was in the position that I could afford to throw away $1,500 + another $800-1,000 for accessories and ammo I would be interested in the Pivot. I think the there are clearly folks with that kind of EDC budget or more even. Nothing wrong with making stuff for that market at all.

Yeah, 300 BLK subs cut through the wind better with more muzzle energy, but getting those to expand/tumble consistently and stop in the target is hard, unless you get rare bullets like the 190gr Hornady Sub-X and load them yourself. 220gr will zip through without such a large temporary wound cavity, even with BTHP. Most BTHP bullets like 220gr Sierra MatchKing were not designed for subsonic expansion in 300 BLK. Actually, they were designed for supersonic .308 Win, and even then the goal is often competition accuracy and wind resistance at the expense of tumbling and expansion performance. 300 BLK is a compromise, and won’t give the best possible results with subs or supers.

In contrast, for 9mm we have beautiful, purpose-designed stuff like 147gr Federal HST, which is subsonic, cheaper, more easily found, and a mature, battle-proven design for expansion even after passing through denim.

Then again, if money is no object, and you want even more silence, you might want to check out 45-cal PCCs, since we’ve got plentiful, wonderfully-designed expanding hollow points (like 230gr Federal HST) in that caliber too.

The argument (for non-reloaders) in favor of 300 BLK then, is the ability to switch to supers. The question is, are you likely to switch for your envisioned use case? If not, and you want supers, and 5.56 is not enough for you, maybe 6.8 SPC or 6.5 Grendel fits the bill better in a similar weight class.

But if you know you are doing CQB and you want subs, and you want lots of cheap practice, lots of capacity, and maybe the ability to share mags with your 9mm handgun, 9mm subs might be the king.

… and none of that matters one bit to a lot of people, like me, they just want something fun to play with. that said i do not disagree with you much here. My 260gr cast subsonic Blackouts tumble something crazy and given shot placement have been proven with pigs as well as yotes.

they just want something fun to play with.

It definately looks like it would be. Kinda of cool to be the first to review too.

well, in this video i was the first to shoot the thing outside of the factory, so, who knows, maybe when they release in a couple of months i will get lucky there too