Guy shoots Moose in self defense. Would you survive in the middle of the woods being attacked?

you know that would have only taken one shot if he’d have been using a .45🙂 especially out of a 1911)

Yea , I would much rather have a 10mm in that situation.

Yeah… there was no need to shoot that moose. Guy should have known better… given the moose time to get off the trail. Sad story.

WOW, he did exercise patience,

The moose or the asshole shooting the moose?

It was sad to see it fall, I suppose had the man exercised more patience the moose may have left the trail altogether.

Maturity is not for the timid

Yeah there was a big uproar when this first came out a few years back. That jackass could have just waited… turned off his sled even. Obviously the snow was very deep, the moose panicked. Hey, moose are dangerous… but they are not bears. He pushed that moose from the beginning. I think he was charge with a crime even. Not sure on that… will have to look it up. 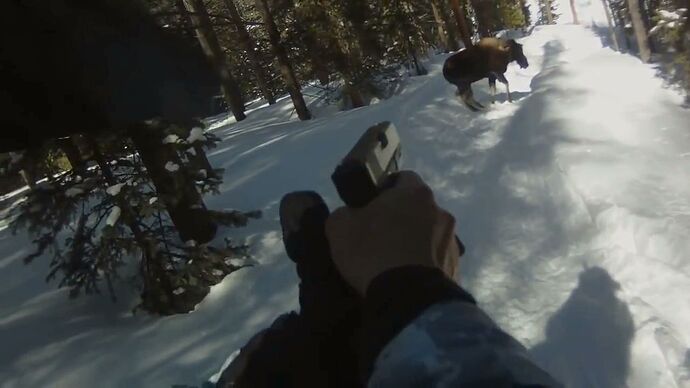 Before you read any farther (and hopefully, before you view the shocking video that we’ve attached to today’s blog, it’s important to note that we have no reason to suspect that t…

I could not find the information on whether or not the guy was charged with a crime.

Ive only had two brownies close enough to worry me and that was up in Alaska. Most aggressive animal ive had come at me around here was a badger that wanted to goto hell, i probably put close to a whole mag of 9mm in that little bastard and he kept coming, damn near got me to lol I also been attacked by wild dogs …Oregon is pretty chill unless you aggrevate the mountain lions or meth monkies

He could have fired a warning shot , probably would have scared the moose off.

Moose aren’t afraid of hardly anything and they kill more people than any other animal in North America.

Moose can definitely be dicks but I think meth monkies kill more.

You could look at this the same way as any other shooting.

Conclusion - the guys an asshole and should have been arrested.

Keep in mind though, moose probably tastes a lot better than the average schmuck you would kill in a self defense situation…just sayin…

5 Likes
The merits of the caliber debate with modern ammunition
LonewolfMcQuade October 11, 2018, 6:15pm #21

You should start a cooking show! maybe Jeffrey Dahmer can get some work release from prison and co-host with you