Anybody here had a heart attack,or multiple,and still around to tell the tale? I had my first one Sunday morning. Was airlifted to a cardio place in Virginia and they went thru my wrist and put a stent in near my heart. It clogged up later that night and I had another heart attack very early Monday morning. They went in thru my groin this time. Cleaned that one up and placed 2 more. Kept me 2 days to monitor my vitals. I’m home now relaxing. Have my medications etc. I just feel so weak,like I don’t want to do anything. How long did it take to get to feeling like you were back to normal? Have to slow things down? Etc.

Praise God you survived Paul. My limited knowledge is that isn’t always the case. Fast response is what saves most. None myself thankfully, but those I know of it was months coming back and a lot of dedication to the process of healing. Our prayers go out to you for a speedy and full recovery…

Sorry you are having such a rough time. Very glad you survived your heart attacks.

In my family, we get strokes instead of heart attacks, so can’t help much. But, like @Ridgewalker said, speedy care for heart attack patients is critical. Glad you got it.

Hope you can figure out what is causing the blockage and get that resolved.

Take care and take it easy!

In June 2019, on a Sunday, I had a very mild heart attack. I had a few symptoms, funny sensation in my left arm that wouldn’t go away, Can’t remember others other than a feeling of impending doom. Yes, online that is listed as a symptom. I had the wife drive me to the hospital a few minutes down the road. By then I was OK, but they did an enzyme test and it was negative. When heart muscle dies it leaves behind a specific enzyme. They believed I had a heart attack and waited 4 hours and did another which was positive. They kept me and did more testing. A day or 2 later they shipped me off to one of the 10 best Heart hospitals in the country according to US News and World Report, down in Portland Maine. It’s a teaching hospital. A day or 2 later I had a triple bypass. On Saturday of the same week I was discharged. I went to phase 2 rehab, and since then have paid for phase 3 rehab. That means exercising under medical supervision. Phase 2 was structured exercise while wired and nurses watching for problems. Phase 3 is do what we want for exercise.

When I was in the hospital discussing my symptoms with a night nurse I mentioned the feeling of impending doom. She agreed with it and stated that the subconscious mind knows what’s going on and knows how critical the heart is so yes, it’s a symptom.

I was lucky that my heart attack didn’t go unnoticed and was so mild. While they had me open they ran a test on the heart and it still came up to new heart specs. If I remember the #s a new heart scores between 60-65 and mine scored 60.

Things that I ignored before my heart attack? Shortness of breath was the big one.

Today I take meds for the heart and to control the LDL that my liver makes. But diet? Do your own research, but I will say that we’ve been lied to for years. What you think you know about a healthy diet is all wrong. I eat anything I want, no carbs, and my LDL/HDL is always near 70/70. My Dr tells me there are people who would kill for those numbers. I know they’re good enough to get me 3+ years more life.

One condition common among heart patients is PAD (peripheral artery disease) and I’m “lucky” enough to have it. What it means is that I can walk normally for a short distance but then my calves aren’t getting enough O2 and pain starts, it keeps getting worse until I stop and let blood deliver the O2 that the muscles need. Then I can continue. I have roughly 35% blood flow to each leg. The solution for me? Slice open my femoral arteries and have them scraped out. Then a month of being in bed, no cheating. So I work on the PAD in cardiac rehab. I like my femoral arteries without them being sliced open. But that option remains open to me.

Hey, getting old isn’t for sissies.

It is great that you got the help you needed and you made it through. My wife has had a couple of near heart attacks (never any heart muscle damage) and has a total of 4 stents. The key to building your strength is the cardiac rehab. My wife says they start off annoyingly slow. Take your time to heal and follow the rehab. They will get you better safely.

Gunarchy, our experiences weren’t the same, but It took me weeks to get strength back in my voice. Longer to get physical strength back. It’s a traumatic event and it takes as long as it takes to heal. That’s the best answer I have for you. One day at a time and follow Dr’s instructions. But seriously, research diet.

edit: And I left out part of the story… My older brother came up to help with some things I couldn’t do and we got to talking. I told him about the PAD and he told me that he had the same symptoms. When he got home he went and got checked out. the next month, July, he had a quad’ bypass. The month after that our eldest brother had his quad’ bypass. If we had only known maybe we could have gotten a group rate.

Obviously genetic. I knew my dad died of a massive heart attack, but I didn’t know that grand dad also died of one. So it’s in the family. 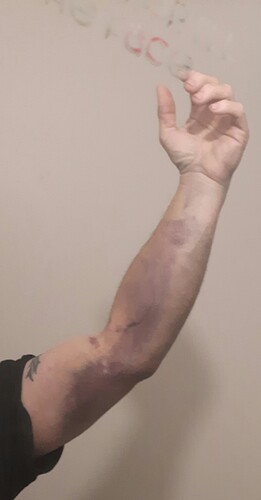 Result from first stent. When they went in my wrist

Damn man. Ouch. Not a good result. Looks like a truck ran over it.

Very glad you survived it and are in the path to healing.

Glad your ok and getting better. Note to self. Don’t let them try installing stents through my wrist. Not that I need stints but you never know.

Glad you got help quickly that is an advantage.

Yikes , glad to see you didn’t kick the bucket.

Glad you’re still on this side of the grass and here again. Stay well James

LDL carries nutrients to the brain, and has no bearing on heart disease. For the love of God, please stop taking them.

I will share my anecdote first. My grandmothers second husband took statins for a couple of decades. It seemed to not matter. He died from Alzheimer’s disease. In the late 90s, I didn’t think anything of it. Then, someone posted a video. I think I have played here before. 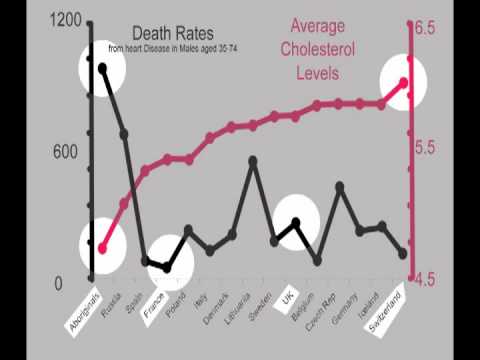 After that, I started reading. A lot of research was published. Even at places like CNN. But of course they take it down. I found this pdf.

William P. Castelli, MD, a medical director of the Framingham Cardiovascular
Institute, directed a study carried out over 16 years. He reports that twice
as many people with life-long cholesterol levels in the range 150 – 200 have
heart attacks as do people with cholesterol over 300!12 This is Shocking! This
fact doesn’t get publicized

• Bone would be hollow and brittle if it were not for cholesterol and
protein.
• Cholesterol has a major structural role in the brain, where it is
found in high concentrations.
• Cholesterol enables nerve impulses.

Brain cells are extremely rich in cholesterol; they consist of about 7% (by
weight) of cholesterol. I can’t repeat this enough. Cholesterol is the raw ma-
terial from which the body makes many important hormones – the adrenal
hormones (involved in sugar metabolism, fluid balance, the maintenance of
blood pressure, and the preparation of the body for stress) and the male and
female sex hormones: testosterone and estrogen. In addition, cholesterol is
essential for the normal growth and repair of body tissue.8 Large amounts
of cholesterol are also found in the skin

When I read that, I immediately knew what happened to my grandmother’s husband. And now, there is research showing what I learned a decade ago.

102 Objectives: Studies of the relationship between use of statins (HMG-CoA reductase inhibitors) and subsequent cognitive performance have been variously reported to demonstrate beneficial, harmful, or no significant effects. We aimed to help...

Conclusions: Among subjects with early mild cognitive impairment and low to moderate serum cholesterol levels at baseline, lipophilic statin use was associated with more than double the risk of converting to dementia over eight years of follow-up compared with statin non-use, and with highly significant decline in metabolism of posterior cingulate cortex

The sad part is you don’t need a study to tell us that.

Well they said I would only be on my medications for a year. After just my low dose aspirin for the the rest of my life.