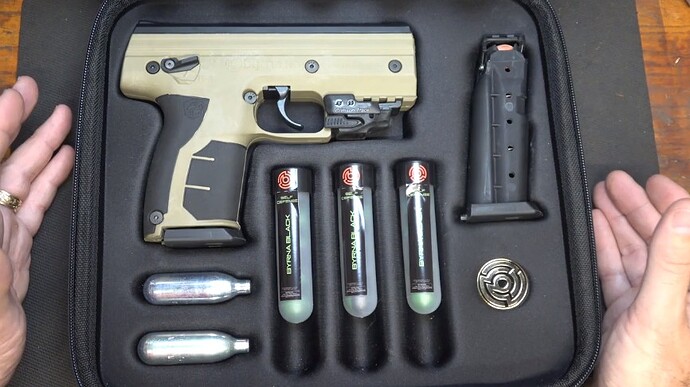 Nope, you couldn’t give me that POS. now it might be fun to shoot stray cats with it.

Looks like they both had to turn and walk into the very small cloud of OC/CS so without a direct hit to the face, doesn’t look like it would be very effective at all.

HAHAHAHA!!! Stupid idea and a stupid device. If regular old fashioned cartridges take multiple shots to stop assailants on average what the hell do people think this’ll do? Nothing but piss off your attacker(s).

I’m sorry but I want anyone attacking my family or myself to be guaranteed neutralized and we all know what that means.

Now slow down kids. Don’t judge it too quickly. I think they just got the application wrong.
I wouldn’t choose this as a defensive tool. But it’d be a gas at an ANTIF protest.

That would still be a NOPE.

I believe in CS rounds enough to buy one of these

I suppose that a shot to the face or eye could be effective, but not if the bad guy is wacked out on drugs. OCS will never stop someone who is high on PCP or meth. Acute lead poisoning is a better option for those guys.

“Pepper” is a seasoning I add when eating what I have killed. Nothing I would use when actively shooting.

So this useless POS might make a great seasoning device for the bbq grill?

Buying one… my daughters school has no rule about the shape of pepper spray.

At least a HiPoint can actually help you defend life and liberty.

I can’t wait to try this out on my neighbors.

I got one of these. My theoretical application is similar to how police use a taser: It might not work, so only use it if you have lethal backup, or to enable running away.

In my synagogue a few others are carrying real guns, so I am likely to have lethal backup even before I drop the Byrna.

I’m still checking it out. So far, it’s a decent tool, not as polished as my Glock. On functional grounds, it’s a toss-up for me between this and OC spray. Sights, extra range and precision are nice to have, but the OC spray is less bulky and easier to activate.

The initial trigger pull is terrible, I reckon about 12 lbs to pierce the CO2 can, but after that it’s a bearable 7lbs. The trigger is definitely much worse than a Glock, with a long pull and reset. It gives a decent startling pow that annoyed my wife inside without hurting my unprotected ears. The safety is ok, it’s ambi, and it takes me just a little reaching with my thumb. The grip is rubberized, but it’s smooth, which I don’t like so much. I’d prefer texturized plastic, or if rubber, texturized rubber, something more like the Magpul MOE+. I also have to carefully look the magazine into the grip, or I might empty the mag by mistake when its retention bar bumps the magwell. That said, I don’t think a reload is as likely as me escalating to lethal force.

The balls at 7yds tore about 7 layers of cardboard. I bet it could break most car windows, but beware the rebound if it hits metal.

but beware the rebound if it hits metal

I sooo hope you own a Go Pro & get bored someday…

Byrna Gun is a good option for self defence.

Being thats its at the same price point as a 38 special snubby, Me thinks that this is made for the female market. I used to sell stun guns to ladies. This would have been an option, yet way more costly.

I have a Byrna. But there’s lots of caveats.

One, the magazine holds only five pellets, and if you’re not careful with your reload, you’ll accidentally release them from the magazine and spray them all around under spring tension.

Four, look at the Kim Potter case. The one where the officer said, “Taser, taser, taser!” and then shot her pistol instead. With unbalanced training, it’s possible to get your tools mixed up, especially if they are fired the same way.

On the other hand, it’s a way to practice fundamentals safely in your backyard. Often the balls can be reused, if you fire at a soft enough target.