The Henry Axe lever action .410 non-nfa shotgun.
I can’t find one of these in stock anywhere.
Are they just sold out?
Looks like a fun grouse gun for my dirt bike.

This is a fun gun for whatever you wanna do with it! I was shooting clays with it a week or so ago (some even one handed).

I can’t find one in stock anywhere.
But getting one as soon as I do. 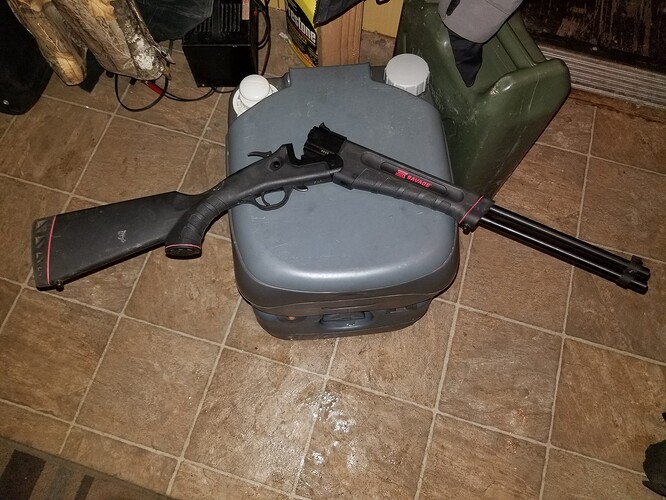 Sorry for the comode.
I live in a shipping container. 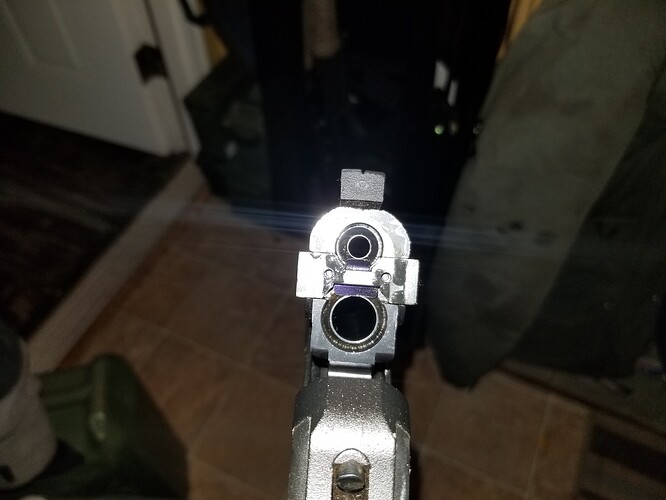 I have several 12 gauge shotguns.
No problems with them.
And I like .410 gauge for what it is. 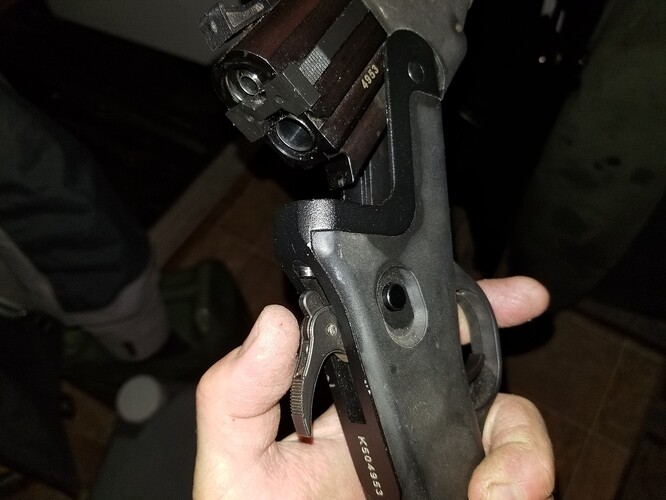 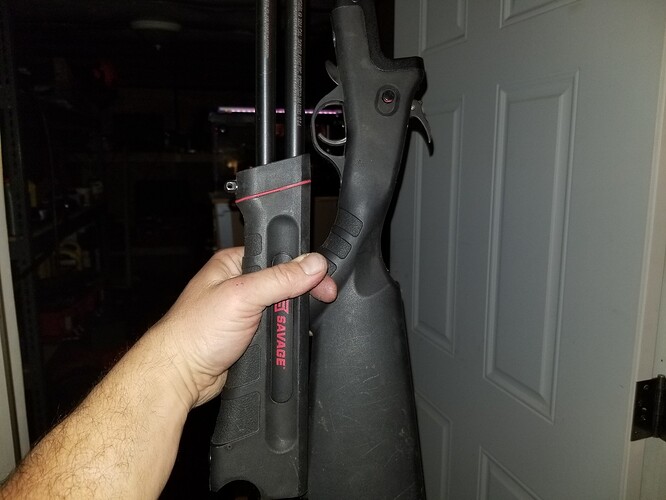 It breaks down with the push of a button and slide of the fore-end.
I have found this to be an exceptionally accurate .22
The .410 barrel has not choke nor and provision for a choke.
It is good for grouse out to about 20 yards.
After that I select the .22 barrel.
It is legal to hunt ruffed grouse with .22.
Obviously providing they are on the ground.
I would never try and take one out of the tree with .22.
Yet the last 2 grouse I took were with the .22 barrel.

Hilarious story;
I was on the rim of a canyon about 200 yards back from the edge.
In sage brush, when I saw a grouse flush and fly up into the only tree around.
I waited.
Then i crept up slowly to get within .410 range, selecting that barrel as I went.
Shouldered the Savage.
Drew a bead.
The grouse suddenly took flight.
I restrained my shot thinking… he is just going to land close by and I will stalk him again.
Right.
That damn ruffed grouse took wing like and eagle!
Flapping his wings just a few times, he was on a perfect glide path; low and steady.
200 yards he flew and dissppeared over the rim of the canyon.

I had never seen one do that.
Yes, it was a ruffed grouse and not and actual eagle.

It made me laugh.

That Savage is a cool little survival type gun!

It is made well.
But of rather cheap materials.

My Marlin Papoose takedown .22 in stainless steel is a superior rifle on the .22 side.

My FFL called me…
He found me a Henry Axe .410 lever action firearm.
He already bought it and it is being shipped.
Should be here next week.

Now the ironic part.
People are losing their shit and selling stuff off to pay other stuff.
I have been saving for years.
Finally decided to start buying firearms with my spare cash since it isn’t earning squat in the bank.
Just this morning I responded to an ad for a Mossberg 590A1 tactical 12 gauge.
I was on my way down the mountain when I got the voice mail from my FFL that he has a Henry Axe and it will be delivered next week.

I will be doing a fun mini review here of the Henry Axe when it gets here.
For now, here is the 590A1.
Only 20 rounds through it.
Magpul fore end.
Holds 8 + 1 and 4 in the butt stock.
It is brand new.
500 bucks.
The guy just didn’t shoot it much and rather have the money.
Came with the original fore end.

Plenty of guns and ammo in town.
They are short on the “hyper” ammo.
But normal 9mm fmj, 12 and 20 gauge target, bird, buck, and slugs, were plentiful.
I always have my eye out for deals.
Found this Mossberg in the little paper 3 weeks ago.
Finally just went and got the dang thing.
Really a very good deal i think. 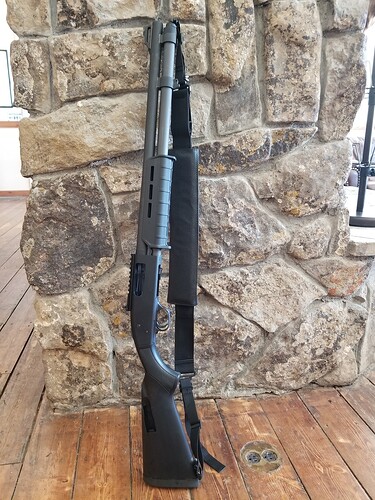 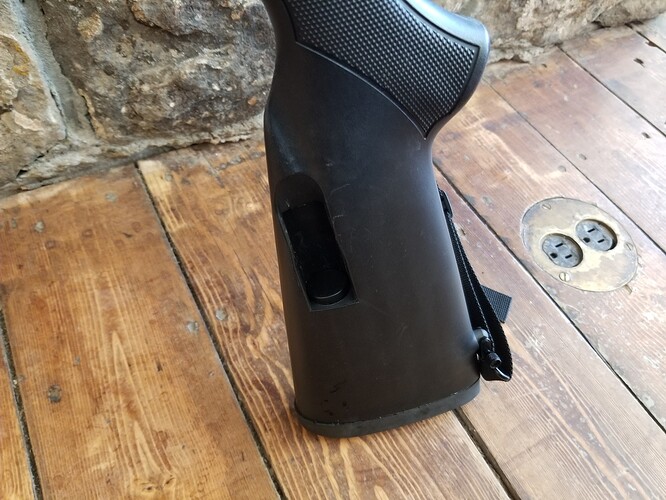 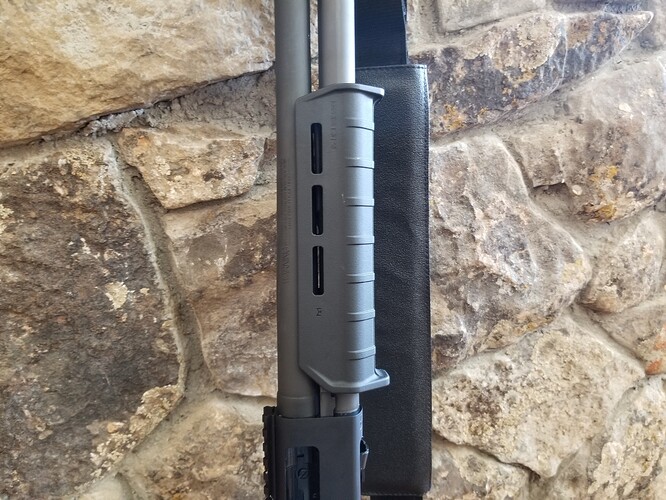 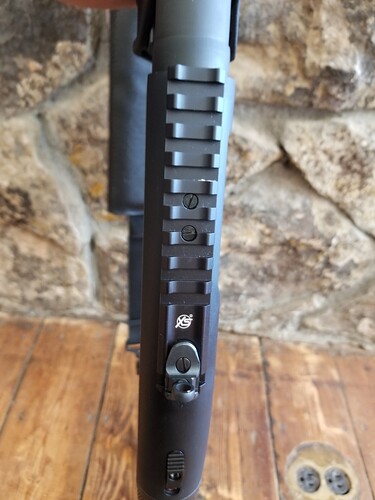 Finally decided to start buying firearms with my spare cash

I was just going nutz up here and needed some supplies from town.
Called that guy on a whim.
2 hours later (only because everything is 100 empty miles apart in Wyoming) it was a done deal.
Mossberg 590 A1 tactical, and my first pump action shotgun, mine.

Excited to get hands on the Henry Axe next week too!