In 2010, Advanced Armament Corporation developed the .300 AAC Blackout in conjunction with Remington Defense, with the intention of offering a .30 caliber cartridge with better performance than the 5.56mm ammunition currently in use. Replacing the 5.56 NATO cartridge is an idea that has been around since its introduction, but the urgency rose with the global War on Terror, which rapidly placed many of our troops in harm’s way across many different situations and unfamiliar geography.

Why Was the 300 Blackout Round Developed?

The key motivator to consider replacing the 5.56 NATO was the increased terminal performance offered by a .30 caliber round. This alone, however, would not necessarily justify wholesale replacement of the military’s primary issue rifle. Any cartridge that replaced the 5.56mm would need to be compatible with the M4 weapon system. The .300 AAC Blackout is compatible with the M4 system, since the case was built from the existing 5.56mm cartridge, allowing for the use of the same magazines from the M4, and to full capacity. To convert an M4 rifle to .300 Blackout, the barrel is the only part that needs to be changed.

The noise of the .300 AAC is drastically reduced with the use of subsonic loads and a suppressor. Some describe the resulting noise levels as similar to the Heckler & Koch MP5-SD, which fires 9mm ammunition. Coupled with a bullet about 40-percent heavier than the 9mm fired from the MP5-SD, and moving nearly 100 feet per second faster, the .300 Blackout dramatically outperforms the previous gold standard.

Colt Firearms and other ammunition manufacturers had attempted to chamber AR-type rifles for .30 caliber ammunition – without much success. The problem with the 7.62x39mm, for example, was that it experienced feeding issues unless it used highly specialized and modified AK-47 magazines. The 6.8 SPC and 6.5 Grendel likewise had similar issues.

Unsurprisingly, wildcatters stepped in to come up with a solution. One result was the .300 Whisper, but a wildcatted round is necessarily difficult to adopt for widespread military use. The 300 Whisper round was primarily for single shot handguns. And because it did not have industry standard dimensions, this made it not an ideal choice for use in the AR builds favored by Western military forces.

Development changed when the industry had a bit of an “a-ha!” moment – seeing the M4 or the M16 as the primary recipient of the new, theoretical round. This allowed for greater flexibility of design. The main draw of M4 and M16 builds was that the only mechanical change required for a new round was a barrel change, so no complete conversion of the weapon was necessary.

The 300 Blackout Round in the World’s Militaries

Since then, the round has not seen widespread adoption as a standard-issue military round. In fact, it is only in use by special forces in the few places it has been adopted. All told, only three nations have adopted the 300 Blackout:

Despite the round being designed for M4 and M16 builds, it has found a captive audience in the United States among aficionados of the AR-15 – America’s favorite rifle. While many AR-15 shooters like the 5.56mm NATO, the cartridge is not without its problems from the perspective of the civilian shooter. Namely, the sound and overall firearm capability.

What’s more, the 5.56mm NATO requires at least a 12” barrel for practicality. However, anything longer than this magic number required to burn off all the powder and avoid a (mostly harmless) fireball means decreased range. There goes your suppressor. The 300 Blackout is thus more powerful as well as more versatile for the average civilian shooter.

Because the 300 Blackout and the 5.56 NATO are so similar, it’s worth taking a moment to compare the two to see which is the superior round for your purposes:

The .300 AAC Blackout is a new cartridge with many positives, including its compatibility with the M4 platform. Additionally, it offers increased performance for both supersonic and subsonic applications, which offers clear benefits for military applications. For the civilian market, the cartridge increases the versatility of the AR-15 platform. And due to increased bullet performance, hunters can use the .300 Blackout for harvesting medium-sized game animals.

If those reasons are not enough, the .300 Blackout – with its fantastic accuracy and controllable recoil – enabled SSG Daniel Horner of the U.S. Army’s Marksmanship Unit to use the cartridge to win the USPSA Multi-Gun Nationals in 2011. This round offers a great deal to all kinds of shooters, and without a doubt, has a very bright future.

History of 300 Blackout Ammo originally appeared in The Resistance Library at Ammo.com.

The history of the .300 blackout…
Bored people made another worthless cartridge that is defended by people who are into that thing with great fervor. During times of crisis the manufacture of this round takes away from manufacture of other more commonly used and useful rounds that are all around more balanced. As it occupies as slot within the .30 caliber cartridge manufacture process. (30:06, 30:30 ect…)
Alternatives are available, that have overall better performance and do not put stress on domestic businesses.
7.62x39 is an overall better cartridge, more readily available and already has import and local manufacturing chains that ensure a steady supply without effecting the production of other more important cartridges during this time.

While I might argue a bunch of your opinions on this cartridge, I won’t.
I’ve used it, found it to fill a role that I need it for that isn’t filled by either 5.56 or 7.62x39 and that’s good enough for me.
“Usefulness” is in the eye of the beholder.

I own one and its neither. 7.62x39 and 30.30 performs better at all the same ranges for hunting and Suppressed. 7.62x39 is a far superior cartridge for MUCH less money to fire.

When it was first announced I didn’t have a use for it, as soon as I heard Iowa was legalizing silencers the parts started hitting the carts. I’ve built 4 with 10-10.5 inch barrels and pistol gas now. I have gotten fantastic accuracy with them all, seems to hit some sweet spot that’s just inherently accurate, there not “match” grade but they will stay on the steel all day. With the SDN-6 it’s a joy to shoot, hollywood quiet stuff. You gotta pay for the joy though, ammo cost is high but when you ask a grandkid or a nephew what they want to shoot the 300 BO pistols wins the popularity contest.

I never seen or heard of a 300 blackout.

It have something to do with 300 people losing power?

My experience matches yours in many ways. I run a 10.5” pistol/pistol gas system. 125gn Hornady hp’s are my favorite. Dead nuts accurate and literally drops everything I’ve shot with it so far.
One of my buddies is the Firearms Instructor for one of the States largest PDs. Their SWAT team switched over to suppressed 300 BO SBRs a while back and absolutely love the results they’ve had in the field vs what their 5.56 SBRs were doing. IIRC they are running the Barnes 110gn TSX

Can’t beat that “tch tch tch” you get from 300 Blackout out of a suppressor.

There are several excellent 300BLK rounds out now and have been for a while. The 300BLK make for a superb Hunting or Home defense caliber👍 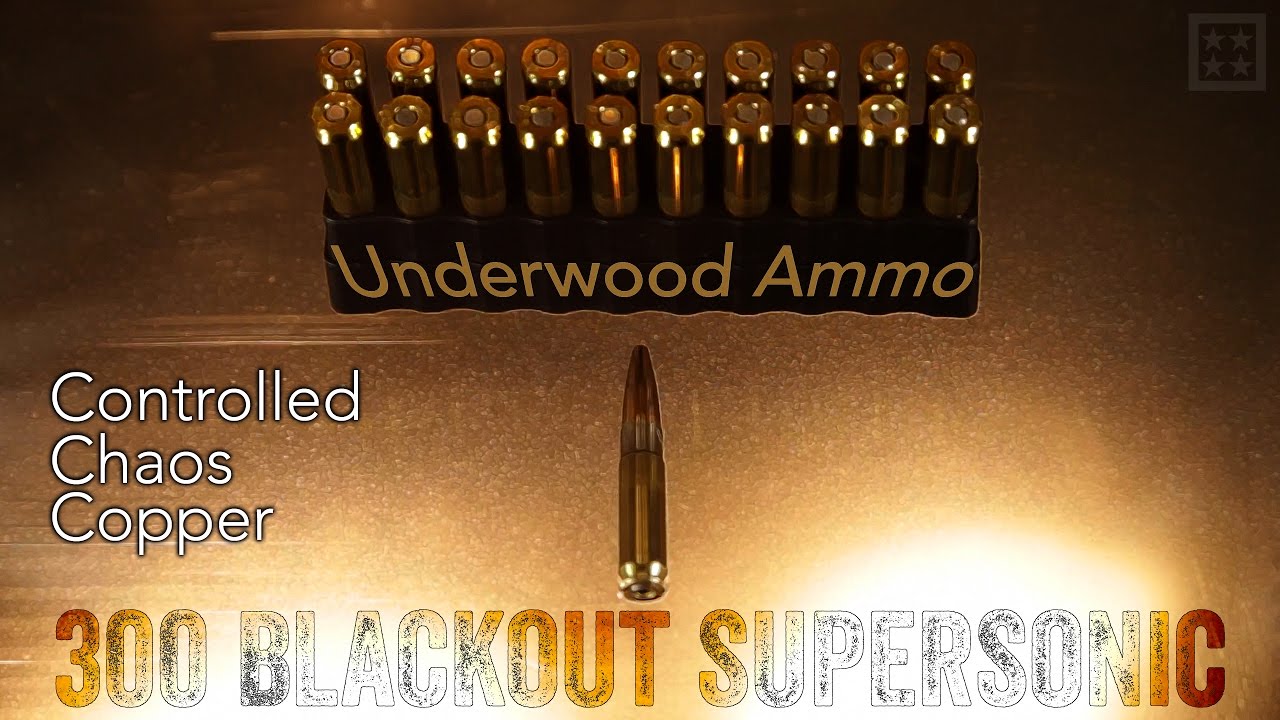