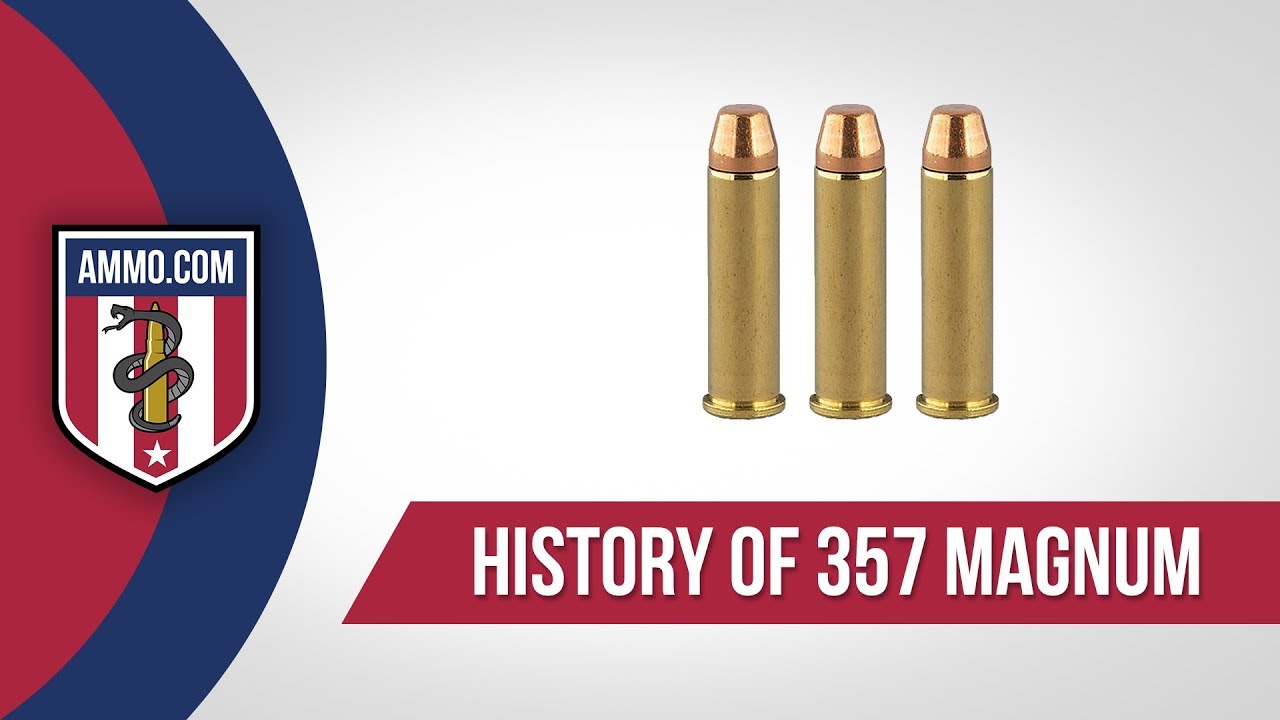 The .357 Magnum – the first and most popular handgun magnum caliber – is a rimmed centerfire cartridge that has proven itself through more than 85 years of use by law enforcement and shooting enthusiasts throughout the United States and beyond.

Today, .357 Magnum ammo is one of the world’s most popular high-velocity handgun cartridges. It offers shooters a flat trajectory, deep penetration, and superior knockdown power, making it effective for police forces, hunters, and target shooters.

Development of the .357 Magnum Bullet

According to Cartridges of the World, the .357 Magnum cartridge was developed in 1935, as an improvement to the .38 Special. It resulted from of a collaboration between the legendary Elmer Keith, gun writer Phil Sharpe, D.B. Wesson of Smith & Wesson, and Winchester firearms.

The need for a stronger handgun cartridge arose after World War I, when law enforcement needed ammunition that could penetrate vehicles and the newly emerging ballistic vests. Bootlegging was rampant during this time period, as was gangster activity, and police needed an efficient and effective way to fight against them.

The .38 Special, which was the common caliber carried by law enforcement and special forces at the time, was powerful, but barely reached the necessary velocity of 1,000 fps that was needed to get through vests and car doors.

The idea to elaborate on the .38 Special cartridge came from Keith, who was an avid gun enthusiast, loading experimenter, and handgun hunter. He’d been loading .38 Special ammo to a higher pressure and was involved in the creation of revolvers like the Smith & Wesson .38-44 Outdoorsman. These were heavy-framed .44 caliber frames, bored for the .38 Special.

These strong frames could withstand more power and pressure than those designed for the standard .38 Special and could handle the bigger bang. Based on this idea, the team started with the .38 and set out to make something bigger and better.

The final rendition of S&W and Winchester’s .357 Magnum bullets took the .38 Special casing and extended it by one-eighth. They kept the same .357 diameter bullet (the actual bullet size of the .38 Special) and packed a little more powder at a slightly higher pressure into the 357 shells.

This casing extension didn’t just give its creators more space for powder, it also made the .357 rounds impossible to fit into firearms chambered for the .38 Special, which most likely couldn’t withstand the power of firing the bullet.

The first cartridge held a 158 grain (gr) bullet and shot the semi-wadcutter load at over 1,500 fps out of a larger N-frame revolver with a 8 ⅜ inch barrel. To further test the .357 Magnum rounds and firearm, which would eventually become the S&W Model 27, Wesson took the revolver and ammo on a big game hunt in Wyoming during the fall of 1935. Proving the effectiveness of the cartridge, Wesson harvested antelope, moose, elk, and even a grizzly bear with the new firearm and cartridge.

The .357 Magnum revolver went into production and the first one to leave the factory with the serial number one, was given to J. Edgar Hoover. After its release, the .357 Mag spent 20 years with the title of the world’s most powerful handgun cartridge.

After its initial production, the .357 Magnum proved itself a worthwhile cartridge. U.S. military personnel used this caliber from World War II through Vietnam. General George S. Patton, one particularly famous .357 Magnum shooter, carried two revolvers, one an ivory handled (not pearl) S&W .357 Magnum and the other an ivory handled single action .45 Long Colt.

For years, revolvers chambered for the .357 Magnum sat on the hips of police officers, security guards, and some of the U.S.’s special forces. Even today, decades after classic revolvers were replaced with semi-automatic pistols, short barreled .357 Mag revolvers still offer backup support to those who protect and serve.

The .357 Mag cartridge also become popular for hunting, silhouette shooting, and self defense, both against human perpetrators and dangerous game (if in the area of the largest predators, such as grizzlies, many suggest opting for a magnum cartridge of a larger caliber, such as the .44 Magnum, .41 Magnum, or .500 S&W, but with practice and accuracy, a .357 Mag can help).

Due to its aforementioned versatility, the .357 Magnum provides a full range of applications and offers just about everything a handgun owner needs for target shooting, protection, and hunting. Because of this, if someone wants to only own one firearm, many recommend it be a .357 Magnum revolver.

Since its conception, a plethora of revolvers have been built to accommodate the .357 Magnum cartridge and a high demand for these firearms remains today. Not only do all major ammunition manufacturers produce .357 Magnum ammo, but all major firearms manufacturers also produce a weapon for this common caliber.

Over the last two to three decades, revolvers – as a whole – have fallen in popularity when compared to semi-automatics. Yet many would argue that revolvers are not only a viable option for most handgun needs, but they’re also better suited than semi-automatics.

Revolvers tend to be more resilient than semi-automatics and can often withstand rain, snow, sand, and neglect. They’re reliable firearms, less finicky than magazine-fed pistols and much less likely to misfire. And with fewer components and moving parts, revolvers are easier to clean and maintenance.

Combine these benefits with the power, trajectory, and accuracy of .357 Magnum ammunition, and it becomes evident why this cartridge and the firearms chambered for it are an American favorite.

Here are some of the most popular and best performing .357 Magnum revolvers made since the cartridge first hit the market.

Smith & Wesson Model 27: Smith & Wesson’s first revolver chambered for the .357 Mag would eventually become known as the Model 27. Designed on the N-frame, this classic piece features a six-shot wheel, four-inch barrel, and carbon steel frame with a blue finish.

Colt Python: Often referred to as one of the finest made revolvers in history, the Colt Python was marketed as a premium-grade on its release in 1955, and is still considered a premium firearm today. This iconic six-shot revolver is ergonomic and accurate, and came in multiple barrel lengths. Since Colt ceased production of the Python, the price of these .357 Mag revolvers have soared.

Smith & Wesson Model 19: Called the “answer to policemen’s prayers,” the S&W Model 19 is a double action, six-shot wheelgun that started being produced in the 1950s. Designed on a K-frame, the Model 19 was lighter and more ergonomic than the Model 27, and S&W offered it in multiple sized barrels – from two and one-half to six inches. First called the Combat Magnum, the Model 19 was so popular, the revolver remained in production for 45 years (S&W ceased its manufacturing in 1999).

Ruger Blackhawk: The Ruger Blackhawk was first released in 1955, and this popular .357 Magnum revolver is still in production today. With a six-shot cylinder, this cowboy-style revolver is extremely customizable and affordable. Today, Ruger claims it as the most-advanced single action wheelgun ever made.

Taurus Model 608: For those who are looking for more than a six-shooter, the Taurus Model 608 is a .357 Magnum revolver with an eight-round cylinder and six and one-half inch barrel. This firearm features amazing accuracy, reduced muzzle flip, and the Taurus Security System that makes the revolver unable to fire without its key.

Chiappa Rhino 40DS: Modern and unconventional looking, the Chiappa Rhino 40DS features a four-inch barrel and options for both single and double action firing. This .357 Magnum revolver’s unique design and low bore axis give its shooter less recoil and muzzle flip. Combined with its adjustable fiber optic sites, it is the 21st-century’s revolver.

Charter Arms Mag Pug: For those looking for a .357 Magnum revolver for a concealed carry weapon, the Charter Arms Mag Pug provides a big bang in a little package. With a five-shot cylinder and just over a two-inch barrel, this compact .357 Mag wheelgun is truly compact. Made from stainless steel, it still features a full-sized grip, allowing its shooter comfort and control.

The .357 Magnum cartridge comes in a variety of types for different needs and goals. Some of the most common include:

Using .38 Special ammo in a .357 Magnum revolver can bring a range of benefits. With less powder and pressure, the .38 Special cartridge reduces recoil and muzzle flip, making it easier to handle, especially for small-framed shooters or those with limited experience. The .38 Special rounds also tend to be less expensive than the more powerful 357 rounds, which may mean shooters practice more regularly.

Are There .357 Magnum Semi-Autos and Rifles?

The .357 Magnum is mostly found in revolvers, however, other firearm are chambered to this caliber. Marlin, Henry, and others have manufactured lever action rifles for the .357 Magnum, and Ruger introduced a bolt action rifle chambered for the cartridge as well.

Israeli Military Industries and Coonan have made semi-automatic pistols that fire the .357 Magnum, but these magazine-fed pistols haven’t gained in popularity for a few reasons. Due to the size of the cartridge, these pistols have a rather large grip that’s uncomfortable for many shooters. What’s more, the development of the 10mm resolved the need for a bigger, more powerful semi-auto round.

Although the .357 Magnum is now less popular among law enforcement agencies due to the advantages in performance and capacity offered by semi-automatic pistols, it’s still a valid hunting, self-defense, and plinking caliber. And with a wide range of .357 Magnum ammunition made by popular ammo companies like Hornady, Federal, and Magtech – all of which offer competitive 357 Magnum ammo prices – this cartridge is by no means obsolete. It’s versatile and can be shot in many firearms, ensuring that the first Magnum will continue to be one of the most popular on the market.

History of 357 Magnum Ammo originally appeared in The Resistance Library at Ammo.com.

I did try the Coonan, had one of their first hundred produced when they came back to the market, even had a custom serial numbered Kadet made to match that when they built those 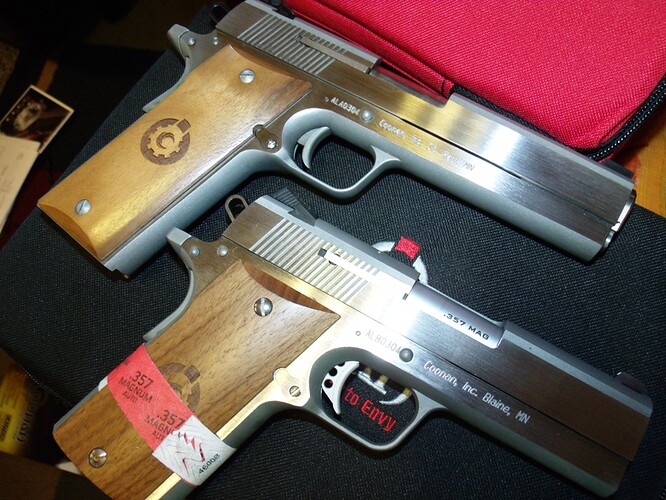 But in the end, sold them and settled with 10mm

I love 357s this one sits in my desk, and sometimes in the cooler weather in my jacket pocket. 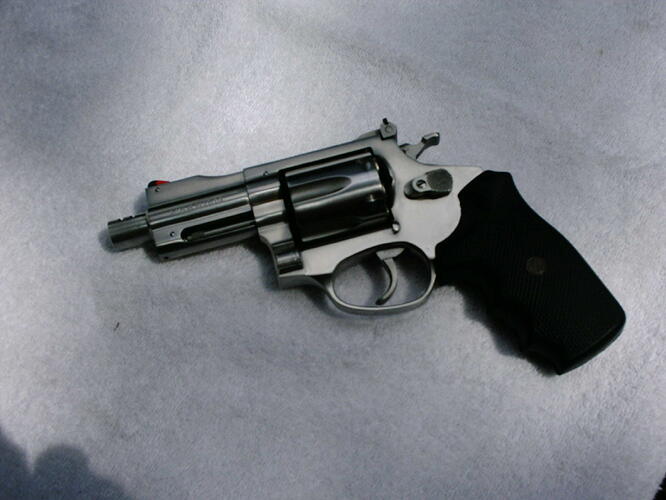 Did yours jam very much? I know someone who had jammotic issues with his.

Its the only pistol I ever sent in, it stove piped a lot, the thumb safety also fell out

I sent it in, they fixed the safety and said it ran normal for them when they tested

It also had some peeling where the slide release was, they said that was normal also

A lot of cool factor, .357 is surely an awesome round, maybe the Deagles fair better IDK

Nice write up. I appreciate it.

Both this and the .44 belong in the camp of acceptable for end of the world use. Just don’t wait for the panic to pick up your matching carbine. At least that is how I see it.

I’d definitely rather rely on a revolver with like three moving parts over a semi-auto with springs in it.

Some of us are more stubborn.