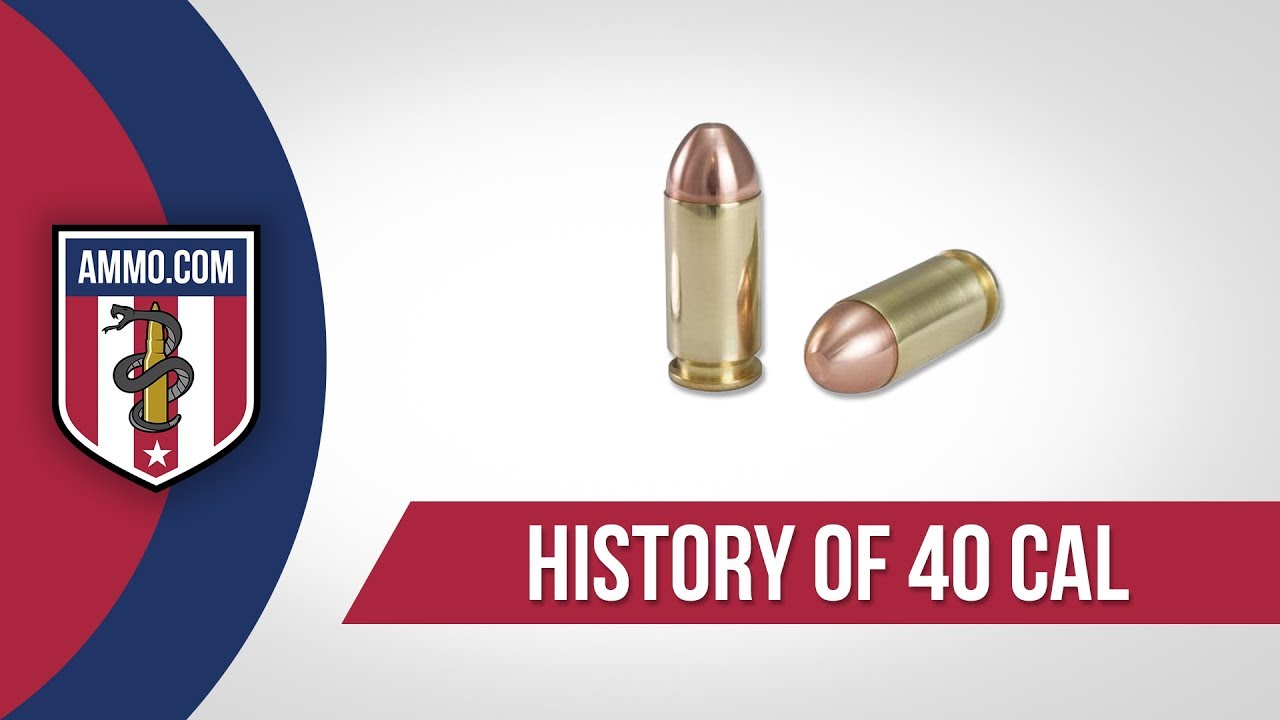 The final result from the Smith & Wesson/Winchester team was a rimless, 10x22mm round that housed a .40-inch (10mm) lead bullet weighing between 105 to 200 grain (gr). It’s considered a middleground ammunition, one that holds enough stopping power to be effective for home defense and concealed carry, and is still manageable to shoot and handle the recoil – even for those with smaller frames.

Smith & Wesson and Winchester introduced .40 Cal bullets in 1990, just six months after the Federal Bureau of Investigation requested the development of an ammunition with the stopping power of the .45 ACP, but with the ease of use of the 9mm.

A few years before, the FBI switched to the 10mm cartridge after determining .38 Special revolvers – which agents had carried for years – were no longer effective in a modern gunfight.

In 1986, eight FBI agents and two bank robbers were involved in what has become known as the Miami Shootout. Both criminals were killed, as were two agents. Five other agents were shot and injured. The lack of stopping power, the limited ammunition supply, and the difficulty of quickly and efficiently reloading revolvers lead the FBI to seek out an ammunition cartridge that was more effective and lethal.

They opted for the 10mm cartridge and the S&W 1076 Auto. While significantly more powerful, the 10mm soon proved itself too difficult for many agents to control when firing, mostly due to its combination of harsh recoil and large grip size.

The FBI continued its search for a cartridge with less recoil that fit in existing 9mm frames and with the amount of penetration required by its agents. In 1990, the Smith & Wesson and Winchester .40 Cal ammo met these requirements. This new round took the FBI’s standard 10mm cartridge and shortened the casing, lowered the recoil and replaced the large primer with a small primer similar to what’s seen in a 9mm.

The FBI adopted it (briefly) and the caliber was enthusiastically embraced by law enforcement communities around the country. Police forces in Canada and Australia also adopted the .40 S&W and many still use the cartridge today.

Soon, civilians followed, offering their own endorsement of the .40 caliber bullet.

A strong feature of .40 caliber ammo is that it’s a middleground cartridge. Although some consider it a compromise between the .45 ACP and the 9mm, others see it as a useful round on its own.

A .40 Cal round has more muzzle energy and down-range energy than a 9mm, although the same sized pistol in 9mm may hold more rounds since the cartridge is smaller. A pistol chambered in .40 S&W holds more rounds than it could with the .45 ACP, but the muzzle energy of the .45 is considerably higher than that of .40 caliber ammunition.

The .40 S&W strikes the right balance between muzzle energies and magazine capacity, and has been approved by exhaustive testing on the part of the FBI and many other agencies – which has resulted in the widespread adoption of the .40 S&W among the police community. It’s also worth noting that the .40 S&W has been adopted by the U.S. Coast Guard as its primary issue sidearm.

The .40 S&W As a Self-Defense Cartridge

The .40 S&W is also popular with civilians. A wide variety of options exist for bullet weight and design (if a manufacturer produces a new line of self-defense firearms, they typically offer it in .40 caliber).

Civilians appreciate the same benefits of the caliber that made it so popular with law enforcement: magazine capacity, muzzle energy, and limited recoil. With the accuracy of a 9mm, more energy than both a 9mm and a .45 ACP, and improved manageability over the .45, it’s no wonder the .40 S&W has become popular for home defense and concealed carry – as seen in the number of pistols chambered in .40 S&W in compact and subcompact sizes.

Defensive .40 S&W ammunition is offered by several manufacturers – including Federal, Hornady and Magtech, just to name a few. Good quality .40 S&W jacketed hollow point (JHP) ammo may even create hydrostatic shock in a human target, causing vast damage throughout the body, not just where the bullet impacts.

.40 S&W ammo has become so popular among law enforcement, the military, and civilians, that firearm manufacturers now make a plethora of handguns chambered for the cartridge. These pistols often feature a standard double-stack magazine and most full-sized semi-automatics chambered to .40 S&W hold around 16 rounds per magazine.

Here are seven of the most popular .40 Cal pistols:

When it comes to comparisons, the .40 S&W is most often associated with the 10mm. After all, they share the same bullet size and the .40 S&W casing looks identical to the 10mm (except for length). Where the 10mm’s shell measures .992 inch in length, the .40 S&W measures .85 inch. In width, there’s only a fraction of a difference, with the larger shell measuring .425 inch and the smaller .424 inch.

So what does all this mean?

It means that both cartridges offer a significant impact and punch, the 10mm a little more so than the .40 S&W. It means that for self defense and concealed carry, if a shooter can handle the recoil, either ammo works sufficiently.

If a shooter isn’t sensitive to recoil and wants a handgun caliber that can stop a mountain lion or other medium- to large-sized predator, the 10mm is definitely the better option. In the same manner, if the shooter is a 120-pound woman with limited handgun experience, hand her the .40 S&W.

Regardless of its conception, the .40 S&W has proven itself to be a cartridge worth carrying. From its initial design for the FBI through its years of service with the armed forces, the .40 S&W has the necessary power, velocity, and lethal force to handle the needs of law enforcement, the military, and thousands of armed civilians. It provides protection, defense, and plenty of recreation shooting for people across the country who enjoy using it as .40 Cal practice ammo.

History of 40 S&W Ammo originally appeared in The Resistance Library at Ammo.com.