The 7.62x25mm Tokarev is a higher-pressure version of the 7.63mm Mauser, a high-velocity bullet introduced in 1896. The rimless, bottleneck cartridge was originally designed for pistols, but became useful for submachine guns. It was popular with the Tokarev TT-33, used by the Soviet military from its development until the mid-1960s, and submachine guns like the PPSh-41, which is possibly the best-known firearm chambered for this cartridge. It drew the world’s attention, including several national militaries and countries of the Warsaw Pact (e.g., France and North Vietnam chambered submachine guns in 7.62x25 Tokarev).

There are pros and cons to the load. When fired, the bullet widens the channel when it flips, end over end, one time. An upside is that its high penetration is able to pierce car door panels and low-level body armor. The downside is that its high penetration is likely to exit the target while maintaining velocity, thereby causing collateral damage. This is especially dangerous in urban situations.

Over the years, the 7.62 Tokarev has been manufactured in many varieties – from lead ball to armor piercing and incendiary – and has seen action on many different missions that needed a small cartridge with excellent penetration. In the United States today, the 7.62x25mm Tokarev is usually found with hollow point or full metal jacket bullets weighing 85 or 90 grains. Muzzle velocity can range between 1,200 feet per second to slightly more than 1,700 feet per second, giving it an excellent reputation for penetration. Some tests have shown FMJ bullets penetrating as much as 17 inches of ballistic gel, while other test results indicate that a 7.62 Tokarev round will penetrate Level II ballistic vests as well as the U.S. PASGT helmet. This may be why some shooters believe the performance of the 7.62x25mm is superior to modern 9mm cartridges.

In the United States, collectors are the biggest consumers of the 7.62x25mm – buying the cartridge to feed their Tokarev TT-33 and Czech CZ vz 52 pistols. The high velocity of the round and muzzle energy between 400 and 570 foot pounds makes it a valid option for personal protection.

Beginning in the late 19th century, the 7.63x25mm Mauser C96 pistol was at the height of popularity worldwide. In 1908, the Russian Imperial army listed the C96 as an approved sidearm officers could purchase, instead of carrying the standard issue Nagant M1895 revolver.

Between 1914 and 1917, prior to World War I, Mauser pistols and ammunition were confiscated from German and Turkish forces, with the Mauser being used throughout the Russian Civil War. In the 1920s, when the USSR was cooperating with the Weimar Republic, the Tsarist Army bought batches of the smaller Bolo model as well as its ammunition for use by Russian military officers.

In 1929, the Soviet Artillery Committee proposed development of a domestic pistol to be chambered with the Mauser cartridge. Extensive research and development led to the production of the Model 1930 7.62mm pistol cartridge, which was a slightly modified Mauser round. The ammunition became the standard caliber for the Red Army’s pistols and submachine guns. Early models of the PPD-40 submachine gun, designed by Vasily Degtyaryov in 1934, were earmarked for Mauser cartridges.

The cartridges are dimensionally similar, to the degree that they were interchangeable. Then the Russian government significantly raised the power of the Tokarev cartridge powder charge. While the lower-powered Mauser cartridge can be chambered in any of these weapons, the Tokarev 7.62mm load should only be used in firearms designed for the added pressure.

Czech company Sellier & Bellot was founded in 1825 by German businessman Louis Sellier. Son of royalists who had escaped France during the French Revolution, Sellier began to manufacture percussion caps in a factory located in Prague, Bohemia. Sellier’s work, sponsored by Francis I, the Emperor of Austria, brought him overnight success. Shortly after founding the company, Sellier was joined by countryman Jean Maria Nicolaus Bellot. By 1830, Sellier and Bellot had gained international notoriety.

In 2009, Sellier & Bellot was purchased by a conglomerate including Brazilian company Companhia Brasileira de Cartuchos S.A. (CBC), also known as Magtech. Another member is the MEN, a German producer of small arms ammunition for law enforcement, military, and commercial markets.

Sellier & Bellot produce a high-quality version of the Russian 7.63x25mm Mauser. The Soviets manufactured a variety of loadings for the cartridge to be used in submachine guns. These include tracer, armor-piercing, incendiary rounds. This bullet has deep penetration that can pierce lighter ballistic vests and select Kevlar helmets, including the American PASGT helmet. Most guns chambered with this load were deemed obsolete and removed from military use, and from most police and special forces units throughout Russia. Due to military surplus, however, the ammunition may still be in use in Pakistan and China.

There is a common misunderstanding that 7.62 Tokarev military surplus ammunition in the United States utilizes copper-coated mild steel, and that there is an increased chance of ricochets when launched at hard targets. Steel-core ammunition is available internationally, however, the importation of 7.62x25 cartridges containing copper-coated steel bullets is illegal in the United States – federal law has determined them to be armor-piercing pistol ammunition. Ammo advertised as steel bullets are typically lead-core bullets encased in copper-washed steel jackets. These do not increase the risk of ricochet over a standard copper-jacketed round.

In 2018, 7.62x25 ammunition was available for import from Romania, Bulgaria, Serbia, Czech Republic, and Russia.

The 7.62mm Tokarev self-loading Model 1930, also known as the TT-30, is a Russian semi-automatic pistol. Introduced in the early 1930s by weapons manufacturer Fedor Tokarev, the TT-30 caught the eye of the Revolutionary Military Council. After a series of field trials, 1,000 guns were ordered for the troops and the TT-30 was adopted as a service pistol for the Red Army military.

The Soviets allowed officers to replace their Nagant M1895 revolvers with a newer model. While the Nagant had been in use since Tsarist times, many chose to keep it as their standard issue sidearm. As a result, the two weapons were both sanctioned by the government. The firearm was manufactured from 1930 to 1936, producing about 93,000 pieces. It was used until 1952, then phased out in favor of the Makarov pistol.

Almost as soon as the TT-30 was leaving the factory, the designers began to simplify the manufacturing process. Minor changes were made to the disconnector, barrel, trigger and frame. The most notable changes were eliminating the removable hammer assembly and switching over to full-circumference locking lugs. The new design was dubbed the TT-33. Most TT-33s were used by Russian military officers. Like the TT-30, The TT-33 was widely used by the Red Army during World War II.

The PPSh-41 ( pistolet-pulemyot Shpagina “Shpagin machine pistol”) is a magazine-fed selective fire submachine gun designed by Soviet weapons designer Georgy Shpagin. The gun uses an open bolt with blowback action, and was designed as an inexpensive but reliable alternative to the PPD-40. It’s made of stamped steel, and is chambered for the 7.62x25mm Tokarev pistol round.

The PPSh-41 was used extensively in combat during World War II and the Korean Conflict. And it had a major presence amongst the infantry weapons of the Soviet Red Army during World War II – with approximately six million PPSh-41 submachine guns manufactured for use in the war. A licensed Chinese version was still in use by the Viet Cong (National Liberation Front) as recent as 1970, and according to the Encyclopedia of Weapons of World War II (2002), the PPSh-41 was still used by “irregular militaries.”

Manufactured by Crvena Zastava in 1957, the Zastava M57 pistol was the standard issue sidearm of the Yugoslav Army. It is a short-recoil-operated, single-action firearm chambered for the 7.62x25mm Tokarev cartridge. The locked-breech pistol, a licensed copy of the TT-30, uses a Browning-type action that can accommodate nine rounds. In 1970, Zastava began to manufacture the M70, which had a similar design but was chambered a 9x19mm Luger.

The firearms continue to be popular surplus weapons in the U.S., and are still manufactured today. Although the M57 is a copy of the TT-30, its magazine is not compatible with Tokarev pistols or copies, as those weapons tend to use eight-round magazines.

The Soviet P-41 was a 74 grain, incendiary round manufactured for use in the PPSh-41 and PPS-43 submachine guns during World War II. This steel-cored ammunition would achieve a velocity of 1,600 fps when fired, the correct velocity known to penetrate mid-grade armor.

This, and other versions using the Chinese standard loading, is referred to as Type 51 – followed by Type 54, M20, and TU-90. Norinco also manufactured a commercial model variant of the Tokarev pistol, known as the Tokarev Model 213. It was chambered in 7.62x25mm, followed by a second model chambered in the more popular 9x19mm Parabellum cartridge.

The Norinco version, while in current production, is unavailable in the U.S. due to import bans on Chinese firearms. However, older models of the Model 213 that were imported in the 1980s and 1990s are relatively easy to find.

The CZ vz. 52 was introduced in 1952 by two brothers, Jan and Jaroslav Kratochvíl, who had designed the weapon for the Czechoslovakian military. The CZ 52, also referred to by the Czech military as the CZ vz. 52 or “model of 1952,” is a semi-automatic roller-lock delayed blowback Czech pistol featuring a detachable box magazine chambered for the 7.62x25mm Tokarev load. It weighs approximately two pounds when unloaded. Originally, the brothers had designed the gun to be chambered with for 9x19mm Parabellum, but political pressures forced them to redesign the pistol to match the Soviets’ standard issue pistol cartridge.

Approximately 200,000 CZ vz. 52s were produced by Česká Zbrojovka from 1952 to 1954. The military eventually standardized the the round. And after 30 years of service, the CZ vz. 52 was replaced by the 9mm Makarov.

Type 80 is a machine gun designed in China in the late 20th century. It was based on the Mauser C96, which was widely used throughout China beginning in the early 1900s. The Type 80 is chambered for the Type 51 (Chinese replicas of the Russian 7.62x25mm Tokarev cartridge). But instead of the C96’s 10-round undetachable magazine, it uses a 10-round or 20-round detachable box magazine. It has a firing range of just over 100 yards and a muzzle velocity of 1,542 fps.

History of 7.62x25mm Tokarev Ammo originally appeared in The Resistance Library at Ammo.com.

Although the M57 is a copy of the TT-30, its magazine is not compatible with Tokarev pistols or copies

not true
the M57 magazine will work in the the TT33 - it just sticks out, however the TT33’s magazine is too short to fit the M57
there are a few other differences such as a captive return spring also.

If you’ve got a barrel (1in8 twist, chamber tweaked a little for longer projectiles) and magazines set up for it, there are various possibilities for reloading. 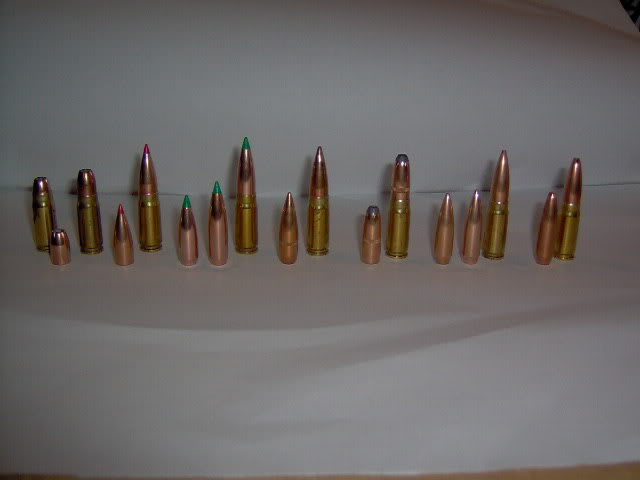 If you are limited to standard 7.62x25 magazines, things are a bit more limited, but there are still some interesting possibilities for heavy, subsonic loads. 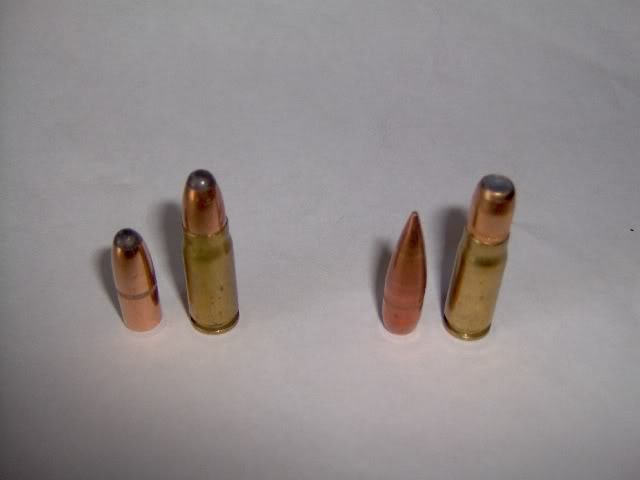 Edit: A 20 round AR magazine modified to feed the longer loads (front of follower trimmed and a nylon spacer inserted in the front of the mag): 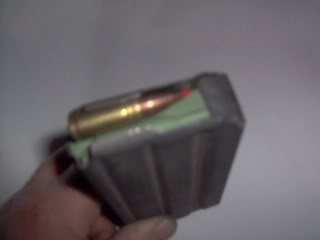 Thanks for that feedback! I’ve sent it to the writer.

This is brilliant, thank you!

Teppo Jutsu made my barrels and opened up the 5.56mm bolt faces slightly.

It’s been a while since I’ve tinkered with them, and I lost some of my load data to a hard drive crash, but I think the heaviest load I got to cycle the AR bolt, was 180gr. If my memory isn’t off, Teppo Jutsu came up with some functional loads that were around 210gr, but they used projectiles that weren’t stocked by the places I usually ordered from.

With my loads, 147gr to 150gr tended to be the point where the loads shifted to subsonic, with the loads lighter than 147gr still being supersonic.