Hockey Puck Fantasy Versus Bleeding Reality to Defend Our Schools

The topic of school security came up at a faculty meeting at Oakland University in Michigan. Someone said they should fight back against an attacker on campus. That sounded like a good idea. One Pennsylvania school gave each classroom a bucket of rocks with which to fight off an intruder. The Oakland faculty passed a proposal to issue hockey pucks for school security. The local police chief might have planted the idea. A common classroom demonstration uses tennis balls against an attacker who is armed with an airsoft gun.

I’ll give the professors an A+ grade for creativity. Unfortunately, anyone with practical experience would have serious doubts about the real-world effectiveness of hockey pucks against an attacker armed with a firearm. Too often, academicians love their fantasy model of the world more than facts. I doubt the school administration will ever test the effectiveness of their hockey puck “security”.

No one who studies institutional security would propose handing out hockey pucks to defend a politician , a celebrity, or a business executive. Someone with an ounce of integrity would at least ask to test this hockey puck proposal by taking video of a simulated attack using airsoft guns and tennis balls. Failure is only a matter of life and death.

I am a shooter. I also study school security, so I will predict the results of that simulated test. An amateure sportsman could repeatedly shoot anyone who isn’t hiding in the “hard corners” of the classroom. The “hard corners” are the corners that can’t be seen until you’ve entered through the doorway. I teach my self-defense students that a gun is a distance tool. In this case, the attacker never has to enter the classroom to kill unopposed.

I give the professors a failing grade, an F, for actual performance. That isn’t the answer they wanted and it isn’t fun to tell someone they failed. This issue is too serious for false evaluations, for a social “pass”.

Real solutions are hard. We spend between a quarter to a third of the cost of school or municipal buildings on meeting fire and other safety code requirements. Those requirements are effective. It has been almost six decades since a student was killed in a school building fire. In contrast, the attack at Columbine High School was 19 years ago. We’ve yet to incorporate physical security requirements into our building codes for schools, churches and municipal buildings.

Unarmed security is, frankley, a contradiction in terms, but hockey pucks did what they were supposed to do. The security-theater kept the voters amused and distracted… so far. Who will be held liable for the lives this charade might cost? Given that it is a state school, the state’s attorney will say the security failure was unimaginable and that that the state is immune from prosecution or lawsuit.

That is negligent. Stop playing political games with our children’s lives.
~~
The original article is here.

an attacker who is armed with an airsoft gun, must have been a fun scenario to play out with tennis balls

Are you kidding me?! A bucket of rocks?!

That asshat politician who came up with that bucket of rocks (I forget his name) should only have security provided to him with kids and a bucket of rocks.
All of these idiots should.
As Hollywood held a massive gathering to pat themselves on the back and to speak of disarming the nation, they had somewhere close to 400 armed police and security protecting them.
Take it away… take away their “walled” mansions… (not the mansions, just the walls and fences)
Take away everything they bitch about that the common folks have to deal with. Take away their clean water… safe streets… armed guards… armored vehicles… security cameras… etc.etc. etc.
Same thing with EVERY politician who votes against the Constitution

That asshat politician who came up with that bucket of rocks (I forget his name) should only have security provided to him with kids and a bucket of rocks.

just a play date with kids and rocks,

The scenario of tennis balls vs airsoft showed that defenders are harder to kill if they fight back with anything at hand.

The scenario of tennis balls vs airsoft showed that defenders are harder to kill if they fight back with anything at hand.

In truth it would have only shown that someone armed with a tennis ball in hand and waiting to be attacked is harder versus the bucket and being surprised.
Trying to throw and hit an advancing target coming towards a door versus said shooter shooting at targets of opportunity places the advantage to the offensive side (shooter).
Besides that tennis balls, rocks, hockey pucks or hole punches don’t go bang which is more of a physiological deterrent than any thing being flung.

Just be extremely thankful that we do not have a group of killers that actually know what they are doing go batshit crazy or go on a terrorist rampage.
We are so open here in the US… my dad told me 30 years ago to watch out. This is why I do not go out much where there are a lot of people. To fricken dangerous.

This is why I do not go out much where there are a lot of people. To fricken dangerous.

^ This. If we have to go to a mall or a crowded are of more than a dozen people I’m constantly “evaluating” people, exits and possible cover locations. It isn’t paranoia, it is preparation.

Black [LMAO] Friday saw 2 shootings at 2 malls in The Peoples Republic Of NJ. Yeah the ones in or near the demoncrap shitholes.
Where they are -------- I am not.
This is the new mall norm - shop online 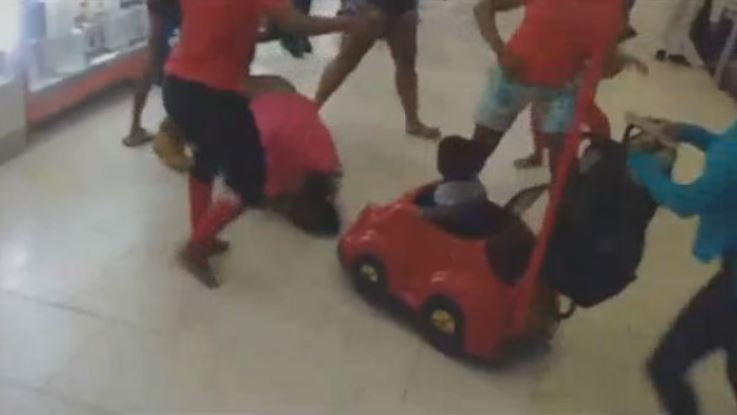 VIDEO: Child in stroller caught up in mall brawl in Fort Myers

The graphic video shows a group of people erupting in chaos during the busy holiday shopping season.