If given the choice would you use either a bullpup, a sbr, or a brased rifle pistol? Then why do you prefer the choosen rifle? Finally give an example of your choosen rifle?

I personally would choose a bullpup primarily to avoid the legal issues of owning and operating the other two choices, when shouldered a bullpup has less mass exposed in the hand guard area, and because bullpups look kinda cool. However As to which bullpup I would choose I am debating between the iwi tavor and the steyr aug. but that’s me what are your thoughts and choices? Can’t wait to see what you guys come up with.

Get an MDR instead of a Tavor or AUG because both need tons of upgrades and from a cost effectiveness perspective aren’t worth the investment. The MDR is truly ambi and uses more advanced technology than either the Tavor or the AUG. It’ll also cost you less because it doesn’t need any third party after market. Anything made by IWI is highly overrated and overpriced. The AUG is dead, parts are hard to come by and very expensive. Get the MDR and call it the day.

An SBR or BullPup aren’t really needed for HD, IMHO. While I do believe carbines are better suited for HD due to ballistics and other factors, than pistols or shotguns, their length is not a concern.

Let’s be honest. You’re not kicking doors, slicing pies and clearing rooms. If your team is stacked 5+ deep behind some Hulk with a door ram ready to swing, those smaller platforms make sense. For grabbing your kids, dragging them to a safe room and hunkering down…Not so much.

I LOVE me some AUG action, don’t get me wrong, they just ooze cool. They are not, however, very ergonomic. Most BP’s aren’t. Yes, the ergos have gotten better over the years from the early days of BP’s. Yes, triggers have greatly improved. That doesn’t change the fact that they just don’t balance right or that they are awkward to reload compared to standard carbines.

Where did you get a hold of that one?? Through an agency poc?

The gun is from a preban Forestry Service purchase. They were surplussed out with extensions as normal rifles. The extension was removed when it was SBR’d by myself.

That’s amazing, man. I hope you can get parts through SIG. I’ve always wanted a 550 series myself. They’re one of the best, most reliable and most accurate guns in the world. What ammo do you use for it? 55gr TBBC I assume? (since it’s an SBR set up for HD)

Mongo you’ve got one sweet rifle and I pretty sure it will make heads turn at the range. Good on you for getting a cool gun. 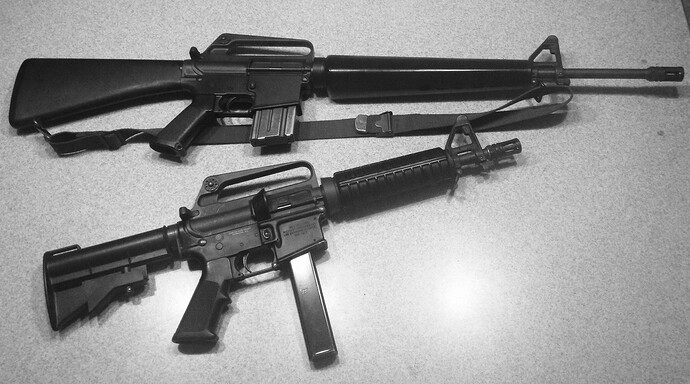 Compact, round less likely to over penetrate.

Long weekend…yeah!!!
I tend to enjoy building…maybe more then shooting…LOL Anyway I did a 14.5 barrel with a pinned/welded flash hider to keep everything legal and short as possible. Other end a Troy collapsible stock that came with a dedicated BCG to keep that as short as possible without running into SBR. I make the min. OA length of 26 by an extra 2 inches. Works well, more then accurate enough. I am sure it will be put on the back side of the safe in time.LOL. EVO looks good as a SBR and some sound reduction, So many options, so little money…

I understand where your coming from and no I do not plan on fighting in the streets of Fallujah or musal Iraq. The ergo’s of a bullpup are not as comfortable as a traditional rifle, but with training one can use a bullpup just as well a conventional rifle.

I however disagree with just hunkering down and waiting for either the police to arrive or the intruder(s) to leave. Instead I would prefer a more aggressive approach by directly confronting the intruder(s) to eliminate the threat. Now the last phrase “…eliminate the threat.” Has a variety of interpretations from unofficially arresting the intruder(s) to killing them, which is an extreme interpretation and option. I would rather have the intruder(s) on their knees with their hands on their heads disarmed if necessary, so that they may face legal punishment and perhaps a second chance at life. But hey that is my opinion and you are entitled to yours just as I am to mine so let us agree to disagree if even after a logical conversation our opinions differ on the matter.

[quote=“Lupus1996, post:12, topic:676”]
I however disagree with just hunkering down and waiting for either the police to arrive or the intruder(s) to leave. Instead I would prefer a more aggressive approach by directly confronting the intruder(s)
[/quote]Discretion being the better part of valor and all that…Unless you have the rifle slung on your person while doing the dishes, you’re going to have to retrieve it anyway. That or have multiple rifles staged throughout the house. Even as someone who has a G19 on his hip while on the couch watching Family Guy, I have to question the level of paranoia having multiple long guns scattered throughout ones home.

That’s also assuming you’re awake when a home invasion happens. If you are in bed, AND DON’T HAVE CHILDREN TO GATHER UP, why take the risk? Remember, the intruder is WIDE AWAKE…You…Not so much. [quote=“Lupus1996, post:12, topic:676”]that is my opinion and you are entitled to yours just as I am to mine[/quote]No argument there, simply expressing my point of view in a hope of showing both sides.

The only upgrade I put on my Tavor was an EOTech XPS2. Everything else is bone-stock and it is a good rifle, although can be a little finicky with XM193. Works well with M855. A lot of people complain about the trigger being heavy, but it is not a competition rifle and doesn’t need a competition trigger.

Handled it, didn’t like it. I don’t like bull pups. They just feel weird to me and I like a variable length of pull. I’ll stick to ARs. 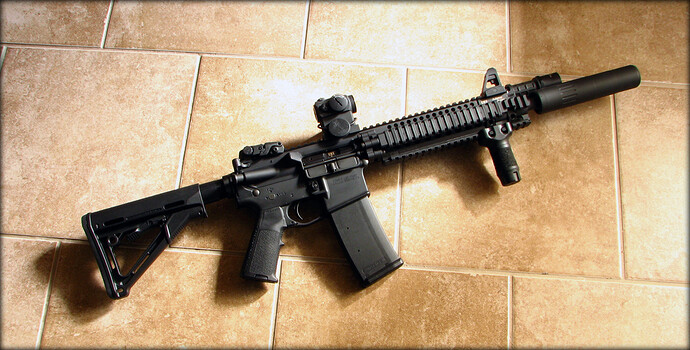 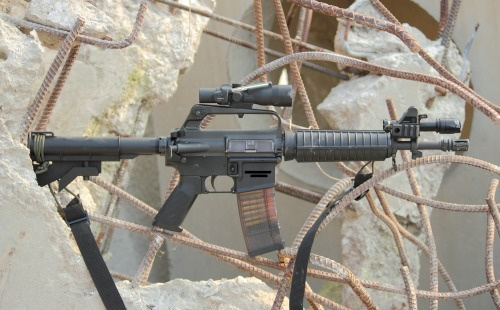 I choose the SBR over the pistol because I’d want the option of a collapsible stock over the pistol brace. I choose the SBR over the bullpup because a) I don’t really like bullpups, and b) generally I’ve found a good SBR will be cheaper than a good bullpup (like a Tavor or X95, the only bullpups I like) after customizing it with optics and lights. Also, I can work on a traditional AR over a bullpup easier. I don’t want to have to explain to the cops about the pistol brace on a pistol after a legal shooting, and I don’t want to monkey around with the internals of a bullpup. So AR SBR because I like it better, I understand it better, and I don’t care about $200 tax stamp, 3-9 month wait and all that Jazz. I like the SBR.

^ This. 9mm PCC (pistol caliber carbine) for the win! Especially in an SBR configuration. Exactly the reason why I have a Hi-Point 995TS for this exact situation, though it isn’t an SBR. I’d also like to get an AR in 9mm as well…because, 33rd Glock mag.