How to Properly measure Enfield 303 Headspace

Lots of research went into this and finally I have found the way to do this.
First SAAMI specs are too tight from and always have been.
This has been stated by numerous Enfield experts and differ from the arsenal specs given by the manufacturers of Enfields.
That being said the proper headspace for an Enfield as per Commonwealth specs is as follows:
0.064 to 0.074 with 0.084 allowed for a War Spec.
Why?
Enfields are built to allow the manufacturers of ammo some leeway on the case rim thickness.
Since most American Manufacturers build to the SAAMI spec most will not pass European inspection as the rim is too thin.
Why allow a thicker rim?
Breach machining tolerances.
A perfect depth breach cannot be machined and will vary slightly. Even today’s machines cannot produce a depth that is exactly the same all through the circumference of the bore.
That is why there is run-out, and depth specs allowed for any round area or bore.

So back to the Rifle and the 303 Brit.
How do you measure it?
This is best explained with a drawing.
I did this in excel and by no means to scale. 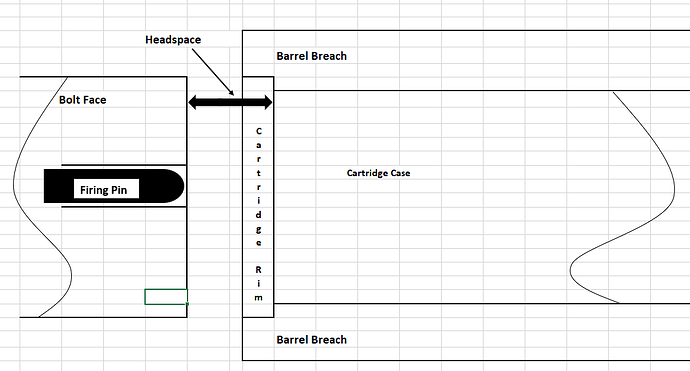 First remove the Extractor.
Second take a fired cartridge and insert it into the chamber.
Next use a piece of solder and lay it across the cartridge face where the bolt will interface.
Leave a length to hold on too.
Close the bolt on the cartridge and then open.
The solder will smash to the size of the gap between the bolt face and cartridge rim.
Measure the rim in several places of the cartridge and average it.
The two added together is your headspace.
So on my #5 Enfield the gap measured 0.0225.
The Rim of the cartridge averaged 0.059.
0.0225 + 0.059 = 0.0815
So my Enfield is 0.0025 within War Spec and still can be shot safely.
However I want to mention that when rimmed brass is shot it stretches to seal in the chamber.
If I reloaded 303 (I don’t) then full length case re-sizing would eventually keep this brass stretching and getting thinner to the point of failure.
So if your Enfield is like mine then don’t resize the case just the neck.
Or don’t reload it at all as I do.
I have shot hundreds of rounds through this from Cordite charged to Flake powder charged.
No issues.

I would like to thank all the resources I used to gather this info but there was just sooo many.

infantry spec was to shoot it until you started to get hard extractions and case separations - at which point you took it to the armouror so it could be FTRd or or you were issued a new rifle.

So now to the Idea and questions.

Is there such a thing as Too Little Headspace on these rimmed cartridges?
I noticed if I turn the bolt head out one turn it leaves a gap of 0.052 between the bolt head and the body.
I already have the #3 bolt head.
Although still in Commonwealth War Standard what if I wanted to start reloading or just reduce the gap?
Barrel turning down is too costly.
I do not want the forces being exerted on the bolt head Threads either.
But what if I placed a shim between the bolt head and body?
That bring the question up if there is too little headspace?
If I did this it would reduce the headspace to 0.0295.
This would not allow me to chamber obviously the 0.059 cartridge.
But as this chart shows I may be able to find a bolt head now.
0.0295 + 0.026 (difference between #3 Max head and #0 Minimum) = 0.052 just under my rim thickness.
So this tells me with the shim and one turn out of the bolt head If I exceed the commonwealth War Spec I have a good chance of restoring my headspace.
All I need is to exceed 0.007 war spec and and I can bring it back to 0.064 minimum spec.

I am seeking comments on this and do not recommend it yet as I have never tried this.

do not barrel turn and do not rotate the bolt head.
the chart is not a sizing but a testing sample …
the rifle is designed to work with some real wide gaps.
you have to remember that the chamber has been proofed to 18.5 tons and recently watch a .303 that had been reamed to 300 win mag and oiled cartridges shot until failure - what failed you ask…
A 70 year old casting flaw in the locking lug.
You shoot it until you start to see hard extractions, separated casing and primer deformity

I saw the video you are talking about. Pretty interesting.
I am not concerned about mine as I dont reload and it is still within War Spec.
I have tons of ammo through it with no issues.
I am just thinking ahead and perhaps trying to solve an issue others have.
IV8888 had one where the case head separated during firing.
That’s what started me thinking about a fix.
Parts for these old war dogs are not being made new as with many old dogs.
It is sad because the history of these goes way back.
And retiring one to a wall hanger just isn’t right.
The chart shows a cross section of measurements of the different size bolt heads which vary surprisingly a lot.
There is a #4 as well but scarce as hens teeth.
0 and 1 is plentiful and cheap as well.
The rest not so much.
Re-shouldering is the fix but not cost effective.
Just looking for a better way to keep the ol brit hounds runnin.

I bought DP rifles for parts… it has kept my Enfields running for years.

That’s where the cost effectiveness comes into play.
And the bolt option is a crapshoot at best.
There are no new bolts and all out there are used.
One thing that needs to be addressed is the lug wear.
If the lugs are worn then a new bolt is in order.
But again there are no new or NOS out there.
Just throwing ideas out there that make these ol bulldogs cost effective and still shoot-able.

in truth this is a “But Adam” moment and it would be closer to the service life of the rifle and “extending” it. And the question would be why? At that point you just give a good oil bath and linseed rub down put it away.

All good feedback.
I appreciate it.
I guess this is an idea that wont work out.