Hello everyone. My name is Dan. I’m a life long firearms enthusiast who is now retired/disabled. When I became disabled I was forced to change how I deal with my passion for firearms. No longer able to run competition I switched to activism and online. In this I created a page on FacePuke, grew it to over 115k followers, only to have it deleted. Also had several groups well over 10k each deleted. YouJoke hasn’t been a whole lot better. That’s about 7800 subscribers right now. Late last year I got a three month suspension for two videos that had bumpstocks in them, both were nearly three years old. Now I’m on a 30 day suspension from AdSense with a 60 day hold on my funds. I’m done with YT, only post podCasts there now. I’ve grown tired of the restrictions placed on us by the big boys of the Internet, Google, Yahoo, Bing, FacePuke, YouTube, all of them.

I’m really excited to get our channel here approved, https://www.full30.com/user/tactical_reviews Will be nice to have a safe place to build without fear of having all our work destroyed with the click of a mouse. 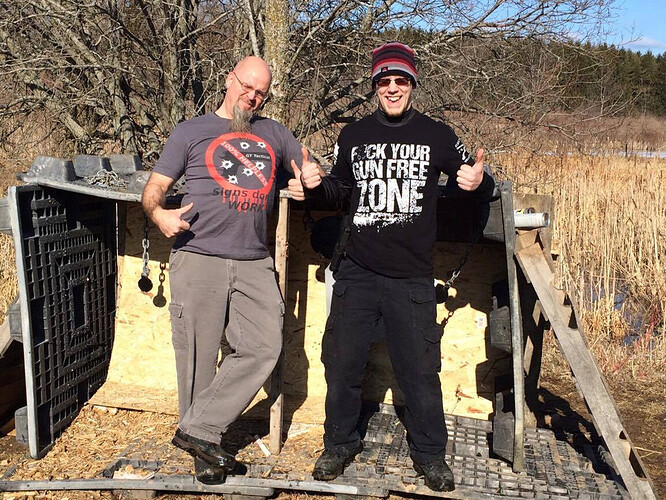 Sorry to hear about your experiences with Faceberg and —tube. As you know, Goolag owns —tube. Both Faceberg and Goolag were funded by in-q-tel. Their website is iqt.org. They are the CIA’s venture capital arm. Once a company agrees to take funding from In-q-tel, they relinquish top level strategic control over their own company. If you take their money - you have to accept their control over you.

As a consequence we are now seeing a coordinated effort to destroy your rightS. This is only beginning with your 2nd Amendment. If they succeed there, they will then destroy your 1st Amendment and we will all find ourselves living in a China-like “USSA”.

In China, they are actively punishing people for WRONG-THINK. Everyone there is ranked based on a system they call “social credit” that uses a “Secret Algorithm”. One of the items you are ranked on is your “conformity” and whether or not you have ever said anything that disagrees with any government “Official Story”.

They PUNISH you by:
Restricting your travel;
Banning you from flying or getting the train;
Throttling your internet speeds;
Banning you (or your kids!) from the best schools;
Stopping you getting the best jobs - or any job;
Keeping you out of the best hotels;
Being publicly named as a bad citizen

This is happening now.

I may have serious health issues, but I will still fight to the end to keep our rights. I will be in Madison Wisconsin this Saturday for the 2A march. Great having a lot of local supporters that are willing to pick me up.

I may have serious health issues, but I will still fight to the end to keep our rights.

One thing you need to know. The recent "mass shootings’ have been stage-managed by the Department of Homeland Security’s “National Exercise Division”.

The use of Staged Atrocity Propaganda is legal. We not only see it in places like Syria, but they are using similar Propaganda techniques here.

This is not a “conspiracy theory”.

The FACTS prove this. Each and every one of these staged events is accompanied by a pre-planned “drill”. Then, the event is transmitted to to public as though it were “real” for the purpose of giving political cover for the destruction of your rights.

That is what the US has devolved into.

But, but, that can never happen here.

History doesn’t repeat because people forget it, history repeats because people believe they are enlightened, more evolved, believing they can’t make the same mistakes. These people call others crazy, they ridicule us. They doom not only themselves to repeat history, but everyone else as well.

History doesn’t repeat because people forget it, history repeats because people believe they are enlightened, more evolved, believing they can’t make the same mistakes. These people call others crazy, they ridicule us. They doom not only themselves to repeat history, but everyone else as well.

Can you help me learn what you know/how you know what you know, by provided some supporting facts and figures, videos, and/or anything else you can so I can be better aware of what all is really going on around us?

I hate to be duped or fooled by people with hidden agendas. Thank you.

Sorry to hear you have had so much trouble in youtube and facebook. Their loss, our gain.

Welcome to Full30. I look forward to your videos. 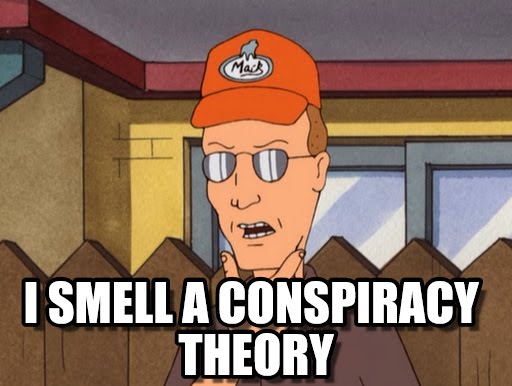 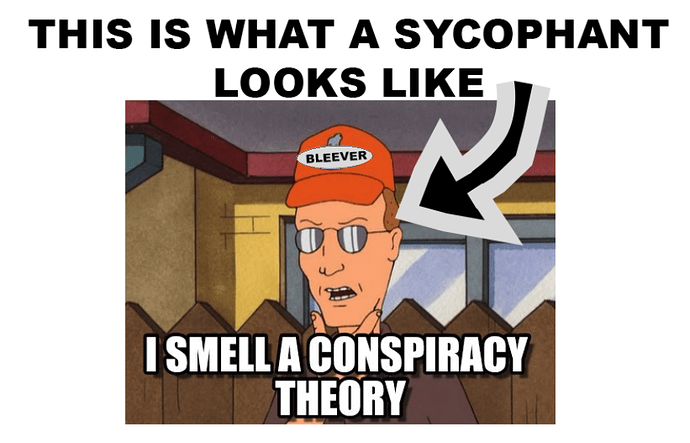 Welcome new member @Tru. Would you be referring to Dale Gribble or Rusty Shackelford? 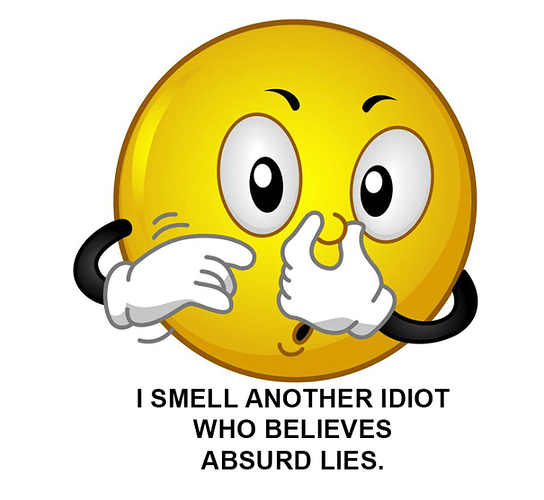 I’m not quite sure what is happening here but it’s funny. Lol.

Welcome! Its frusterating that people put hours into making videos to share information with others, only to have them removed. I personally spent hours editing a series on handloading and stopped before uploading to the biastube when they announced changes. Full30 has been a long time coming and its looking good so far!

Do we have a troll among us? Of is my coffee not working yet.

So welcome @Tru I’m trying to take things in context here. You’ve made only two posts that while entertaining are a bit cryptic. In the context of this thread I’m guessing you think Miso’s comments smell of conspiracy theory. While I think he may be a bit paranoid, all conspiracy theories are based at least on a grain of truth. His comments on China for example don’t ring true to me as I’ve been there quite a number of times on business and know a good deal of people there who have done well who don’t at all agree with the government. That said, China is in fact a crooked, corrupt nation.
You are new here and we know nothing of you. So your two meme based posts that only poke at other members (and again no one is sure who you’re referring to) makes it hard to understand your intent.
We have a thread for new members to introduce themselves. We’d all like to know your history with and interest in firearms and all things 2A.
So welcome again. Hope you like it here.

I have to assume that you probably confined your visit to Bejing? There is a LOT more “China” than that.

For example, in northwestern China - the Chinese government is, in fact, using the methods that MISO described against the Uighur people.

The Chinese government is actively stamping out any and ALL types of what they call “separatism”.

It is typical to encounter a police blockhouse every 100 yards as a pedestrian. Video cameras on street corners and lamp posts recognize your face and track your movements. At multiple checkpoints, police officers scan your ID card, your irises and the contents of your phone. At the supermarket or the bank, you are scanned again, your bags are X-rayed and an officer runs a wand over your body — at least if you are from the wrong ethnic group. Members of the main group are usually waved through.

This is happening there TODAY.

As far as the term “CONSPIRACY THEORY” goes… do you know where that pejorative term originated?

It came from here:
http://www.jfklancer.com/CIA.html

If you are prone to blind belief in every blatant lie told to you by media sources - that’s fine and that makes you the “typical American”.

After all, most people are “C” students or worse.

Do you realize how dumb you have to be to be a “C” student? That’s near retardation.

It is obviously unproductive to attempt to educate the (m)asses on how Political Warfare and Information Warfare work.

Of course, it is “safer” the the village idiot to never venture from the “Official Story” and to “Believe” that string pullers in their ever benevolent government would never lie to them.

After all, anyone else is instantly labelled as a “Conspiracy Theorist”.

So what do you think we should call people who are too dumb or cowardly to connect the dots and recognize an officially sanctioned lie?

Hmmm. Right off the bat is seems your a lousy assumer. Never been to Bejing. Dongguan and Shenzhen mostly. And a few other spots who’s names I don’t recall cuz I was tourist there. My comments were that some of what MISO said don’t ring true to what I’ve seen. So at best his comments could be correct but do not encompass the whole of China. The people I dealt with there, while doing well, were out spoken (possibly not publicly) about the corruption of the government. They have to pay off a lot of low level political admins to do business.

Regarding the term Conspiracy Theory: A simple google search shows a plethora of the terms use back to the 1800’s. Not 1967 in the document you reference.
Start here: https://www.metabunk.org/debunked-the-cia-invented-the-term-conspiracy-theory-in-1967-in-use-for-70-years-prior.t960/

My questions to you were based on the fact that your limited posts were meme driven and seemed to be calling out someone (MISO perhaps but that’s still not clear) as being a conspiracy theorist. Which I don’t think he is. Nor anybody else here from what I’ve read.

There was some speculation that you may be a bot. Your reply here proves that’s not the case. What I (we) still don’t know is about your interest in guns and the 2nd amendment. (Those being the major point of this forum.)

So we’re interested if you’ve got something to discuss but it may be doubtful simple vague memes and apparent rants will be overly welcome here.

As to your last question: I’m going to modify it a bit then answer.
So what do you think we should call people who are too dumb or cowardly to have a civil discussion?
Answer: Tru

I’m so torn on getting into it. @Tru did spend a lot of time messing with Dale Gribble…

I just wanted to say it’s great that you guys are posting in my hello thread. But it’s always a good idea for new members to start there own hello, this is me thread. The reason for that is if gives you the opportunity to tell us about yourself and answer questions without muddying up and getting lost in other threads.

So start a thread, tell us what you like to shoot, what you hoping to get, do you reload, do you shoot comp, hunt, self defense. Are you new or experienced? We’re here to answer questions and help all we can.